Spanish Fork City is one of 30 cities currently participating in the Utah Wellbeing Survey Project in 2021. This project is designed to assess the wellbeing and local perspectives of city residents and to provide information to city leaders to inform their general planning process. It is important to note that the 2021 survey was conducted during the COVID-19 pandemic. This was intentional as the last round of wellbeing surveys were conducted in 2020 prior to the pandemic. This allows us to assess changes at this unique period of time. Future surveys are anticipated to gauge recovery.

What is in this report?

This report describes findings from the 2021 Spanish Fork survey as well as some comparative information with other project cities. Feedback from city leaders and planners is welcome. We will continue with analysis and reporting.

How was the survey conducted?

In January and February 2021, Spanish Fork City advertised the survey via monthly newsletter to all households, social media, survey panel, and city website. All city residents age 18+ were encouraged to take the online Qualtrics survey.

How many people responded?

Overall Personal Wellbeing and Community Wellbeing in Spanish Fork were above average among 29 study cities. Age, gender, and religion were influential factors related to wellbeing.

The majority of respondents felt Population Growth was too fast, but attitudes were more divided about the Pace of Economic Development.

Top concerns for the future of Spanish Fork were: 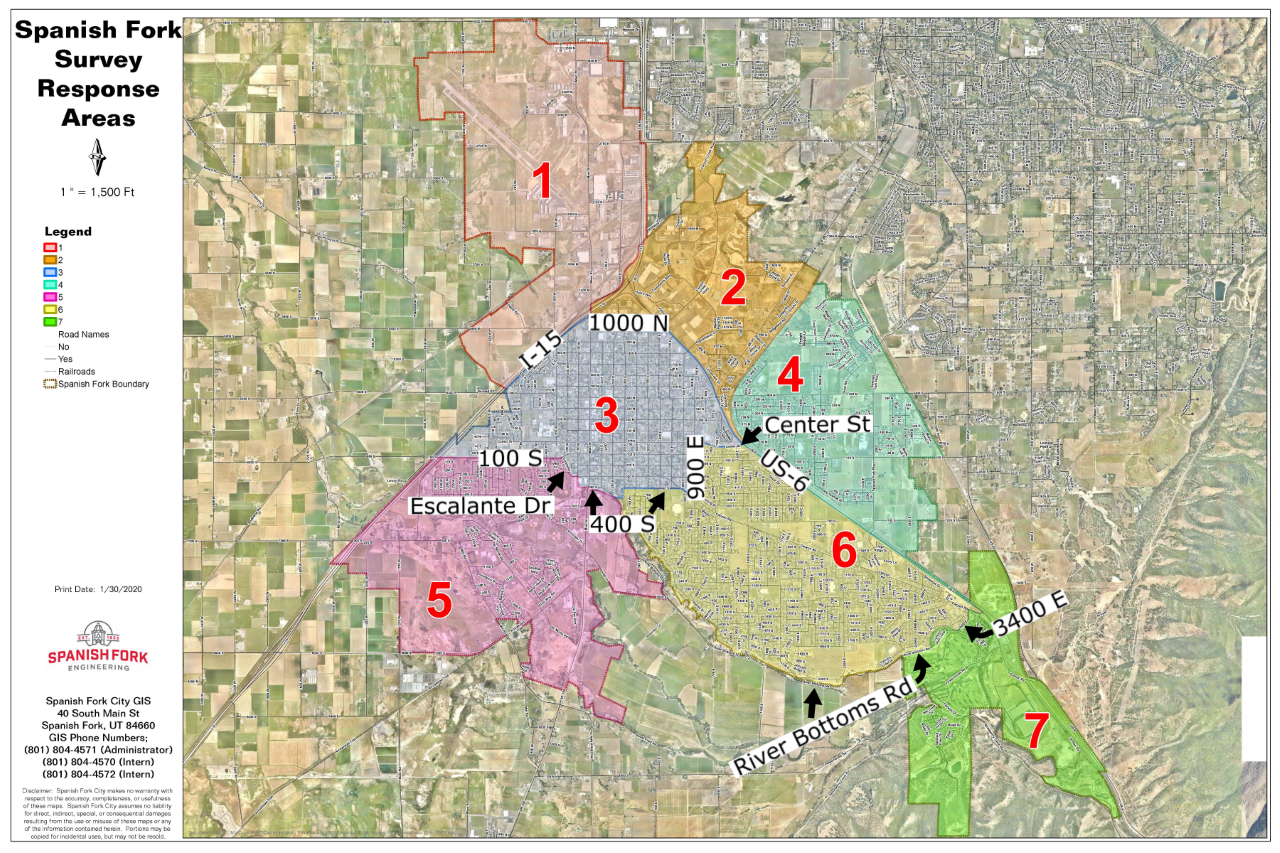 Demographic characteristics of the survey respondents are compared below with U.S. Census information from the 2015-2019 American Community Survey. As the table shows, survey respondents were not fully representative of Spanish Fork. People who are female, have at least a 4-year college degree, are married, have children in household, and own their home were particularly overrepresented. People age 18-29 are particularly underrepresented. Not all respondents provided demographic information. Weighting was not used in any of the analysis for the findings presented below. Updates will be provided later in 2021 to account for weighting by demographic characteristics. 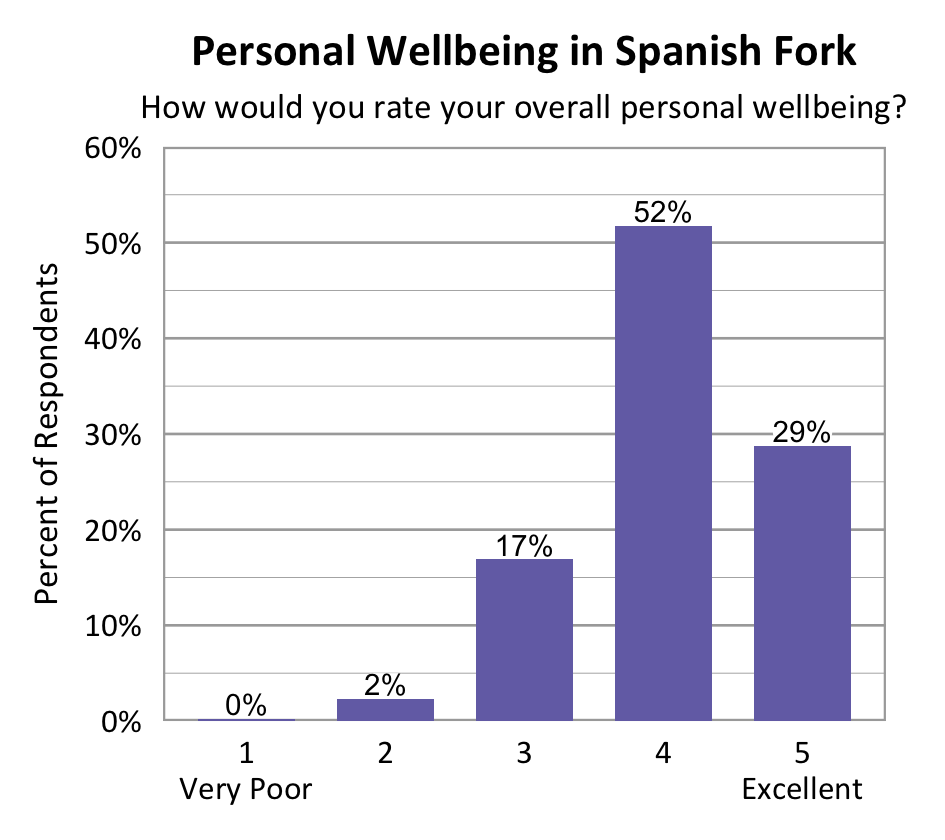 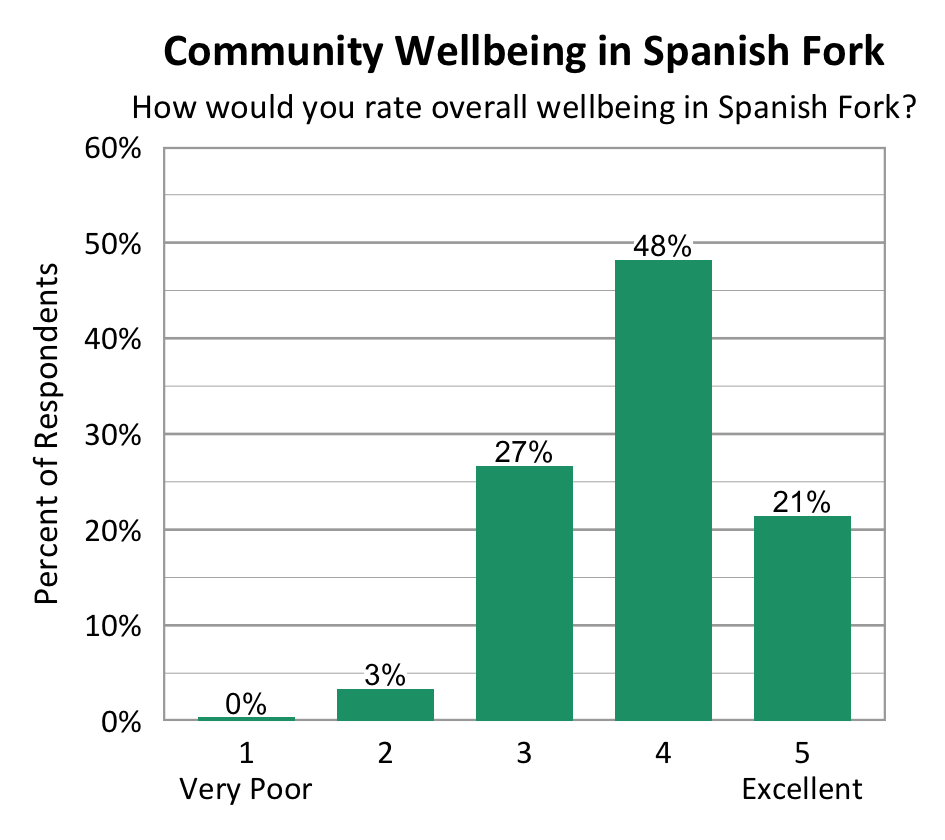 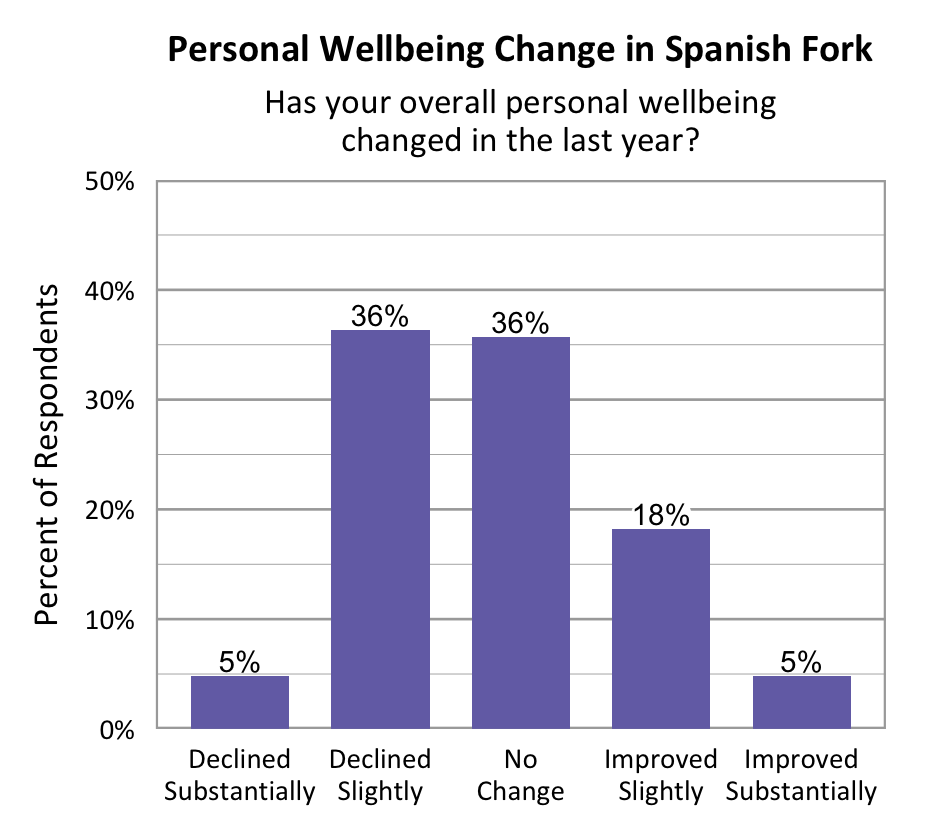 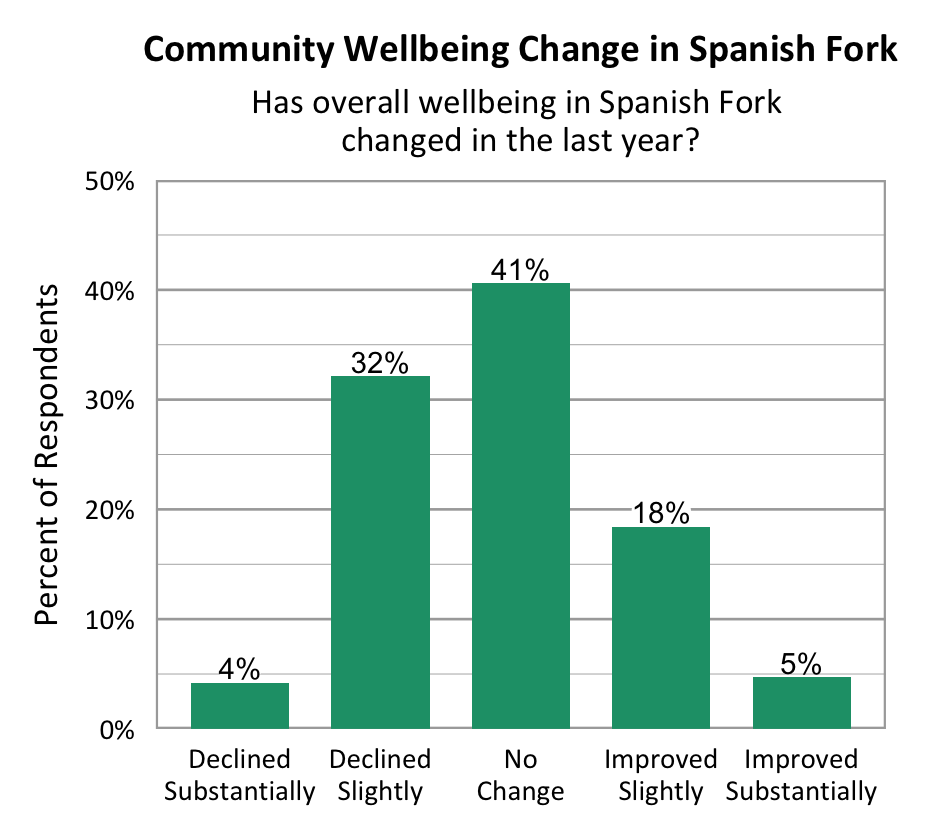 The Utah League of Cities and Towns classifies Spanish Fork as a Rapid Growth City. Within this cluster of cities, Spanish Fork falls above average in terms of the average overall personal wellbeing score and average community wellbeing score. Spanish Fork is not statistically significantly different from the other cities in this cluster in terms of overall personal wellbeing, but it is significantly higher than Lehi, Santaquin, Nephi, Ephraim, and Herriman on overall community wellbeing. 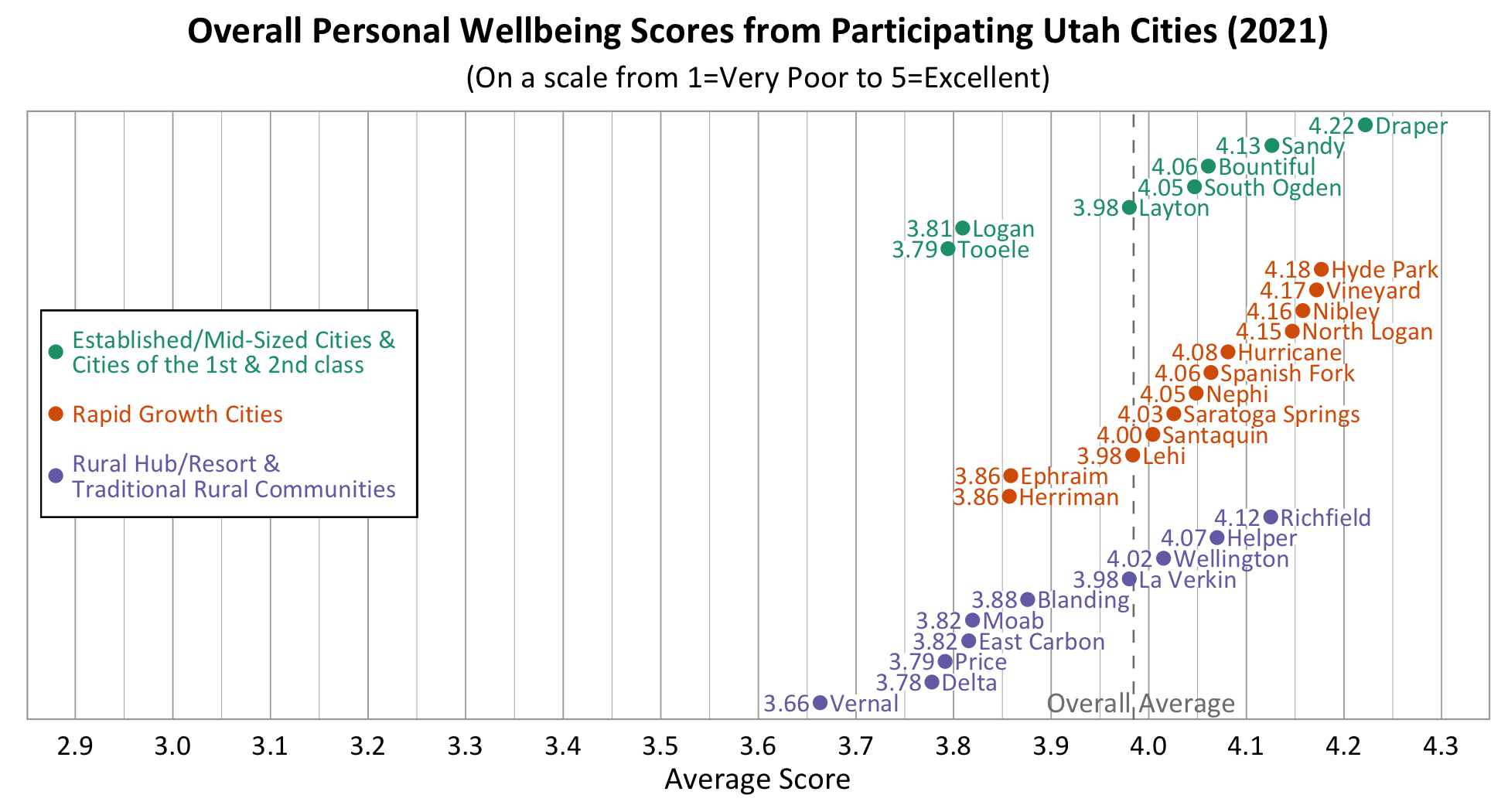 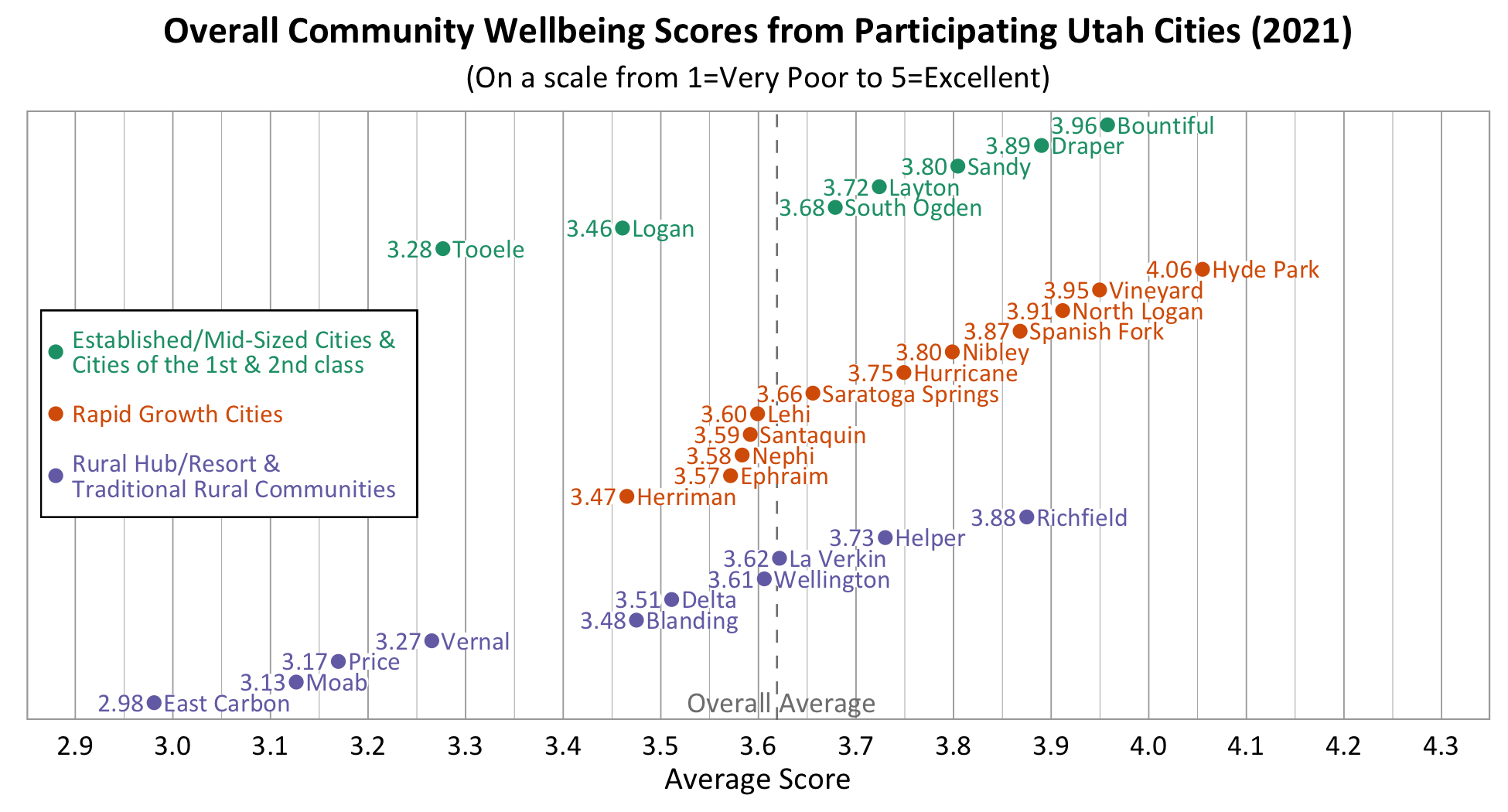 According to national and international entities that track wellbeing, there are a number of common dimensions or domains of wellbeing. In this survey, respondents rated ten domains on a 5-point scale from poor to excellent, suggesting how their wellbeing was doing well in each area. They were also asked to indicate the importance of each domain to their overall personal wellbeing on a 5-point scale from not at all important to very important. The top two highest rated wellbeing domains for respondents in Spanish Fork were Living Standards and Safety and Security. The two most important wellbeing domains were Safety and Security and Mental Health. 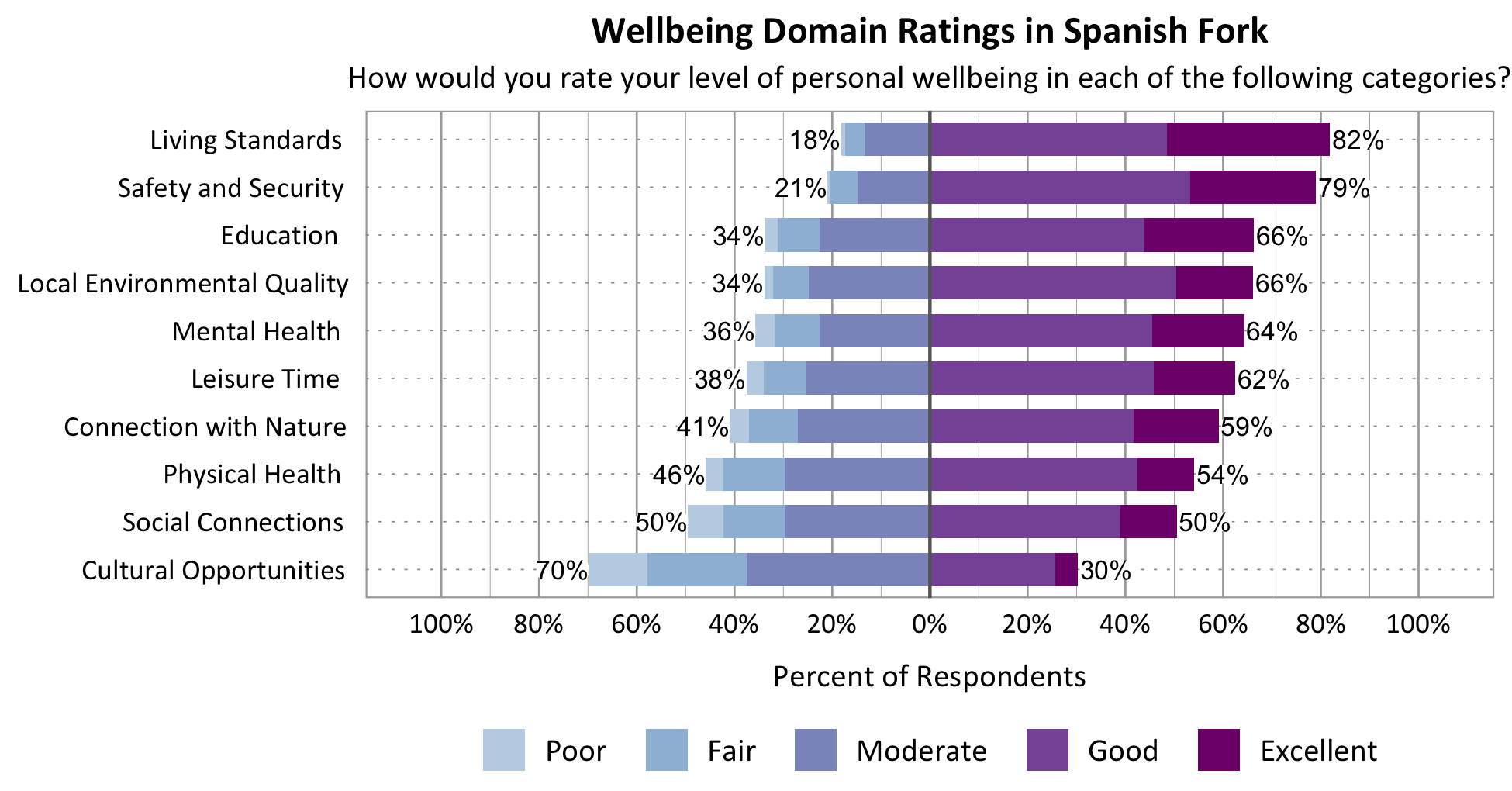 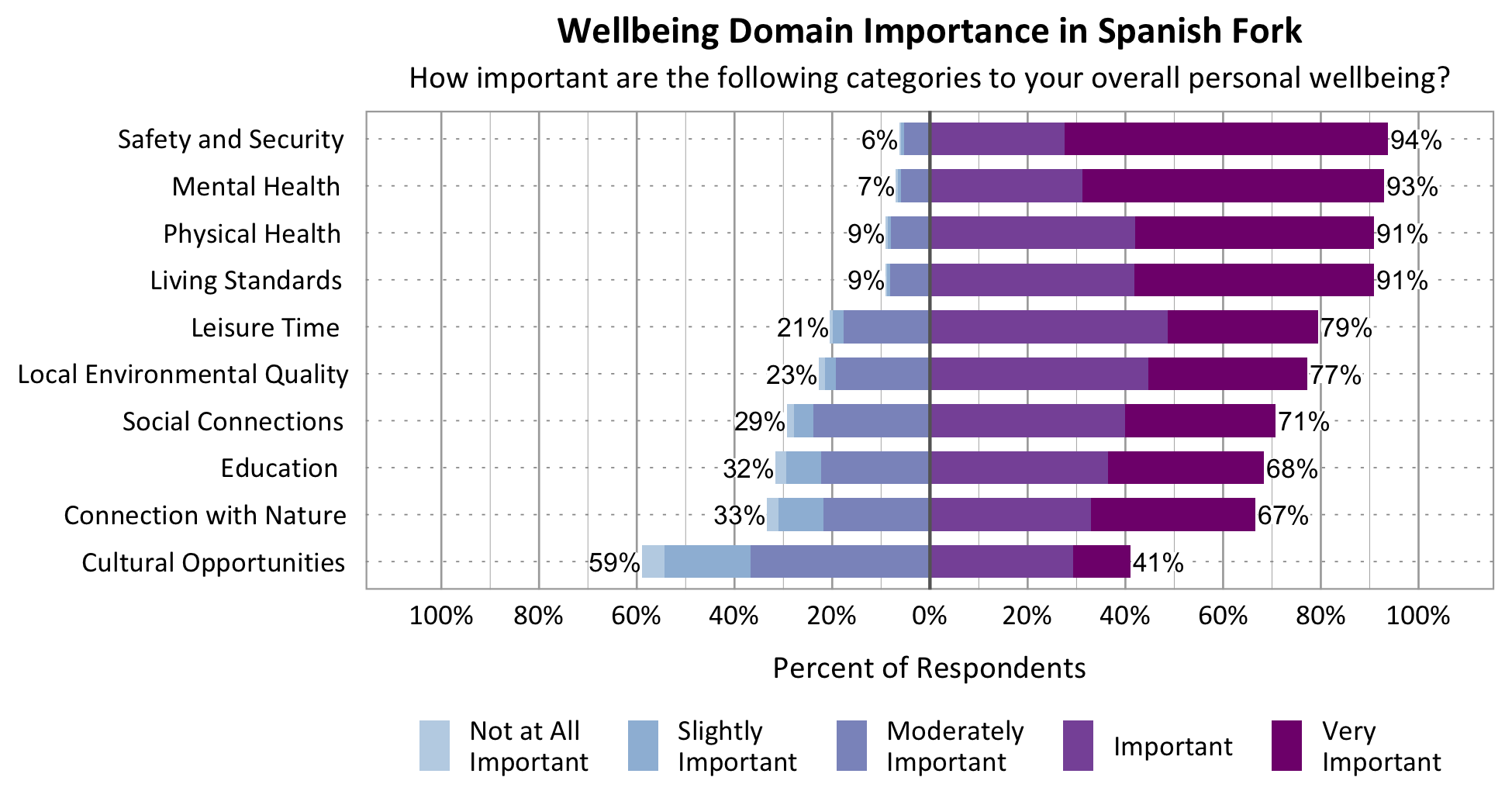 The graph below illustrates the relationship between the average rating and the average importance of wellbeing domains for survey respondents from Spanish Fork. Living Standards and Safety and Security were highly important and highly rated. Physical Health falls into the red quadrant or “Red Zone”, indicating that it was of higher-than-average importance, but rated lower than average. Mental Health approaches this quadrant as its importance was close to the overall average domain importance, but rating fell below the overall average rating. Please note that all domains except for cultural opportunities had an average rating above 3.0 (moderate) and the importance score for all domains was higher than 3.0 (moderately important). 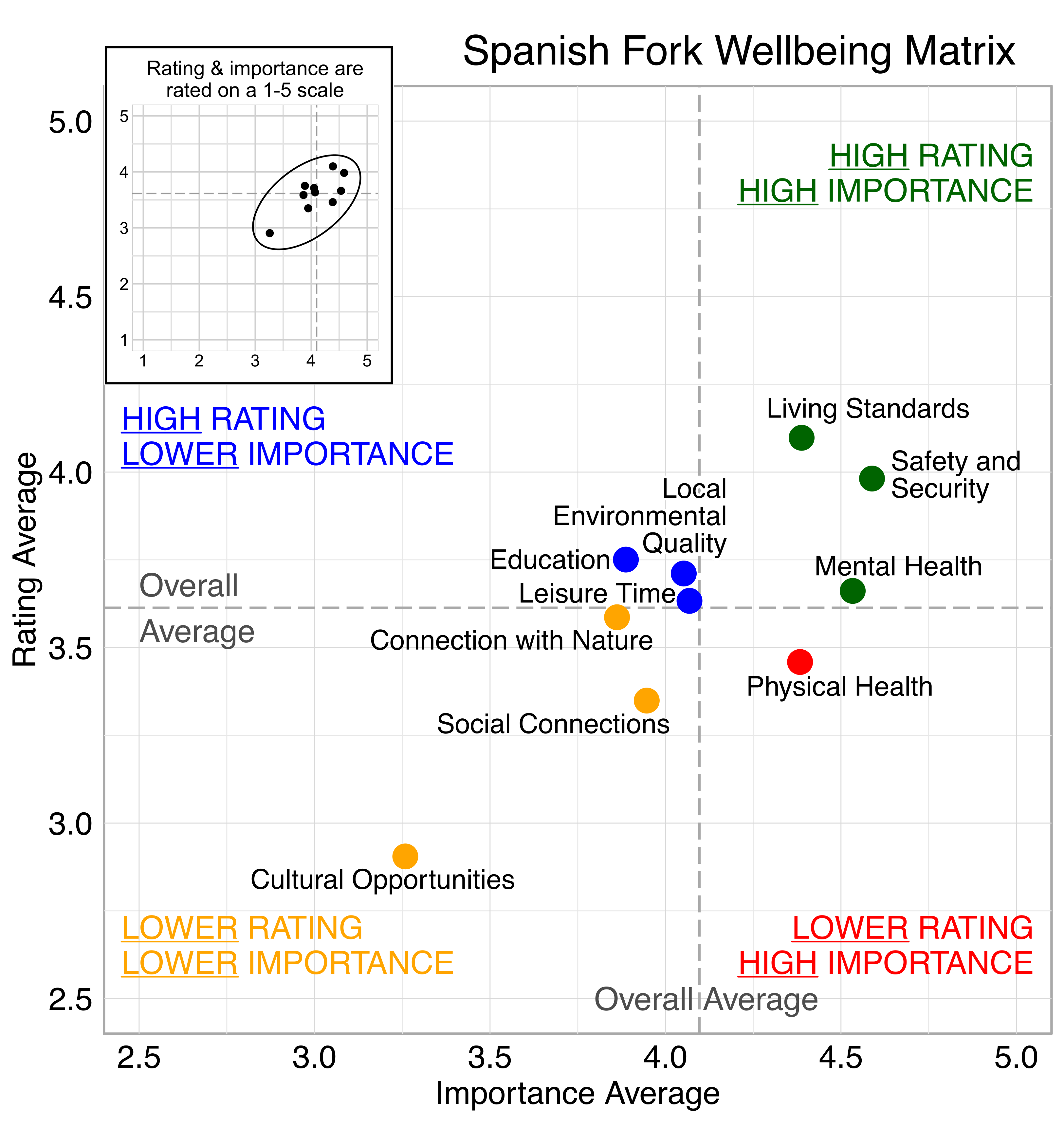 Does wellbeing vary across neighborhood areas in Spanish Fork?

Overall personal wellbeing and city wellbeing varied by respondent’s self-identified area of residence, but these differences were not statistically significant.

How did the COVID-19 Pandemic Impact Wellbeing Domains?

The COVID-19 pandemic’s impact was most strongly felt regarding Social Connections, Cultural Opportunities, and Mental Health as shown in the graph below. No change was reported by most Spanish Fork respondents for the areas of Safety and Security, Local Environmental Quality, and Living Standards. Improvements were reported by 18% of respondents for Leisure Time and Connection to Nature. 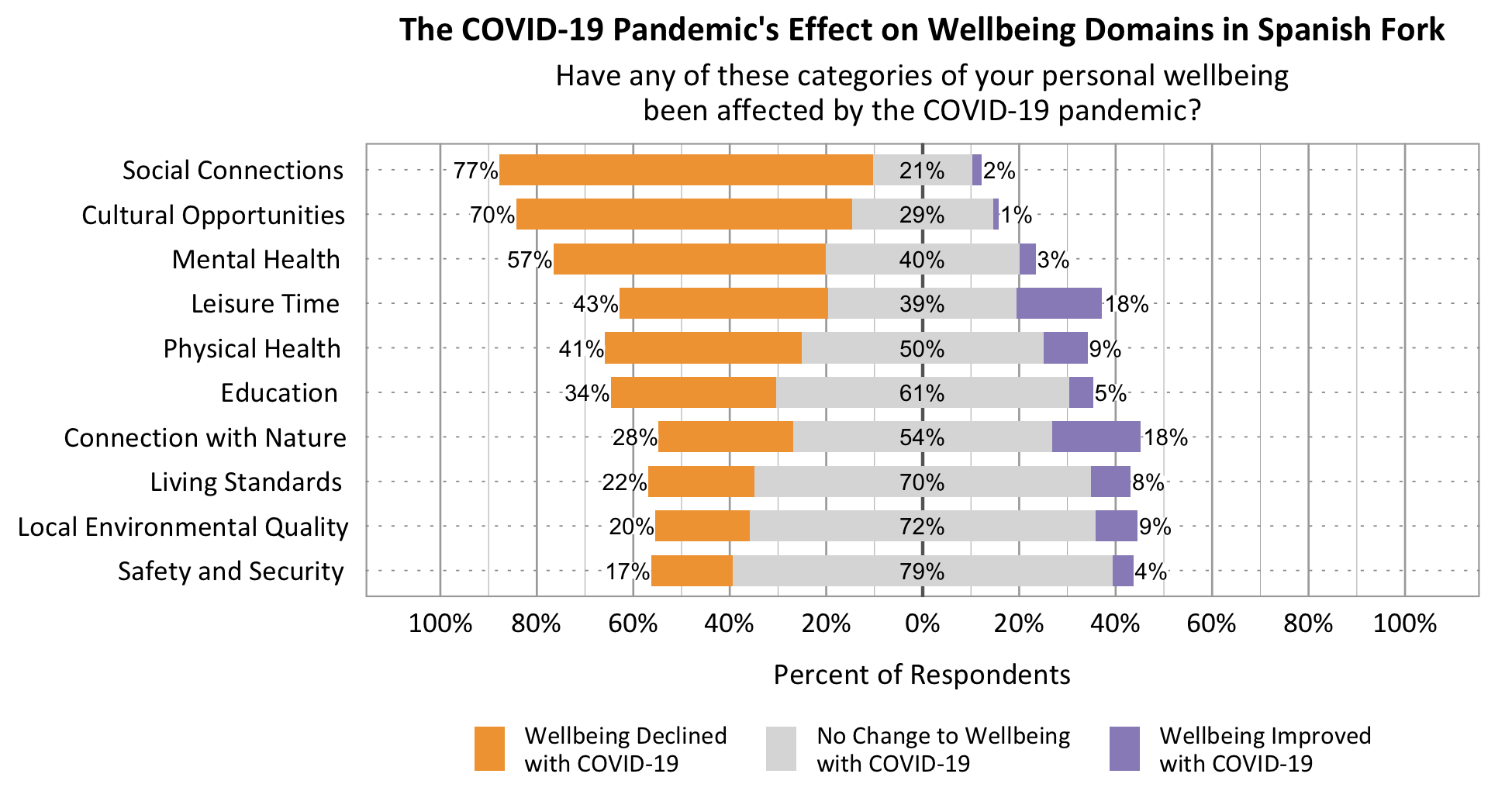 The following relationships were found in Spanish Fork between demographic variables and declines due to COVID-19 pandemic:

Community wellbeing was more likely to decline for those living in Spanish Fork longer than 5 years.

How are Demographic Characteristics Related to Wellbeing?

The demographic variables age, gender, college degree, religion, income, and length of residence were found to have varying relationships with wellbeing perspectives among Spanish Fork respondents as shown in the table below based on a multivariate generalized linear model based on unweighted data (significance based on p < 0.1). The +/- sign indicates whether the demographic group was statistically significantly higher or lower than others in that category. Colors indicate strongest relationships (p < .05).

Relationship Between Demographic Characteristics and Wellbeing Domains in Spanish Fork 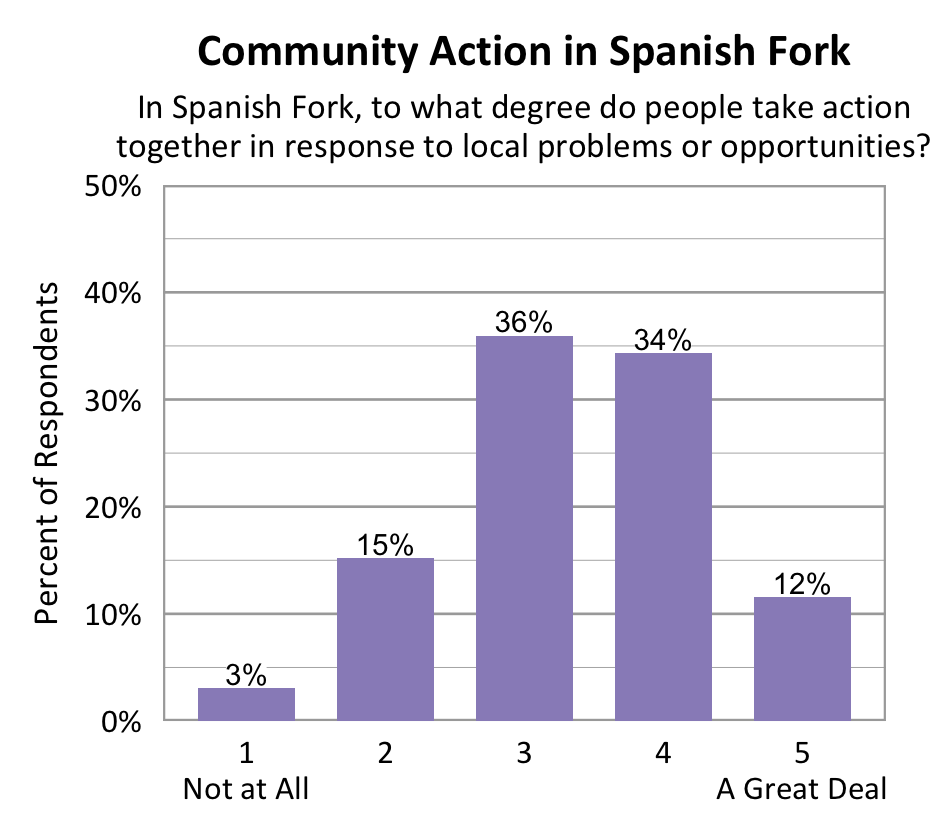 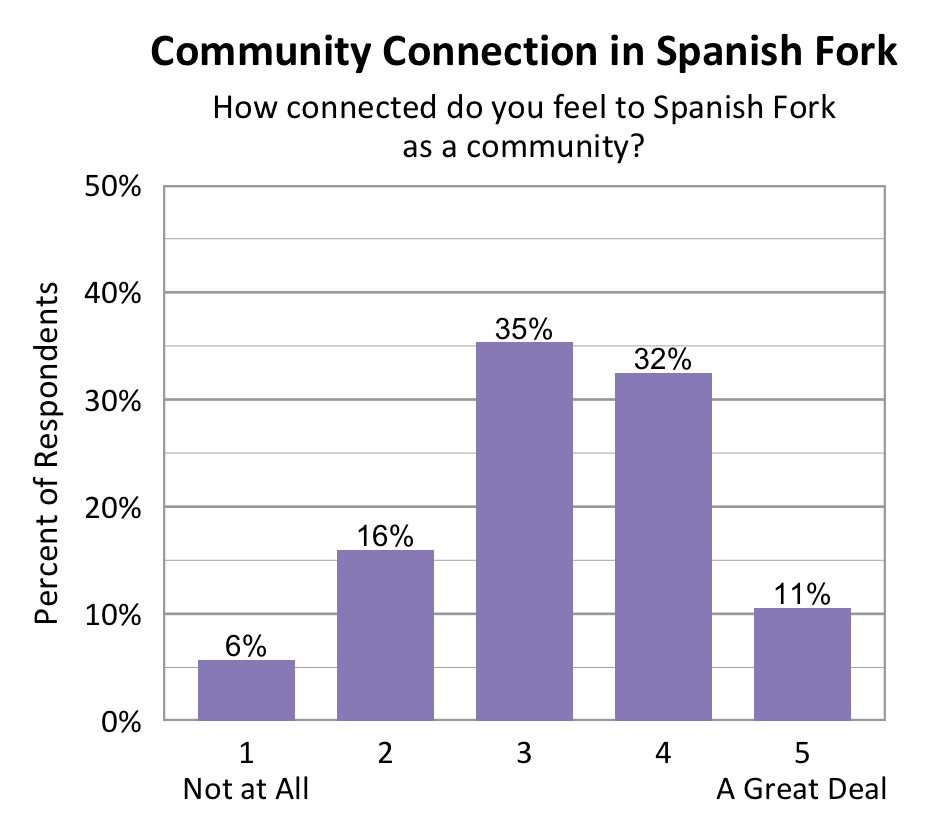 Demographic characteristics were influential regarding community connection and perceptions of local action as shown in the table below based on a multivariate generalized linear model with unweighted data (significance based on p < 0.1). Those age 60+, residents living in Spanish Fork more than 5 years, and Latter-day Saints indicated higher perceptions of local action. Latter-day Saints also indicated greater community connection. Other variables had weaker relationships with community connection. Colors indicate strongest relationships (p < .05).

The graphs below show how Wellbeing Project cities compare on the degree to which people take action in response to local problems and opportunities and how connected people feel to their city as a community. Spanish Fork is in the bottom 5 on both perceived community action and in the lower half on community connection based on the number of people indicating a 4 or 5 on a 5-point scale. 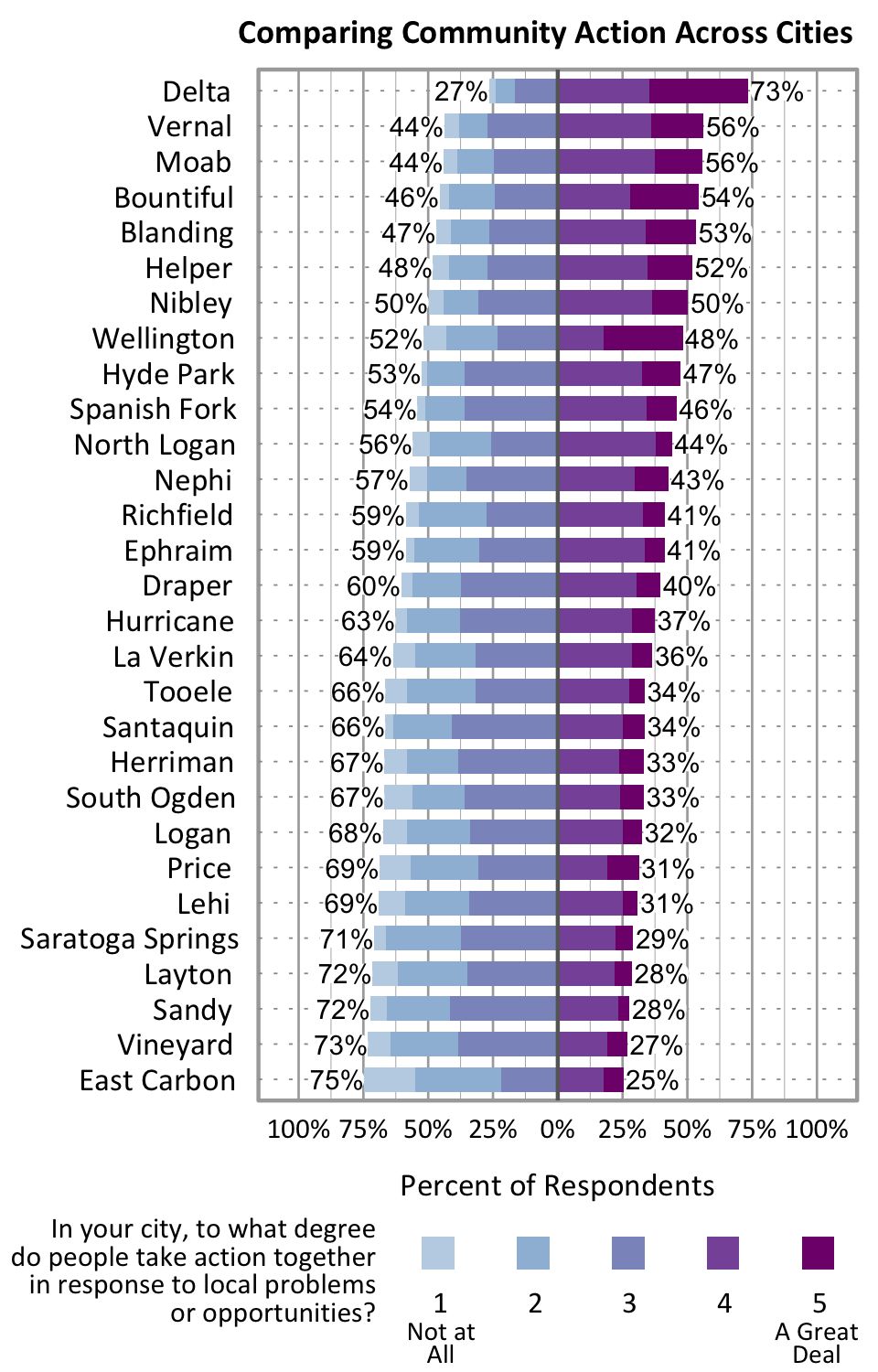 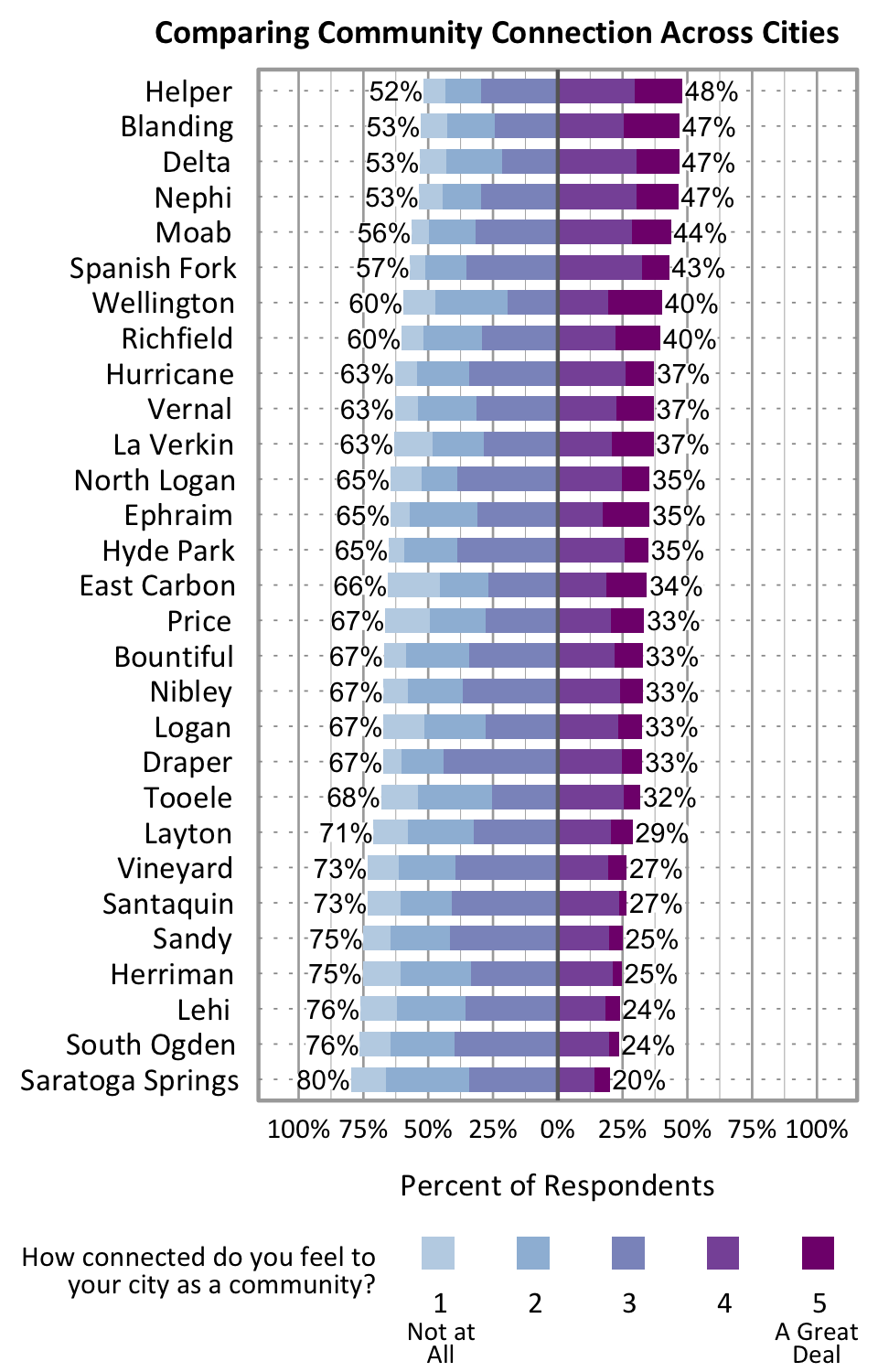 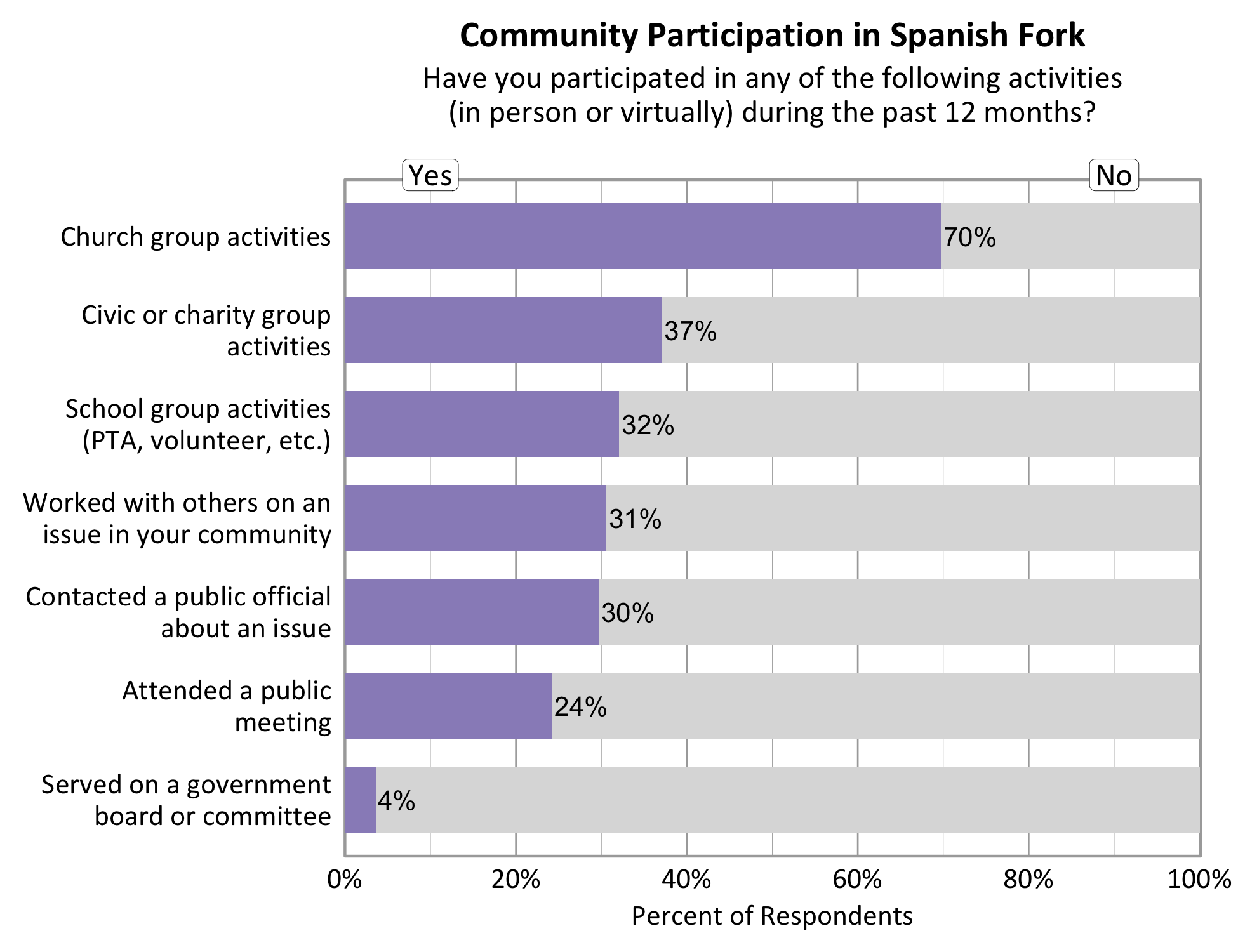 Survey participants were asked about the influence of landscape features on their wellbeing. Natural landscape including mountains, trails, rivers and streams, and city parks were found to have an overwhelmingly positive influence on wellbeing. In terms of development and industry in the landscape, respondents were more divided. 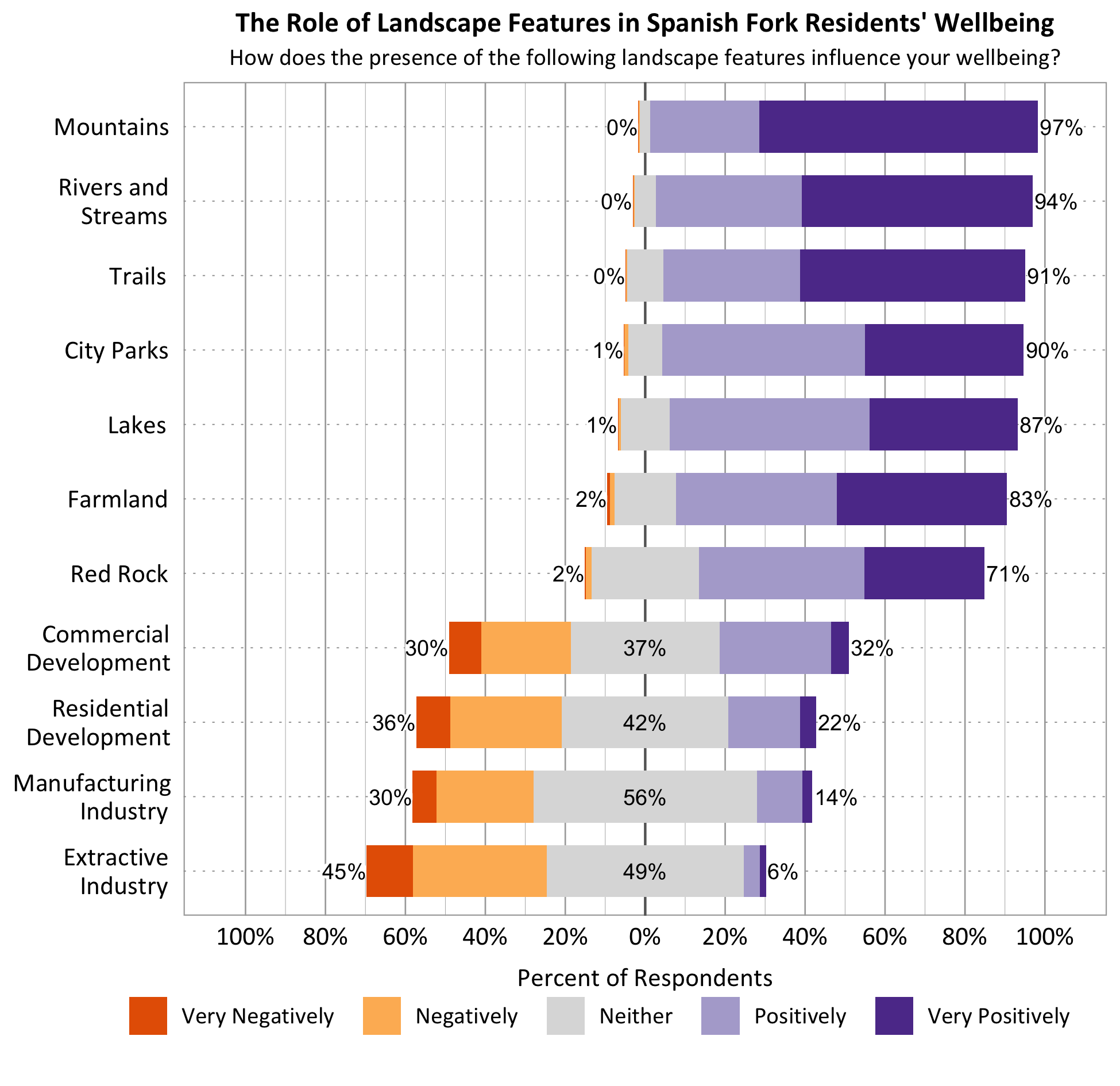 The majority of Spanish Fork survey respondents indicated they felt population growth was too fast (70%), but they were more evenly distributed on the pace of economic development, with 45% indicating just right, and 47% indicating too fast. 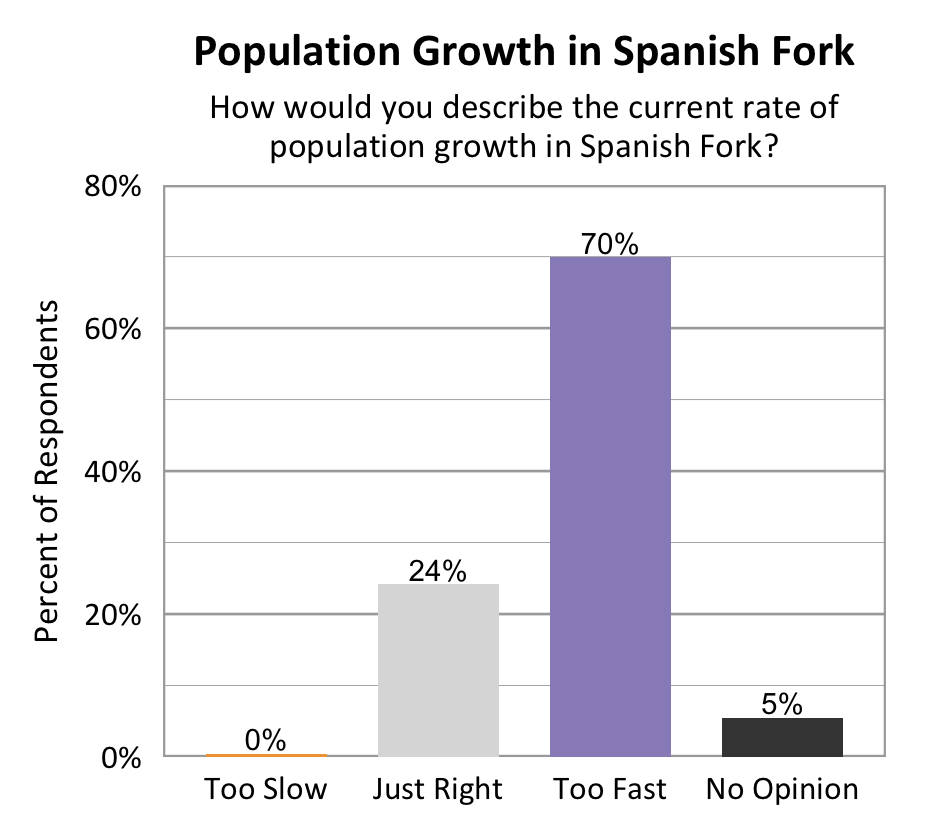 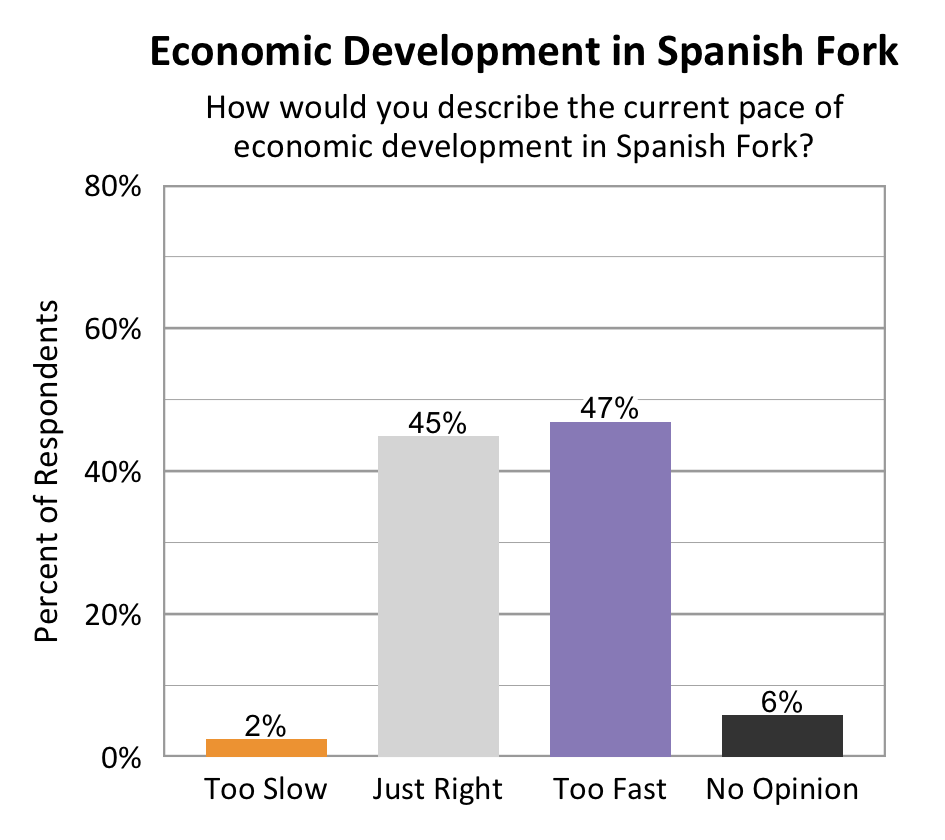 The graphs below show how Spanish Fork compares to other participating cities in the Wellbeing Project on these perceptions of population growth and economic development. 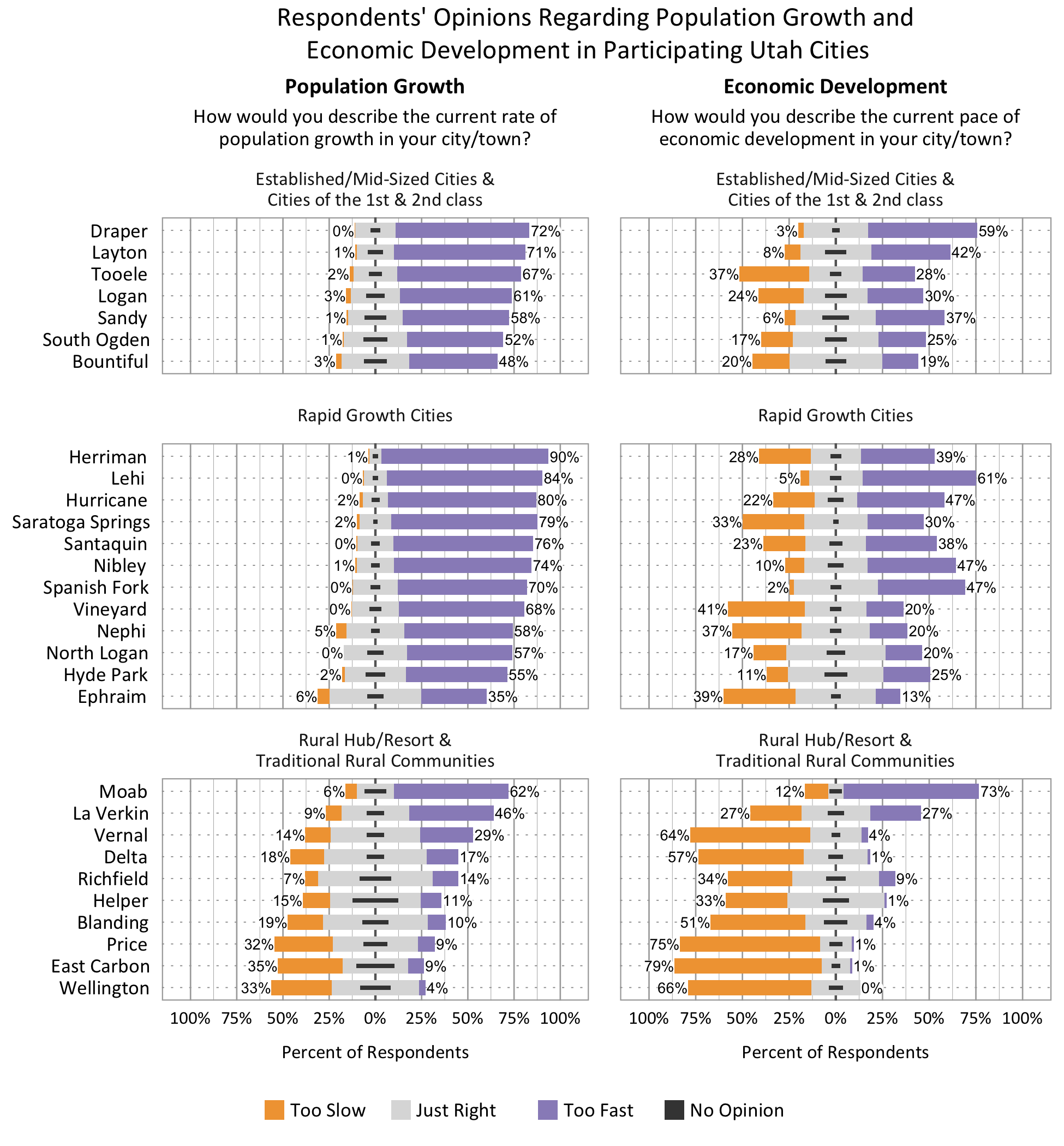 Survey respondents indicated the degree to which a number of possible local issues were a concern as they look to the future of Spanish Fork. Roads and Transportation, Affordable Housing, and Air Quality were the top three concerns with over two-thirds of respondents indicating these were moderate or major concerns. 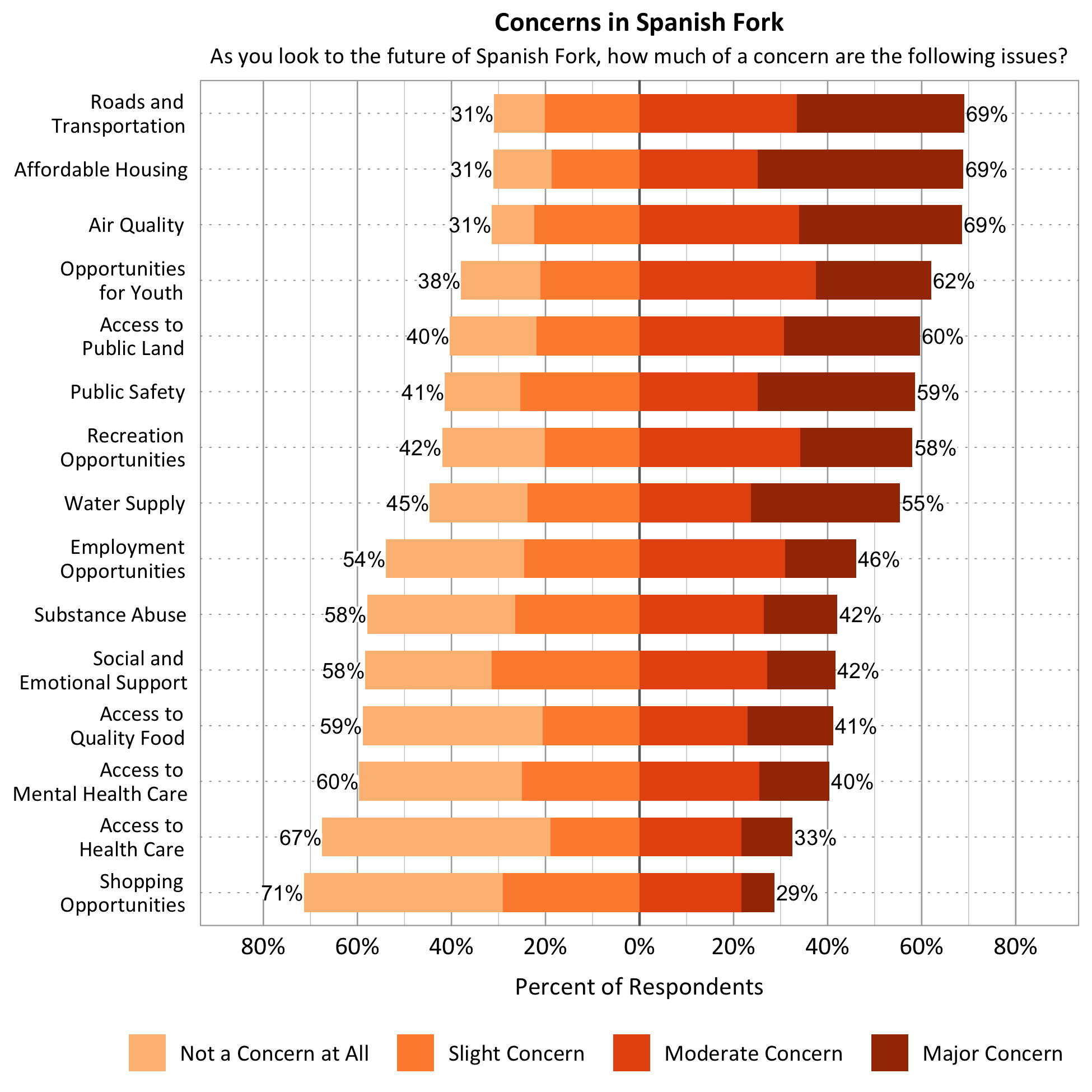 Other concerns were raised by 104 respondents who filled in the “other” category. Traffic and Too much growth were the most common additional concerns.

The survey provided opportunities for respondents to share their ideas about Spanish Fork with one question on what they value most about their city and another for any additional comments on wellbeing. A summary of values is below. Analysis is ongoing regarding all additional comments and a summary will be added to the report later in 2021. 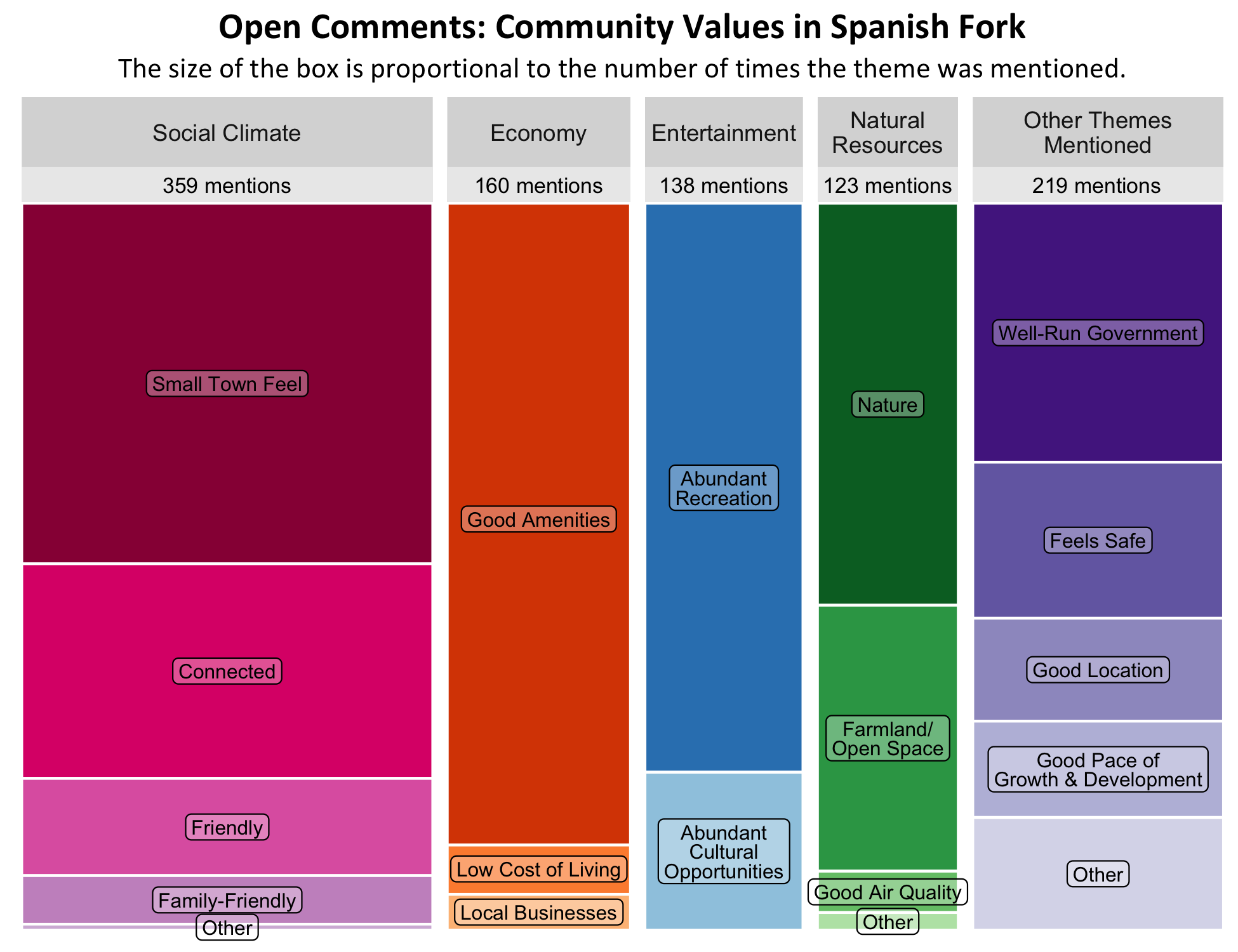 The Utah League of Cities and Towns is a collaborator on this project and the following people have contributed to this effort in many ways: Casey Trout, Rachel Sagers, Madison Fjeldsted, Jordan Hammon, and Sarah Wilson.

Utah State University is an affirmative action/equal opportunity institution and is committed to a learning and working environment free from discrimination, including harassment. For USU’s non-discrimination notice, see equity.usu.edu/non-discrimination.