USU celebrates often-unknown Aggie women—those who served as pioneers from the institution’s earliest days, to those paving the way for future generations of leaders and innovators. From the first day of classes in 1890 as the state's land-grant campus, women have been actively engaged as students, staff, and faculty. Their voices have impacted the cultural, scientific, economic, and social fabric of Utah State University for generations.

Year of the Woman recovers the voices and stories of these women from the past, lauds their legacy in the current generation, and anticipates continued success of our students, alumni, staff, and faculty. Join us in celebrating Aggie women who have been a force in the classroom, on campus, in the community, in the world, and beyond for 130 years.

A Vote and a Voice for Women 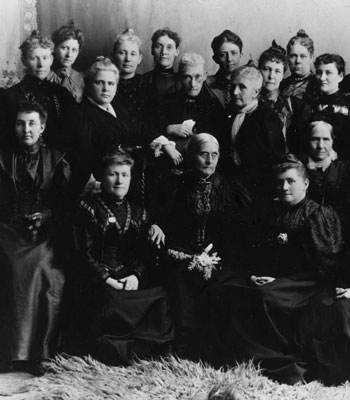 Utah women win the right to vote early, and they win it twice. 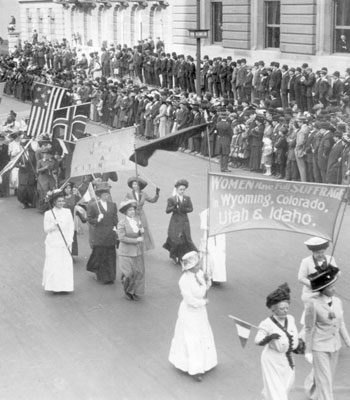 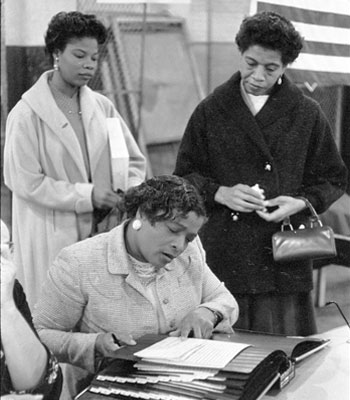 Equality for all declared in one of the most far-reaching pieces of civil rights legislation in U.S. history.

Purple, White, and Gold: The Colors that Convince

Colors play an important role in the suffrage movement. Becoming aware of the way visuals enhance their cause, suffragists adopt “purple, the color of loyalty; white, the emblem of purity; and gold, the color of light and life.” The yellow rose signifies the vote of support for the 19th Amendment and has become a lasting symbol of women’s equality.

A History of Impact

Dive into the rich history of Utah State University women and their impact on current and future generations. Check back frequently as we continually update this timeline throughout the Year of the Woman.

Utah is the first place in the United States to have a vote cast by a woman. The honor goes to Seraph Young on February 14.

One of the provisions of the Edmunds–Tucker Act in 1887 was the repeal of women's suffrage and thus the women’s vote becomes disenfranchised until Utah earns statehood in 1896.

At the Dedication Ceremony of the UAC, Sarah Walker Eddy delivers a rousing speech on “Higher Education and Women.” The Governor offers her a faculty position on the spot.

The act funded an Agriculture Experiment Station with a small appropriation granted for a farmer’s institute in each county on an annual basis. This plants the seed for what eventually becomes the Extension division charged with “carrying the college to the people.”

A suffrage parade held in Washington, D.C., the day before the inauguration of President Woodrow Wilson in 1913 received national attention when spectators in the largely male crowd attacked the marchers. Although more than 100 women had to be hospitalized for injuries, the women refused to give up and completed the march. Historians credit the 1913 parade for inspiring a new wave of interest in the Women's Suffrage Movement, especially among a new generation of activists.

UAC grants its first graduate degree, a master’s in agriculture. Research at the university focuses mostly on agriculture in the beginning years and some of the first experiments are conducted by the Utah Agricultural Experiment Station.

During the "Night of Terror," 33 suffragists from the National Women's Party are arrested for protesting outside of the White House and are brutally beaten and tortured at the Occoquan Workhouse, a prison in northern Virginia. Their stories horrify the nation, galvanizing public support for the Women's Suffrage Movement and bringing new momentum, which helped pass the 19th Amendment, recognizing women's right to vote, three years later.

The Utah State Legislature votes to ratify the 19th Amendment, consistent with its long history of supporting women's voting rights.

The 19th Amendment to the Constitution is finally ratified, enfranchising all American women and declaring for the first time that they, like men, deserve all the rights and responsibilities of citizenship.

This act, "to enforce the 15th Amendment to the Constitution," signed into law by President Lyndon B. Johnson, outlaws the discriminatory voting practices adopted in many Southern states after the Civil War, including literacy tests as a prerequisite to voting.

Subscribe to Utah State Today for Year of the Woman updates