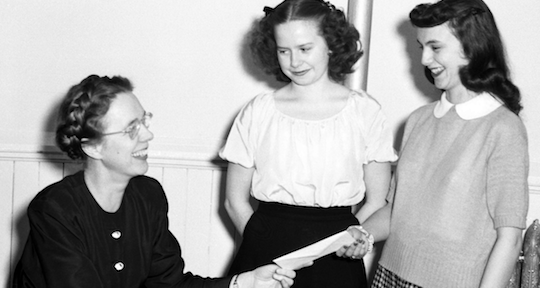 Utah State University's Bennion Teachers' Workshop was established in 1993 through the generous gift of Ione S. Bennion. She expressely aimed for the workshop to perpetuate democratic principles, namely “to explore the concepts upon which democracy is built, the conditions under which it flourishes, and the dangers to its existence…. The seminar participants are encouraged to explore new themes in their teaching and writing with democratic principles in mind.”

A native of Salt Lake City, Ione Spencer Bennion moved to Logan when her first husband, Wayne Bennion, began teaching at what was then known as the Utah State Agricultural College (USAC).  After her husband’s untimely death in 1942, she returned to Salt Lake City to complete a BA degree in English. She was at work on a Master’s degree when USAC’s President Franklin Harris called to offer her a position as the college’s first Dean of Women. She served in that capacity until 1952 when she had to resign due to an anti-nepotism law from the 1930s that was resurrected after she married her second husband Ted Daniel, a USAC professor of forestry. But this kind of adversity never daunted her. She spent the next 28 years in the Logan school district, homeschooling the sick and disabled.

Committed to community betterment, especially in regards to issues of social justice, Bennion was recognized as the Governor’s “Outstanding Volunteer” in 1979 for her tireless work with numerous organizations, including the Alliance for the Varied Arts, Foreign Students Committee, the Cache United Way Board, and the Nora Eccles Harrison Museum. During the Eisenhower Administration, she began work on the Utah Committee on Civil Rights, contributing to the national adoption of the Voting Rights Act of 1965. She also devoted much of her energy to women’s causes, including the Faculty Women’s League at USU, the Women’s Legislative Council, and the League of Women Voters. During the 1960s, Bennion was instrumental in starting a program allowing pregnant teenagers to finish high school. Later she served on the board of Planned Parenthood. She was also an ardent supporter of the passage of the Equal Rights Amendment and always hoped it would be passed during her lifetime. Another bequest from Ms. Bennion helped establish USU’s Women’s Center, which still exists today. Ione Bennion always went to great lengths to address any need she saw. Iranian and East Indian students often lived rent-free in her home while attending USU, and she was known for personally paying many disadvantaged students' college tuition. According to a 1979 news story, “Kindness and action against injustices… [were] just an integral part of the fabric of her life.”