Utah's license plates tout one of Utah's most attractive features, 'the greatest snow on Earth,' but the cold temperatures that come with the snow can cause ugly pollution.

Utah State University scientist Phil Silva is studying what conditions in Utah's atmosphere make inversions in the state particularly severe and what people can do to correct the problem.

Many researchers around the world are studying the negative effects of pollution and the impact it can have on one's health. Silva, however, is focusing more closely on the chemistry of pollution.

Silva said that when it comes to pollution, things are not always what they seem. When Silva first came to Utah, he thought fireplace smoke would be a big contributor to the state's pollution levels. After researching air quality at locations throughout northern Utah, he discovered that ammonium nitrate causes 50 to 70 percent of the pollution in the state.

Ammonium is a product that comes from agricultural sources, such as dairy and livestock farms, which are prevalent in many northern Utah communities. Nitrate is produced by many industrial processes, as well as vehicle emissions. Burning fossil fuels, such as gasoline, in power plants and vehicles results in the production of nitric acid and ammonia as air pollution, said Silva.

"Utah is vulnerable to ammonium nitrate pollution because it is traditionally an agricultural area that is rapidly becoming more urban," he said.

So where does the other 30 percent of pollution in Utah come from? Silva said it comes from organic carbon, which comes from several sources, including diesel vehicle emissions, fireplace smoke and barbeque grilling. Manufacturers are trying to create more environmentally friendly options, including reducing sulfur emissions on newer model diesel engine vehicles.

Consumers who use natural gas fireplaces and barbeques are helping, said Silva because natural gas emits lower particle emissions. When it comes to propane versus briquette barbequing, propane is the cleaner way to go, he said.

Utah's chemical pollution signature is unique said Silva, and he has begun to research how organic carbon fits into the larger picture.

"The larger picture is what we have to keep in mind," said Silva. "Ultimately, any research being done to correct the causes of pollution will have an effect on the future of the world."

Silva's studies are already being used by Utah policy makers to begin developing plans to lessen the negative effects of pollution. He serves on air quality boards for Cache Valley's Bear River Health Department and the State of Utah's Division of Air Quality. These boards deal directly with Utah's susceptibility to pollution-trapping inversions.

Temperature inversions happen when cold air is trapped below a mass of warmer air. During a temperature inversion, air pollution released into the atmosphere's lowest layer is trapped. Utah is vulnerable to inversions during the winter months because of the blanket of snow that is so popular with locals and tourists. Snow on the valley floors lowers the temperature, which can exacerbate the problem.

Inversions are a nationwide problem that not only affects Utah, but also certain areas of California and the eastern United States. During severe inversions, trapped air pollutants form a brownish haze that can cause respiratory-related illness, particularly in the young and old.

"Northern Utah is a great place to live nine or 10 months of the year," said Silva. "But in January and February, we often get hit with a high amount of inversion days that are not only depressing to look at, but that are also bad for our health."

By focusing on the chemistry of pollution, Silva's research has the potential of providing an important link in efforts to reduce global pollution.

Once a good policy to lessen the impact of pollution is in place, the next step will be to provide information to the public so that everyone can do their part lower pollution, said Silva. 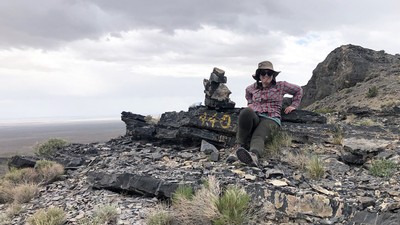