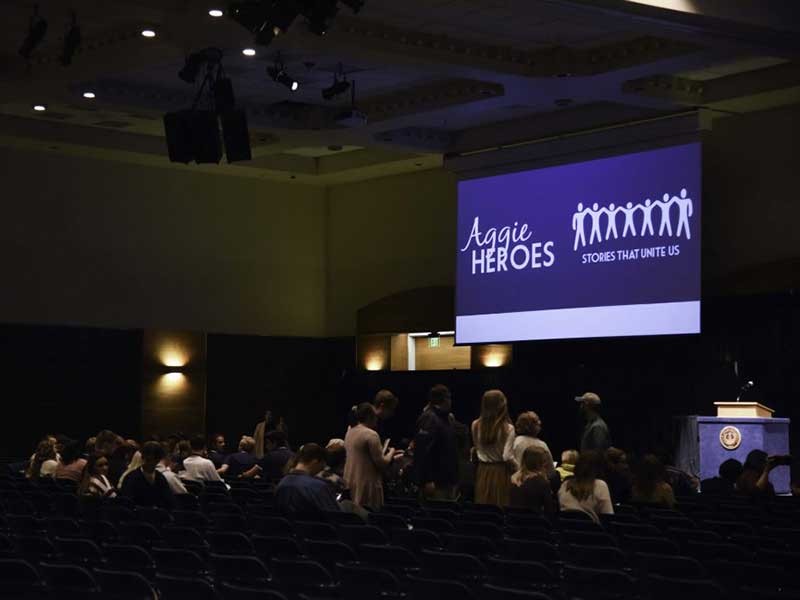 The theme for this year’s presentation was “Stories that Unite Us.”

Messages at this year’s event included emotional stories from the panelists, all of whom have survived either car accidents, drug addiction, eating disorders and/or sexual assault. They were all able to return to school despite their experiences, or in some cases, because of them.
One such speaker, Sami Ahmed, is a junior studying finance and chemistry. He credits his success to his mother and a mentor of his, Brent Clark.

His mother came to the United States from Ethiopia in 2004 when Sami was nine years old. Two years later, he joined her in America.

“She gave me this great desire to be someone,” Ahmed said during his speech.

In 2006, Ahmed joined the Big Brother Big Sister program where he met Brent Clark who, Ahmed said, is the reason he was able to attend school.

Ahmed hopes to be remembered as “an optimistic man who helped others” and hopes to accomplish these goals by pursuing medical school.

Other panelists included Koralene Tapoof, who spoke on returning to school after the death of her father.

There was Claire Harrison, who talked about her experiences battling anorexia and with sexual assault.

Her story, Harrison said, was “not unique” and many individuals are fighting with their histories of assault or eating disorders. Harrison has a history of both.

“This happens to people every day. In ways they don’t even know how to describe,” Harrison said.

Another speaker, Kennedy Murdock, a mathematics major, survived a car accident in 2012. She is grateful for Utah State and says that her university experience has strengthened her self-esteem.

Murdock regarded her recovery as a “miracle,” and urged students in attendance at Aggie Heroes to not take anything for granted.

“In math equations, things don’t change. In life equations, they do,” Murdock said.
Benson Ambrose is a 43-year-old Navajo and was the final speaker during Aggie Heroes.
Ambrose is a senior at USU studying agriculture education. He is a married father of two boys.
Ambrose started his speech by speaking his native language, Navajo. This was done as a way for Ambrose to “say my plans in my native language to honor my past and my ancestors.”

Ambrose started with a story about his mother who always hoped he would attend a university. As Ambrose got older, the college dream his mother had for him seemed farther away than ever. This was only made worse by a car accident. Ambrose had to be revived twice and was left with the inability to move the left side of his body for a time.

It was his family, his wife and new son, who inspired him to make a change and fulfill his mother’s wishes of him going to school and getting a degree — 25 years later.

“I looked at my son and told him ‘You’re not going to grow up the way I did. You’re going to be grateful for what you have,’” Ambrose said.

He called quitting oxycodone “the worst time of my life,” but was able to do it with the love and support of his family. Including his Utah State family.

Ambrose ended his speech with a challenge. He challenged the Aggie community to reconnect with themselves and with each other.

“Let us rise as a nation — as an Aggie nation, and let us all shine as an individual because we all have something to offer,” Ambrose said.

Aggie Heroes is in its second year. For more information about the program or for an archive of last year’s speeches, please visit thinkcareact.usu.edu/aggieheros/heros2017.