Utah State University may seem a long way from world capitals like Washington, D.C., but over the years, it’s proven itself a reliable way to get there.
A rural Nevada boy named Harry Reid liked what he saw at USU, and used his political science and history double major to vault him into a successful career in the United States Senate. Now he’s the Senate Majority Leader, occupying arguably the most influential seat in the entire legislative branch. And he’s not the only one. Students from a wide variety of departments and majors — not just political science — leave USU’s campus equipped for leadership in the world ahead.
The university’s political internship program plays a pivotal role in that success. The program places an astounding 50 to 60 students in various positions each year, including about 35 in Washington. In addition to class credit, student interns receive actual policy experience. In our nation’s capital, they work alongside high-profile decision-makers. On the local level, they perform vital tasks and swiftly ascend the ladder. Aggies stand out in work for elected officials, think tanks, and non-profit organizations alike. In each capacity, they establish valuable contacts, giving them the leg up on future career opportunities. It’s no surprise then, that USU political interns lead all Utah schools in actual job placement. Capitol Hill isn’t so far away after all.
Alumni spotlight: Harry Reid ‘61
U.S. Senate Majority Leader 2006-Present, U.S. Senator (D-NV) 1986-present
REID’S PATH TO THE SENATE
USU Political Legacy
Related link:
USU Department of Political Science
USU College of Humanities, Arts and Social Sciences
Writer: Jeff Carr, 435-797-1355, jeff.carr@usu.edu 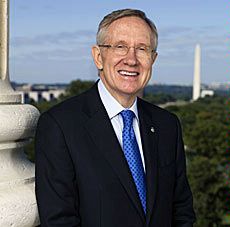 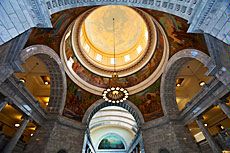 The beautiful Utah State Capitol in Salt Lake City is a second home to many current and former Aggies.