Former Utah State [University] football great Earl Lindley passed away at the age of 79 on Monday [Feb, 13, 2012] in his hometown of Smithfield, Utah. Lindley was inducted into the Utah State Athletics Hall of Fame in 2010.

An athletic player, Lindley was a two-sport standout at Utah State in the early 1950s in football and basketball. On the gridiron, Lindley excelled as a halfback and defensive end and led the nation in scoring as a senior in 1953 with 81 points as he scored 13 touchdowns and added three extra points.

During his Utah State career, he was teammates with Aggie legends Dave Kragthorpe and LaVell Edwards.

Along with his football success, Lindley was also a two-year letterwinner on USU's basketball team in 1952 and 1953.

Following his collegiate career, Lindley was selected by the Chicago Bears in the 16th round of the 1954 NFL Draft but played in the Canadian Football League for the Edmonton Eskimos from 1954-57, helping the team win three-straight Grey Cup Championships (1954-56).

Lindley, who was voted into the Utah Sports Hall of Fame in 1986, had his football career cut short by a severe shoulder injury. 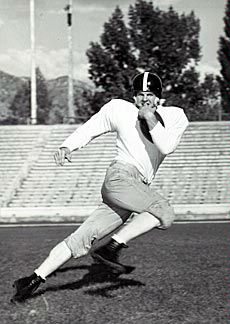