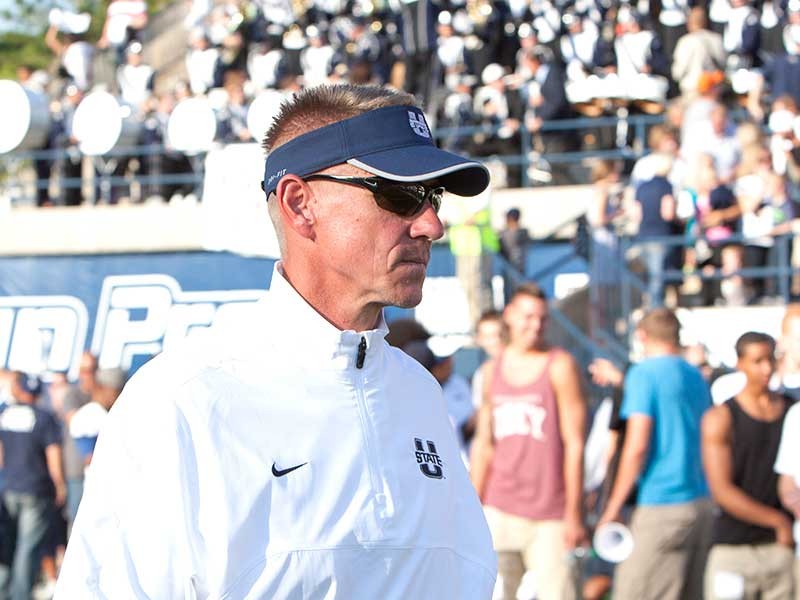 Utah State University Vice President and Director of Athletics John Hartwell announced Sunday that Gary Andersen is returning to be the Aggies' head football coach. Andersen, who was also USU's head coach for four seasons from 2009-12 and named the Western Athletic Conference Coach of the Year in 2012, will be the first of 27 coaches in school history to serve in that capacity multiple times.

A press conference to formally introduce Andersen will be held on the third floor of the West Stadium Center at Maverik Stadium, on Tuesday, Dec. 11, at 11 a.m. The event is open to the public and free parking will be available in the lot west of the stadium. The press conference will also be streamed live online at UtahStateAggies.com/watch.

"We welcome Gary and Stacey and their family back to the Utah State family," said Hartwell. "His care-factor for his players, coupled with his recruiting philosophy and plan to win, are keys to the continued success of Aggie football. His knowledge of the state of Utah and our program are unparalleled and we feel those attributes will greatly aid in the continued growth and success of Aggie football."

In all, Andersen has been a Division I head coach for 10 years and brings 30 years of coaching experience with him back to Utah State. He has been involved in 12 bowl games, including four New Year's Day bowls.

"Stacey and I are thrilled to be back at Utah State University," said Andersen. "This is a special place and we are excited to meet these young men and play a part in seeing them succeed off and on the field academically, socially and athletically. We are grateful to reconnect with many great friends and supporters in Logan and want to thank John Hartwell and President (Noelle) Cockett for the opportunity. Go Aggies!"

"We want to welcome Gary and his family back to Utah State University," said Cockett. "Gary clearly knows football and the blueprint for success at Utah State. He is dedicated to the success of his student-athletes in the classroom, on the field of play and in life after football. Gary's energy and enthusiasm will benefit the football program, athletics department and University, and as importantly, the Aggie fanbase across Cache Valley and beyond."

Academically, three of Andersen's teams finished in the top 10 nationally in Academic Progress Rate, in addition to 160 academic all-conference honorees.

When initially hired on Dec. 4, 2008, Andersen inherited a football program that had suffered through 11-straight losing seasons and only had two winning campaigns in 28 years. Fast forward six years since his departure, and Andersen is inheriting a program that has now appeared in seven bowl games in the past eight years after playing in just four bowl games prior to his arrival.

In just his third year at Utah State, Andersen led the 2011 squad to its first bowl game in 14 years and the first Aggie team to win seven games since 1993. The following season, Andersen led USU to its best season ever with a school-record 11 wins, going undefeated in the WAC and capturing its first outright league title since 1936. USU also won just its second-ever bowl game that season with a 41-15 victory against Toledo in the Famous Idaho Potato Bowl. USU finished the 2012 campaign with an 11-2 record and is one of just two teams in school history, along with the 1961 club, to finish the season nationally ranked as it was 16th in the final Associated Press poll, 17th in the final Coaches poll and 23rd in the final BCS standings.

During his final two seasons at Utah State, Andersen led the Aggies to an 18-8 record, including an 11-2 conference mark.

While at Utah State, Andersen coached six All-Americans (Will Davis, Kerwynn Williams, Tyler Larsen, Nevin Lawson, Zach Vigil and Kyler Fackrell) and 10 Aggies who went on to have careers in the NFL, including current Seattle Seahawks linebacker Bobby Wagner, who was selected in the second round of the 2012 NFL Draft. Furthermore, Andersen coached 27 players that earned various all-conference honors during his time in Logan, including running back Robert Turbin, who was named the WAC's Offensive Player of the Year in 2011 and has spent the past seven seasons in the NFL.

Andersen comes back to Utah State after spending the 2018 season as the associate head coach and defensive line coach at the University of Utah, where the Utes posted a 9-4 record and advanced to the Pac-12 Championship game after winning the Pac-12 South. At Utah this year, Andersen helped coach 10 defensive starters to all-conference honors, including all three of his starters on the defensive line.

In all, Andersen spent 12 years on staff at Utah during three different stints, including helping the Utes to undefeated seasons in 2004 and 2008 as they played in the Fiesta Bowl and Sugar Bowl, respectively. During his time at Utah, Andersen coached two All-Americans, two conference defensive Most Valuable Players, 22 first-team all-conference honorees and 16 NFL draft picks.

During his two years at Wisconsin, Andersen coached five All-Americans and had seven players selected in the NFL Draft. In 2013, Chris Borland was named a first-team All-American, and the Big Ten Conference Linebacker and Defensive Player of the Year. In 2014, Andersen coached Melvin Gordon, the nation's leading rusher and scorer in 2014, to the Big Ten Conference Offensive Player of the Year Award and a runner-up finish for the Heisman Trophy.

And at Oregon State, Andersen had three players drafted into the NFL in Isaac Seumalo, Sean Harlow and Treston Decoud and coached two Freshman All-Americans in Xavier Crawford and Gus Lavaka and 12 all-league player.

A 1986 graduate of Utah, Andersen earned his bachelor's degree in political science. He played center for Utah from 1985-86 after garnering first-team juco All-America honors in 1984 at Ricks College.
Andersen is married to the former Stacey Lambert, and they have three grown children: Keegan (Jen) and twins Chasen (Marquelle) and Hagen (Kaitlin), and one grandson (Raylen).

Coach of the Year Honors (6)

What Former Players Are Saying About Gary Andersen

"I am excited to see him back at Utah State. He is a great coach that knows how to get the best out of people. He helped me get to where I'm at today. I can't wait to come back and see him."

"This is a perfect hire for Utah State. I really don't think, unless you hire somebody that was already on staff, you go anywhere else to look for a head coach. He was the catalyst of turning the program around in the first place. He started it all. He not only rebuilt the team, but the entire system. He gets to come back and finish what he started. I am excited for him to be our head coach again."

"I am excited for Gary and his family. He gets to pick up where he left off. He is the one that got the program turned around. It is good for recruiting, especially with the in-state kids. It is exciting that he gets to come back and take the program to even greater heights."

"Coach A played a major role in bringing the program back to prominence. He's a huge reason for the path the program is on. To see him come back to the program is huge. He is straight-forward as a coach, and as a player, I always knew what was expected out of me."

"I love Coach Andersen. I loved everything about playing for him. We had one season together and it enriched my life. I'd do anything for him, and I trust he'd do the same for me."

"There is nothing better than a coach who puts the player and team before himself, and that's a perfect way to explain Coach A. I'm excited he gets to come back and lead a great group of young men to become great football players, but even better men. I am excited for their future and congratulations to coach."

"Coach Andersen is one of the best coaches and men I've ever met. Everything he does is about the players and helping them succeed on and off the field."