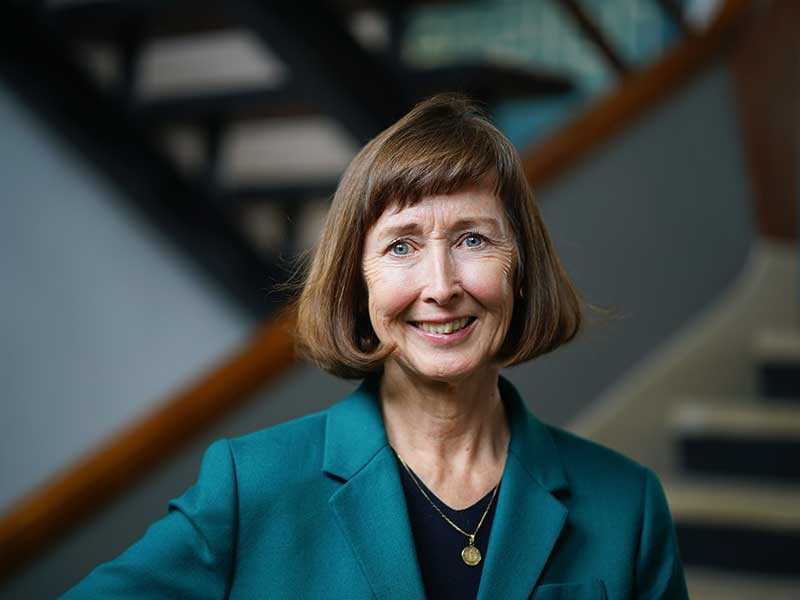 Joyce Kinkead is the 2018 recipient of the D. Wynne Thorne Career Research Award at USU.

Utah State University’s Office of Research and Graduate Studies announced Joyce Kinkead as the 2018 recipient of the D. Wynne Thorne Career Research Award, USU’s highest research honor. Kinkead, an English professor, has been at USU for 35 years. Her publications focus on Writing Studies and Undergraduate Research. She will receive this prestigious award on April 6 at USU’s Research Awards Gala.

“It is such an honor to name Joyce as this year’s awardee,” said Noelle Cockett, president of Utah State University. “Her impact on undergraduate research at USU—and nationally—is unmatched. She has worked for years to promote others’ research as well as her own; there is no one more deserving.”

Kinkead is the third English department faculty member to receive this award since it was created in 1979; she is preceded by Christine Hult in 2004 and Barre Toelken in 1997.

Kinkead received her master’s in English from the University of Central Missouri and her doctorate from Texas A&M, with emphases in composition and rhetoric, and American literature. Before coming to Utah State in 1982, she was an assistant professor of English at Pittsburg State University in Kansas. At USU, she took on the role of director of the Writing Center and then director of the Writing Program. Since then, she has served extensively at the university, as creator and director of the Writing Fellows program, associate dean for the College of Humanities and Social Sciences, vice provost, and associate vice president for research, among other roles.

In addition to her work at Utah State, Kinkead’s career has taken her around the world. She is a two-time Fulbright Scholar, conducting research in both Cyprus and Sweden. Her work has also taken her to South Korea, where she was a visiting professor of English at Keimyung University in 1999.

“Joyce is known nationally and internationally as a scholar of ‘firsts,’” wrote Jeannie Thomas, department head and professor of English and folklore, in her nomination letter. “Hers is the most spectacular career that I’ve seen in my time at three large state institutions.”

Kinkead led the USU undergraduate research program for 11 years as the associate vice president for research, from 2000 to 2011. During her time, she brought about many advances in the program, including Research on Capitol Hill, an annual event where Utah State and University of Utah students present their research to Utah policymakers; as well as the Undergraduate Research Fellows program, which provides scholarship funding and opportunities for students to engage in research from their first day on campus. She also established the Utah Conference on Undergraduate Research (UCUR). Kinkead has helped increase the number of students participating in undergraduate research, as well as increased the number of those students winning awards for their research.

Along with her passion for student research, Kinkead has dedicated her time to further her own research in the field, with focuses in writing studies and undergraduate research.
“When it comes to research, [Joyce] is a dynamo, as her publication numbers attest,” Thomas said.

With 13 books, 15 book chapters and numerous articles, her publication count is “the highest in the Department of English, and, in fact, according to a report from USU’s institutional research office, no other faculty member has as many individual book titles,” said Thomas. Much of her work is at the forefront of her fields, notably her book Researching Writing, which was the first book on research methods for writing studies for undergraduates.

Kinkead was at the forefront of the writing center movement in the 1980s. She helped organize the National Writing Centers Association and served as editor of The Writing Center Journal.

Over her 35 years at USU, Kinkead has received multiple fellowships and awards. Earlier this year, she was named a Distinguished Professor by the College of Humanities and Social Sciences. In 2013, she was designated as the Researcher of the Year by the College of Humanities and Social Sciences and the Department of English. That same year, she was named the Utah Professor of the Year by the Council for the Advancement and Support of Education and Carnegie Foundation. She initiated USU’s nominations for the Carnegie Professor award in 1995. Since then, 14 Utah State Professors have been honored. She is also a fellow for the Council on Undergraduate Research, the first and only humanist to receive the prestigious fellowship.

“The number of honors [Joyce] has been awarded is a testimony to her dedication to research, teaching and service,” Thomas said.

Kinkead’s presence is especially felt in the Merrill-Cazier Library, where multiple areas of the building, including the undergraduate research spotlight wall in the atrium, have been dedicated to her. Over the years, she has mentored 20 undergraduates, served on 20 master’s and doctoral candidates’ committees and headed the initiative to provide research funding to those in the humanities, an overlooked area in the research world.

“Dr. Kinkead always uses her successes to improve the lives of her students,” said Mark McLellan, vice president for research and dean of graduate studies at Utah State. “I am certain that without her, research at USU—among our faculty and our students—wouldn’t be what it is today.”

Named after the university’s first vice president for research, the D. Wynne Thorne Career Research Award has been awarded yearly since 1979 to a professor demonstrating excellence in research. Recommended by peers nationally and internationally and previous award winners, the awardee receives the opportunity to present their research in a lecture during the following year’s Research Week.