Too much of a good thing will become a bad thing when it all piles up. Utah State University’s newest USTAR professor, Foster Agblevor, is a scientist committed to finding ways to dispose of waste before it creates a problem. Think of it like recycling.

Agblevor comes to USU from Virginia Tech to work with USTAR and is a full professor in the Biological Engineering Department in the College of Engineering.

At Virginia Tech, poultry farms were creating a problem. More than 5.6 million tons of poultry litter are produced each year in the United States. Poultry litter — a combination of animal waste, wood chips, food particles and feathers — is used as agricultural fertilizer.

Poultry litter is a smelly mess, it’s hard to transport and takes up a lot of space, and, perhaps the most problematic — it leaves behind phosphorus deposits that lead to pollution.

“In Virginia, the Chesapeake Bay suffers from phosphorus pollution,” said Agblevor. “Poultry litter fertilizer has found its way to water sources because plants can only absorb so much phosphorus.”

The high levels of phosphorus create an environment ideal for algae growth. Algae create a “dead zone” and strip the oxygen from the water — and fish die. At the request of poultry producers, Agblevor has developed a solution.

Agblevor has invented a pyrolysis reactor to solve the problem of poultry litter and phosphorus pollution. A five-second chemical reaction creates three products from the waste. One, a producer gas is generated in the chemical process and is used to power the reactor; the unit is self-contained — more litter becomes more fuel to convert more litter. Two, bio-oil is produced from the poultry litter pyrolysis that can be refined into gasoline and other fuels. Three, charcoal encapsulates the remaining chemical compounds, like phosphorus, potassium, into a fertilizer tablet.

A 60 percent weight reduction makes the charcoal fertilizer easier to store than unprocessed poultry litter. It does not smell and is shelf-stable for extended periods of time. Phosphorus is slowly released and is more easily absorbed by plants — eliminating phosphorus pollution.

Agblevor has developed a portable pyrolysis reactor that can be taken on-site and used to dispose of the litter. Eventually Agblevor and the Commercial Enterprises team at Utah State University plan to commercialize the technology by way of a spinout company.

Agblevor is interested in finding solutions to problems — from pollution to the rising cost of crude oil.

Crude oil currently costs nearly $100 a barrel; the results are gas prices well above $3 per gallon. Agblevor’s solution is bio-crude oil created from organic material — grasses, trees and even algae. Through a catalytic pyrolysis reaction, Abglevor has been able to create bio-crude oil.

“The bio-crude can be refined like petroleum crude oil is refined,” said Abglevor.

In fact, bio-crude is refined in the same facilities, and at the same time, as petroleum crude oil. Refineries get “green credits,” and production costs are saved by not having to build a bio-crude oil facility.

The technology has been demonstrated on a small scale and renovations are underway in the USTAR BioInnovation Center on the USU Innovation Campus to make room for a pyrolysis reactor.

Agblevor’s plans for the future include working with the Utah division of forestry, fire and state lands to recycle diseased trees into bio-crude oil.

USU USTAR research has, from the beginning, been interested in using algae as an oil and fuel
source. Current research at USU involves turning algae oil into bio-diesel. The problem, according to Agblevor, is that harvesting the algae isn’t economical — there is too much water in algae and algae in water is too small to collect in a traditional fashion. Agblevor is in the beginning stages of developing a technology that would process algae suspended in water and turn it into bio-crude oil.

Agblevor’s research fits well within two of USU’s USTAR focus areas — biofuels and synthetic biomanufacturing. Bio-crude oil from Agblevor’s catalytic pyrolysis reactor can be used in the manufacture of bioplastics — a focus area within USU’s USTAR Synthetic BioManufacturing Center. This interdisciplinary research is exactly what USTAR was designed to facilitate.

“It’s not enough to simply invent things,” said Agblevor. “You need to have investors and move the products into the market.”

Agblevor’s vision fits well within the USTAR initiative’s goals to develop commercial partnerships that will have a positive economic impact for Utah and the nation.

“It’s easy to marry my vision with the vision of the state of Utah to conduct research, develop technologies and move those technologies into the market,” he said.

The Utah Science Technology and Research initiative (USTAR) is a long-term, state-funded investment to strengthen Utah’s “knowledge economy” and generate high-paying jobs. Funded in March 2006 by the state legislature, USTAR is based on three program areas. The first area involves funding for strategic investments at the University of Utah and Utah State University to recruit world-class researchers. The second area is to build state-of-the-art interdisciplinary facilities at these institutions for the innovation teams. The third program area involves teams that work with companies and entrepreneurs across the state to promote science, innovation and commercialization activities. 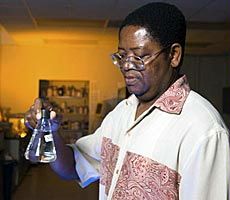 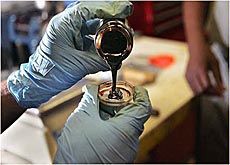