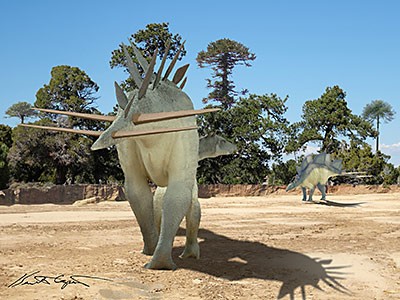 The three-foot spikes on a bob-tail is what gives this new genus of dinosaur its distinction. (Illustration by Kenneth Carpenter)

Paleontologists from Utah and Connecticut have discovered a new dinosaur that’s been right under scientists’ noses for the past 102 years. Meet Alcovasaurus longispinus, the dinosaur formerly known as Stegosaurus longispinus.

Over the past century, no one questioned the original species label given to the great beast when it was first uncovered in 1914 near Alcova, Wyoming. For one thing, scientists didn’t have much to go on since most of the specimen was destroyed in the late 1920s when ceiling pipes in the museum holding the specimen burst and flooded the facility. All that was left was one femur, plaster casts of the two most complete elongated tail spines, and a few photographs of the quarry and of the skeleton as it was displayed in the museum gallery.

While peer reviews were lacking at the turn of the last century, by the advent of the new century scholars showed a renewed interest in the bones. Ongoing work on stegosaurs by Peter M. Galton, professor emeritus at the University of Bridgeport, Connecticut, and Kenneth Carpenter, director and curator of paleontology at Utah State University Eastern Prehistoric Museum, found them at odds with some of their peers. One scholar from England concluded that the original species designation was invalid, that it was not, in fact, a new species of Stegosaurus at all.

Galton and Carpenter recognized anomalies as well, namely longer spikes and a shorter tail and a creature that stood a full foot taller than its Stegosaurus relative. Their research led them to conclude that what they were seeing was much more than a species of Stegosaurus, it was actually a new genus altogether based on specimen studies, both real and cast, and analysis of archival photographs.

Their paper has now been published (Jan. 27) in the Neuse Jahrbuch fur Geologie und Palaeontologie, an international journal of geology and paleontology, based in Stuttgart, Germany.

“We’re presenting it and we’ll see how it holds up under the test of time,” Carpenter said. “Who knows, somebody may conclusively prove that it’s not valid, although it would be hard to do because of the long spikes.”

Spikes that were up to three-feet in length, or about twice as long as the Stegosaurus. Its rather short tail, about 25 percent shorter than Stegosaurus, made it possible for the dinosaur to accommodate the extra-long tail spikes, he said.

“Besides the short tail, this bob-tailed stegosaur probably could not swing its tail as much as Stegosaurus based on what we know of the tail vertebrae,” he says. “So, having longer spikes makes sense as a way to compensate.”

This dinosaur is important, even though its genus line appears to be a dead-end, because it shows that the dinosaurs of the Jurassic period were far more diverse than scholars previously realized. Numbers of species and genera help fill in gaps and paint a more complete picture of what life was like 150 million years ago, he says.

This particular dinosaur has yet to be found in Utah. So far only Wyoming can lay claim to it, “but there is a chance that it could be found here someday,” Carpenter said. “It is possible that some of the partial skeletons referred to Stegosaurus might be re-identified as Alcovasaurus if we had the right parts.”

Parts like puzzle pieces waiting to be assembled and waiting to be named, because once named, they spring to life again through imagination, whether in a scholarly paper, on the pages of a child’s book or on the silver screen.

Carpenter says the fact that a new species of Stegosaurus named in 1914, and only now being recognized as a novel dinosaur, is another example of finding new dinosaurs in old collections. He has been in on the naming of maybe 12 of these creatures in his 30-plus year career. He has not kept track.

“Once one research project is done, I move on to the next one,” he said. “I don’t think about it.”

But he has welcomed the opportunity whenever it comes his way. He is currently trying to name a new species of armored dinosaur from material found north of Arches National Park. He has at least three new dinosaurs yet to be named that are currently in museum storage.

The realization that only one new genus of dinosaur is discovered every few years, places Carpenter and Galton in an elite group of scholars. Furthermore, these new finds are particularly significant when one considers that the number of dinosaur species from the Upper Jurassic sedimentary rock sequence, known as the Morrison Formation, only totals around 52.

What is most interesting to Carpenter is just how rare this particular find is. His museum houses a Stegosaurus stenops, probably the most common Stegosaur that is found with maybe 100 total individuals uncovered in the United States.

“I realize that sounds like a low number, but in paleontology circles, that is actually a very high number, because we’re only looking at a small portion of all the ones that ever existed,” he said. “So we now have another animal, the Alcovasaurus, which is increasing the diversity. So far it’s the only one of its kind that’s been found.”

And he got to help name it. 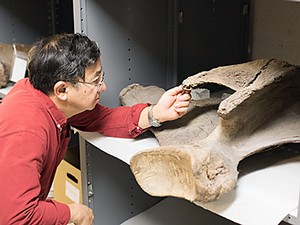 Dr. Kenneth Carpenter, director and curator of paleontology at Utah State University Eastern Prehistoric Museum, studies a bone in the museum's vast collection that is still in storage. (Photo by John DeVilbiss) 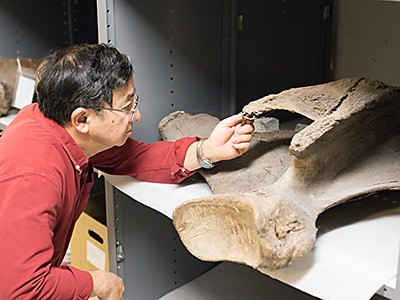