With the help of a contract from the U.S. Department of Energy valued near $1.5 million, Utah State University biologists and engineers have come together to clean up contaminated land around the world. Biology professors Anne Anderson, Joanne Hughes and Charles Miller are working with engineering professor Ronald Sims to research genetic information on five microbes that attack, or eat away, carcinogens and toxins in contaminated soils.
Sims discovered the microbes on a landsite in Libby, Mont contaminated by chemical carcinogens called polycyclic aromatic hydrocarbons (PAH’s). The site had been used by industry as a place to apply preservatives to wood, yet Sims found the land to be relatively free of toxins and asked the question, why? After conducting soil analysis tests, Sims found microbes in the soil that had destroyed the toxic chemicals.
Sims then collaborated with Anderson and Miller from the Utah State biology department in the College of Science to identify the microbes. The three Libby-site microbes responsible for the remediation were mycobacterium isolates. The other two mycobacterium isolates capable of degrading PAH’s were found at other locations in the United States by Carl Cerniglia at the Arkansas Toxicology Center. Because few of these mycobacterium isolates have been characterized genetically, Utah State’s Center for Integrated Biosystems funded the biologists to examine the genetic material for the five isolates. They answered questions about the size of their chromosome and whether plasmids were present in the mycobacterium using Hughes expertise.
“Putting together genomes tells us a lot about the history of the world and may even help us with its future,” said Hughes.
The Department of Energy will sequence the genetic material of the microbes, and the researchers will then participate in the annotation process by which genes in the sequences will be identified. The researchers will be able to understand the genetic material that allows these bacteria to degrade the PAHs and survive in the soil. Such knowledge may help researchers better understand and utilize the organisms to destroy PAH contaminants in the environment by applying engineering principles to microbial biotechnology, said Sims.
“This project shows mother nature’s capability to be a master engineer,” said Sims, biological and irrigation engineering department head. “Past disposal practices and accidental spills have put these carcinogens in our environment, and nature has figured out a way to cleanse herself. We want to be able to understand it better through genomic analysis.”
Engineers often use other human-made chemicals to clean up contaminated sites, but these microbes will provide a natural solution, said Sims. Bioremediation cleans up the environment by allowing living organisms to degrade or transform hazardous organic contaminants using natural biology. It offers an attractive solution to pollution cleanup because it can occur on-site and at relatively little cost compared to other alternatives, he continued.
“This research is extending itself to the world, and we are really excited about it,” said Anderson.
The group wants to fully understand how these microbes function and survive in the environment so contaminated sites around the world can reap the benefits.
Collaborations are currently under way in Nizhnekamsk in the Russian Federation to assist with the treatment of industrial residues, in Poland to renew soils for agricultural production and in the Netherlands to clean up sediments dredged from canals and waterways.
“I want to congratulate the Utah State team on the funding for this project,” said Joop Harmsen, senior scientist at Alterra Research Center and Wageningen University in the Netherlands. “PAHs have contaminated large amounts of sediment in the Netherlands, and doing this naturally through bioremediation is the most cost-effective way to treat the contaminated sediments.”
The research involves many levels of cooperation between the sciences and engineering fields but also extends to social scientists and economists. Utah State undergraduates and graduate students from the Colleges of Engineering and Science are also participating in the project. The researchers said student and faculty interest in this project is high because of its human-interest orientation.
In H.G. Wells’ classic tale “War of the Worlds,” invisible bacteria saved the world as well as the people in it. Through this project, life is imitating art and through these unique bacteria the world may stay a little cleaner, said Sims.
For more information about the bacteria contact Sims at (435) 797-2785 or ronsims@cc.usu.edu; for more information about the College of Engineering  visit its Web site;  for more information about the College of Science visit its Web site; and for more information about the Center for Integrated BioSystems, see its Web site.
Contact: Ron Sims (435) 797-2785, ronsims@cc.usu.edu
Writer: Maren Cartwright (435) 797-1355, maren.cartwright@usu.edu 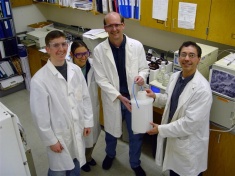 Farmland that could benefit from the mycobacterium 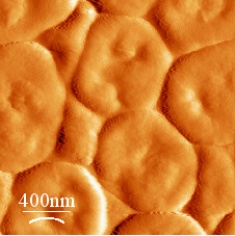 Mycobacterium flavescens. This image shows how the surfaces of the cells are depressed at least in the center; this is probably due to dehydration of the sample. Also, the oblong/oval shape of the cells are shown in greater detail in this image. The jagged edges of the cells can be attributed to scanning artifact and should not be considered features of the cells. 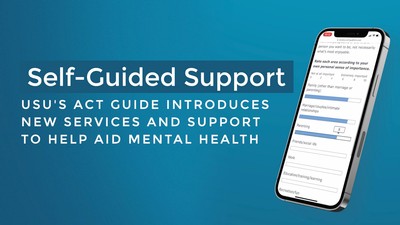