Utah State University undergraduate Beth Fowers spent a good part of her summer traveling over rutted, dusty dirt roads in Utah’s West Desert and remote reaches of Nevada’s northern Elko County. A vista of sagebrush for miles in every direction and its pungent summer scent might have proved overwhelming for some, but not Fowers, who grew up in the similar landscape of Kimberly, Idaho. She couldn’t have been happier.
“I was very grateful to get this job,” says Fowers, who conducted fieldwork as part of SageSTEP, a five-year, interdisciplinary research project aimed at restoring sagebrush communities of the American West. “I enjoyed working with many of the concepts we learned about in classrooms and working with graduate students within the college.”
Utah State is among ten organizations involved in SageSTEP, short for Sagebrush Steppe Treatment Evaluation Project, which is funded by a grant from the U.S Department of Agriculture and the U.S. Department of Interior’s Joint Fire Science Program. The project is exploring ways to improve the health of rapidly shrinking sagebrush rangelands of the Great Basin, which covers 190,000 square miles in Nevada, Utah, Idaho, Oregon and California.
Reno-bound motorists traveling past seemingly endless stretches of shrub-studded desert and the occasional last chance Texaco might find the notion that sagebrush rangelands are disappearing somewhat silly, says Mark Brunson, professor in the College of Natural Resources’ Department of Environment and Society and a project investigator. “In fact, scientists estimate the survival of only half the sagebrush steppe land that existed at the time of European-American settlement. And the rate of disappearance is increasing.”
Fowers, who is working toward a bachelor’s degree in conservation and restoration ecology in the college’s Department of Wildland Resources, was among a team of student researchers working at two of the project’s multiple research sites. The researchers are investigating the ecological, economic and sociopolitical effects of varied land management treatments, such as prescribed burning, mechanical thinning of vegetation and herbicide treatment, versus no treatment at all.
At the Onaqui site, about halfway between Tooele and Eureka, Utah, and at a Nevada site about three hours northwest of Elko, researchers divided the land parcels into four plots to observe what happens following four different scenarios: burn, mow, herbicide and control.
“From these sites we gathered vegetation analysis data,” says Fowers. “We collected shrub density information, overall plant species existence within the plot, occurrence and density of certain species or type of species and fuels data, along with vegetation and soil samples.”
Of particular concern to researchers, says Fowers, is the impact of a ubiquitous, non-native, invasive plant species called cheatgrass that appears with increasing frequency following any disturbance to Western sagebrush grasslands.
“Cheatgrass is a constant worry because it encourages a short fire cycle,” says Fowers. “A buildup of dry cheatgrass allows fire to occur more frequently and often on a larger scale than with the natural system.”
Cheatgrass sprouts early in spring and effectively crowds out native plants by using up scarce water and soil resources, says Fowers. It quickly dries in summer sun and wind and heightens fire danger.
As researchers evaluate treatment plots, Fowers says they’ll try to determine which treatments encourage higher densities of native perennial grasses, thus leading to healthier grasslands.
Brunson and colleague Gene Schupp, associate professor in USU’s Wildland Resources Department, are among more than 20 senior scientists who are coordinating the study’s efforts, training student researchers and determining the ecological and physical effects of land management treatment practices. They’ll also consider the economic and social aspects of treatments, including costs and benefits to Great Basin communities and residents’ and land managers’ perspectives about various treatments.
“This is a very exciting and important opportunity,” says Schupp. “Our multidisciplinary approach, combined with our large-scale experimental approach, will greatly contribute to our understanding of viable land management options.”
For Fowers, a Mortar Board Scholar who earned an associate’s degree from the College of Southern Idaho before transferring to Utah State, the project offers a glimpse of opportunities for further study. “Working on the project this summer has given me the opportunity to observe and work with the kinds of projects that I will be exposed to in the future,” she says. “It has given me the encouragement to continue on in school towards a master’s program.”
Related Links:
Contact: Summer Olsen, 435-797-8455; summer.c.olsen@cc.usu.edu
Writer: Mary-Ann Muffoletto, 435-797-1429; maryann.muffoletto@usu.edu 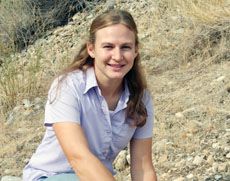 USU undergraduate researcher Beth Fowers is among a team of students collecting data at sites throughout the American West as part of the massive SageSTEP project. 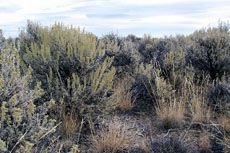 USU researchers say the sagebrush rangeland of the Great Basin is one of the most endangered ecosystems in North America. 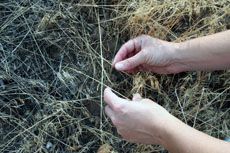 Cheatgrass is an invasive plant species that is encroaching upon native grasslands and heightening wildfire danger. 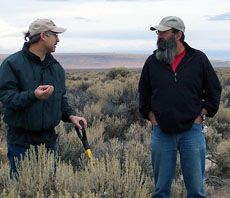