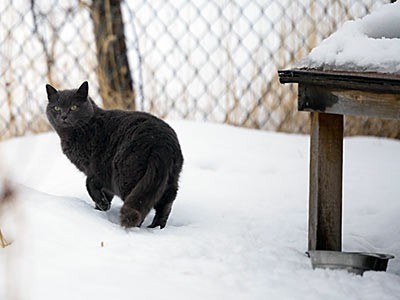 By Jillian Mccarthy in The Utah Statesman Wednesday, February 3, 2016

Aggie Cats is an organization at Utah State University dedicated to protecting and improving the lives of the feral cats on campus as well as managing the population.

The program just recently celebrated its 10-year anniversary and has plans of expanding its resources in the near future.

“Aggie Cats is based on the concept of trap-neuter-release, TNR, which has been proven to be the most effective way to reduce the number of feral cats,” said Whitney Milligan, director of residence life and one of the founders of Aggie Cats. “Cats pick where they live; we don’t decide that. Cats live around where people are because they are not wild animals even though they are feral and wild-behaving, they are still domestic. Cats aren’t like skunks or raccoons; they are not wildlife and they are very dependent on humans and human activity.”

“The first step of our program is to identify a location where cats are and then we establish a feeding station. We then perform TNR,” Milligan said. “After that, the cats are released where we found them and we continue to observe them, feed them once a day and water twice a day. We observe whether or not they are healthy and in need of vet care. We want to make sure that they are not suffering so that is part of what we do too.”

The first trapping took place near the Junction on campus 10 years ago. The pre-vet club performed the first TNR and this was started just as a demonstration on how spays and neuters were done. After the cats were released they started to notice that the number of cats were significantly decreasing. That is when the founders of Aggie Cats got together to figure out policies, and make it a true TNR program.

“For the past 10 years we have trapped and fixed about 80 cats,” Milligan said. “Based on the way that the humane society counts cat birth rate, a female cat goes into heat at four months old and say that cat has four kittens: two male, two female and then these kittens have babies and so on and so on. A cat can have three or four litters a year. Due to that calculation we have prevented the birth of over 9,000 kittens.”

Right now Aggie Cats has three cat colonies and one feeding station. There is one colony at the Junction, which is home to five cats. The second colony is located at the town homes on campus with a regular of four cats but during the winter it bumps up to eight. The third is Bob’s colony located next to the Student Living Center (named Bob’s colony because of the cat named Bob, who has been the only constant cat at the colony while other cats come and go), with five or six regular cats, but in the wintertime it bumps up to 11.

Some students are coming together to work on a service project for the Aggie Cats, in behalf of the National Residence Hall Honorary, NRHH, an organization affiliated with the Residence Hall Association, RHA.

“Our plan is to build six to 10 shelters for the cats of Aggie Cats,” said Tyler Thomas, a USU student and a resident assistant at Mountain View Tower. “It gets cold in the winter here in Logan, and it is not uncommon for feral cats to die due to the elements. We, the NRHH, seek to fix this problem by providing them with this much-needed protection.”

For students and volunteers involved with Aggie Cats, this is a way for them to give back and feel like they are a part of something that helps out some of USU’s animal life.

“For me personally, I love God and His creatures, and so I feel a responsibility to help them in their distress,” Thomas said. “I believe that it is a duty of any good person anywhere to relieve suffering wherever they might find it, be it among animals or humans. Building these shelters is a small contribution that I can make to help relieve some of that suffering and allow these cats to live a full and enjoyable life.”

“It is very beneficial when I get to see the cats and I get to touch them, that is always a positive reinforcement for me,” said Hannah Van Leeuwen, a USU resident assistant and senior at the university. “Not a lot of people on campus know that the cats are there, which is kind of sad, but it does bring a good purpose since there are people out there that want to get involved, that want to take care of animals and want to contribute. It is nice for those of us that have found this little piece of volunteer work. If you talk to the volunteers they are excited and passionate, they love seeing the cats and they love being a part of it. Everyone who feeds them is a part of the campus and it makes the cats part of the campus.”

Aggie Cats is funded by donations and runs on all volunteer work, so for anyone looking to become involved contact Whitney Milligan at whitney.milligan@usu.edu