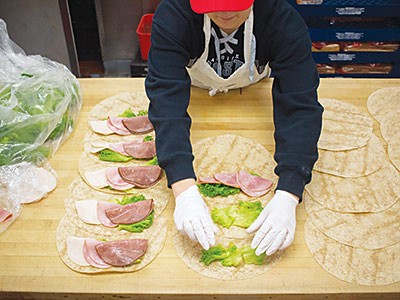 By Hannah Mcdonald in The Utah Statesman Thursday, February 18, 2016

Their handiwork can be found on the shelves at the Quick Stop.

It’s inside the bowls at the marketplace. On top of the sandwiches at Luke’s Cafe. At the Grab’N’Go station in the Hub.

It would be pretty close to impossible to find an on-campus dining establishment that doesn’t use food items prepared by the workers in the commissary. The commissary itself, however, remains a fairly well-kept campus secret. Secluded in the basement of the Junction, executive director of dining Alan Andersen calls its employees the “hidden heroes” of Utah State University dining.

“When you walk into the Hub, when you walk into Luke’s Cafe, you see all those people there and you get to know them,” he said. “And you pick up a sandwich made by the commissary, but you never realize that behind the scenes are all these wonderful students down in the basement of the Junction, cranking away on food.”

Sophomore Evan Rasmussen described the situation as feeling a little bit like Clark Kent’s. Utah State’s “undercover superheroes” begin working as early as 5 a.m., preparing everything from the yogurt parfaits sold in the Hub to the lettuce at the salad bars in the Marketplace and the Junction.

The commissary has existed in some form or another ever since Utah State dining was first established, but it really got its start when dining approved the first on-campus cafe in the old Merrill Library 15 years ago. Now, the commissary provides food for all three cafes on campus, all while making food items for its own Aggie Eats brand.

The commissary is the executive kitchen for all of on-campus dining, Andersen said. Because the cafes lack traditional kitchens, it falls to the commissary to provide the barbecue chicken, soup, salad and even condiments that other establishments do not have the space to prepare.

“The Hub has a kitchen, the Marketplace has a kitchen, the Junction has a big kitchen,” he said. “But the other operations don’t have kitchens at all. What you see is what you get in there. So that’s what the commissary is for. It’s really to provide a centralized kitchen that supports all the locations.”

Andersen has seen the expansion of the commissary’s work in his 26 years of working at Utah State. The commissary’s role, he said, has increased tenfold with the addition of new dining establishments in recent years.

“It’s kind of funny,” he said. “We used to deliver everything with a little mule, a little ATV with just a box on the back to take a few things over. Now we have a full-sized truck with a big box and a big lift on it because we’re taking carts and carts and carts of stuff over.”

Among those carts and carts of food items are such favorites as the avocado ranch served in the Quadside Cafe, the potato straws at Luke’s Cafe and the sushi available in the Hub. The bakery aids in the commissary’s goal, providing its end-all of bread and pastries sold on campus.

Andersen anticipates the role of the commissary will broaden even more once Huntsman Hall opens this spring. Huntsman Hall will hold a new cafe that, unlike the rest of the cafes, will serve full entrees like salmon. The commissary is preparing to provide for an increasing demand of product.

“Bottom line is, without what they’re doing, the cafes wouldn’t exist,” Andersen said. “Well, they’d exist, but the breadth of product they offer couldn’t exist. The commissary and bakery are just full of phenomenally skilled people, talented people, dedicated people. They’re over there and nobody ever sees them. Nobody ever thanks them. Nobody says anything like that. They’re definitely the superheroes.”