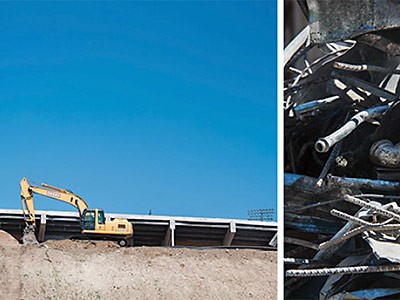 The Life and Death of Campus

By Jackson Murphy in The Utah Statesman August 29, 2015

In recent years USU has seen several large-scale construction projects like the 2005 $42 million Merrill-Crazier Library expansion and the 2012 $43 million Agricultural Science building. Also are ongoing projects, including the $42 million Huntsman Hall and the $30 million Student Recreation & Wellness Center. While these projects met relative esteem, some do not.

The rivalry between the ever-changing landscape of the USU campus and the nostalgia of its historical structures met at a crossroads in 2011 with an old dilapidated white barn.

In 2011, USU’s “Art Barn” had just received a $500,000 grant, much to the excitement of Cynthia Buckingham, director of the Utah Humanities Council.

The Barn, which was built in 1919 as a facility to house USU’s horses, eventually became the home to the largest fine arts program in the western United States. Since then it had taken on various other uses, until it was officially condemned in 2008.

The grant would be a glimmer of hope in the “Raise the Barn” grassroots campaign to save the structure, in hopes of turning it into the new home of the USU Museum of Anthropology. The half-million dollar grant would be just a small stepping-stone for the proposed project.

In all, the campaign sought an additional 7.3 million dollars to update the barn and fill the positions necessary for its upkeep. In a 2011 Herald Journal article about the grant received for the barn Buckingham said, “You have something that’s a resource that’s not replaceable. It’s a lot better than bulldozing the thing and putting up some newfangled structure that doesn’t fit us.”

However, early 2015 plans for the Barn to host the USU Museum of Anthropology were abandoned after funding slowed and officials sought a different location. Over the summer the 96-year-old barn was torn down, and will be replaced by a 13,000-square foot Welcome Center. The Welcome Center will host facilities for Welcome Center, Alumni Relations and USU Advancement and Commercialization. It will also include a USU Credit Union branch on the first floor.

Alyssa Craig, an alum who graduated in 2011, saw several buildings go up and come down while she studied at USU. Freshman year Craig saw the completion of the newest engineering building, as well as the tearing down of the old Agricultural Science and the building of a new one. She even voted for the creation of the Student Recreation & Wellness Center.

“I heard the Art Barn was being torn down and it made me really sad,” Craig said. “It depends on the building, but if it has a lot of historical value, put in the effort to give it some sort of function. Give it a new purpose.”

According to administrators, intentions are never to tear something down because of its age.

USU’s Vice President for Business and Finance Dave Cowley said, “As a general rule we assume that significant buildings are permanent facilities on our USU campuses.”

“When possible we look to renovate a building that is nearing the end of its useful life and return it to full productivity. However, depending on the age and condition of the building as well as other factors, we sometimes find that major renovation costs exceed the cost of replacing the building with a new structure. We evaluate the needs and economics of each project and always try to maximize the value of dollars spent for capital facilities,” he said.

Despite her reservations about the Barn, Craig admitted to her excitement about the changing campus. “I think it’s cool, I think it shows progression and it shows the university meeting needs now that it wouldn’t have been able to in the past.”

Historically USU has always been committed to progression and new facilities and renovations have always been a part of that said Cowley.

“As the university continues to move forward in pursuit of its teaching, research, and public service mission, continued development and redevelopment of facilities is certain to be a core component of meeting our needs,” he said.

“None of those decisions will be made until all of the options have been considered which won’t likely happen until the new facility has more certainty of becoming a reality,” he said.