Thirty-nine Utah State University Air Force ROTC cadets got to take a closer look at Air Force life and active duty following an airlift to McChord Air Force Base in Washington. The USU cadets flew to Washington on a C-17 Globemaster III, said cadet Brigham Moore, public affairs officer for USU’s detachment 860.
“Once a year the cadets from Utah State take part in a base visit where they take a closer look at what happens every day as an officer in the United States Air Force,” Moore said. “Each of the cadets, after graduation, will commission as a lieutenant in the United States Air Force.”
The base visits allow the students an opportunity to look to the future and have a taste of what is to come, Moore said.
“My favorite part was that it felt like a deployment — getting on the plane and walking out of the big cargo doors with all our gear instead of just jumping on a bus and going down to Hill Air Force Base,” said cadet Joel Darrington, a senior at USU. “We learned a lot about the airplane itself and the trip was green.”
Darrington’s color comment referred to green grass of Washington. The cadets were able to observe a static display of the C-17 aircraft, asking questions and getting a hands-on look at the plane.
“The trip was beneficial for two reasons,” said cadet Devin Dalton. “First, it built camaraderie between us and broke down the barrier of upper classmen versus lower classmen. It also gave us a better understanding of Air Force life.”
Cadet Patrick Kelly agreed, saying the change of pace and different environment was good.
“Everybody was a lot more laid-back,” he said. “I really felt like I could get to know everyone.”
The plane the cadets traveled on, the C-17 Globemaster III, is the newest, most flexible cargo aircraft to enter the airlift force, Moore said. The USU cadets learned it is capable of lifting troops, cargo and humanitarian supplies to established bases or to the forward bases in a deployment area. It is the most modern airlift aircraft used by U.S. Air Force today.
Contact: Cadet Brigham Moore (435) 512-5894 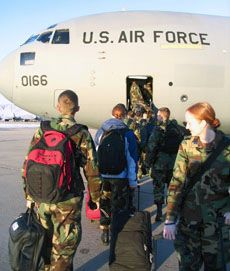 Cadets, the SLC (Self-Loading Cargo), load the C-17 at Hill AFB in Utah. The flight took the cadets to McChord AFB in the state of Washington. 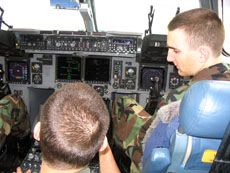