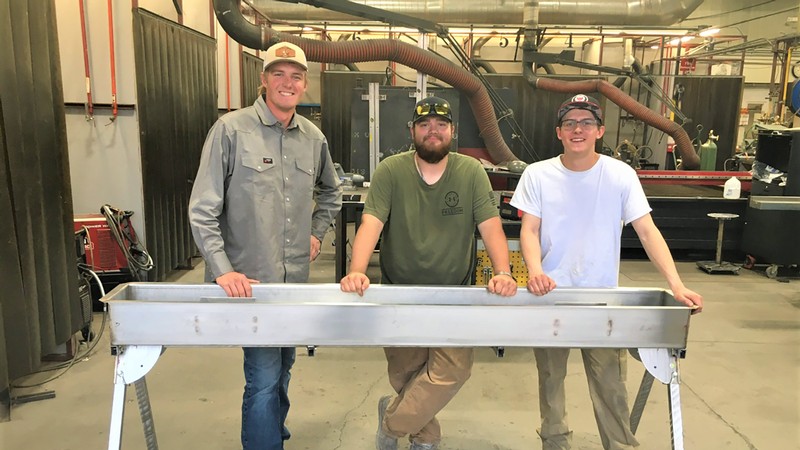 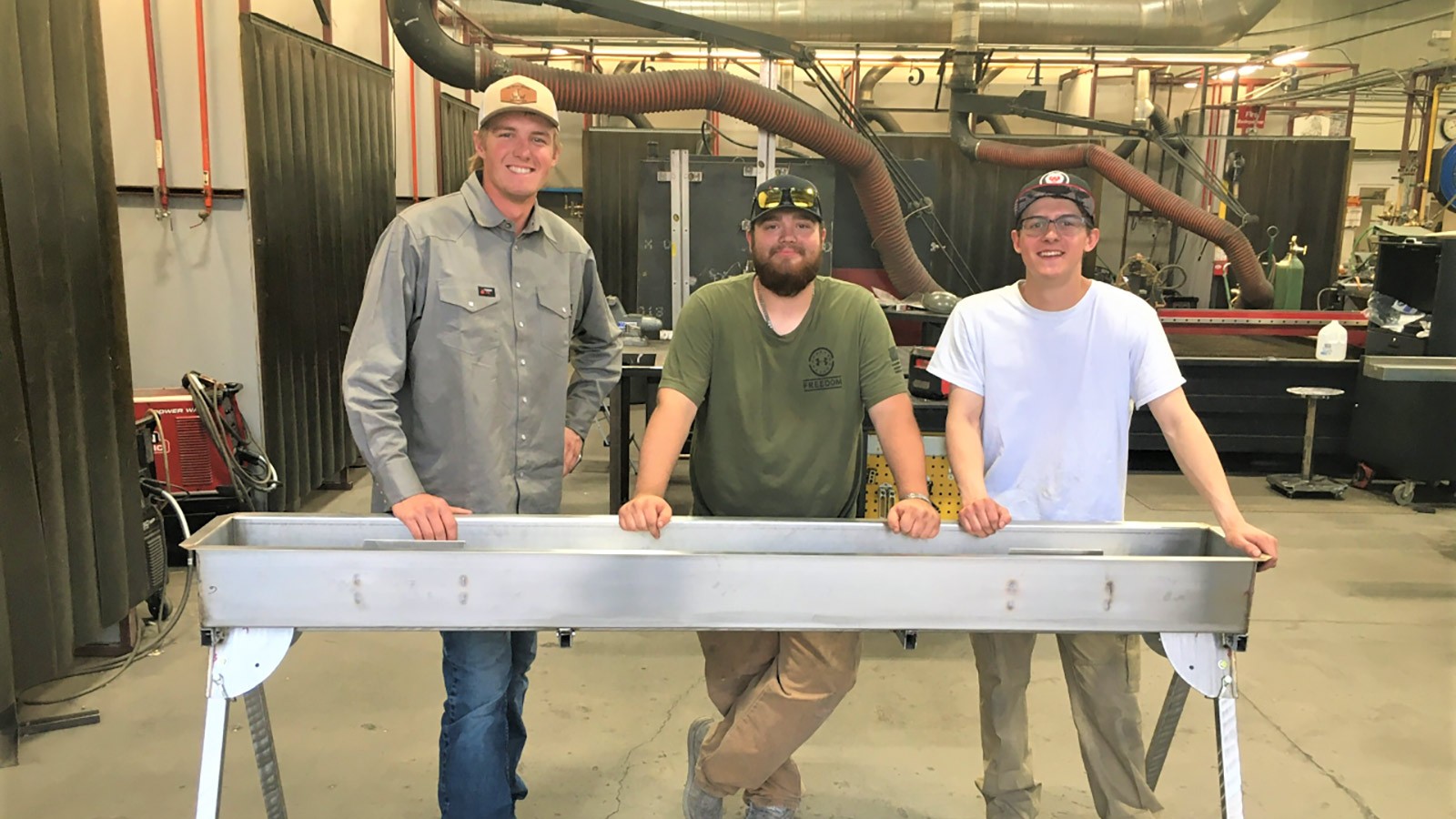 The 2021 team consists of welding students Branson Gross, of Vernal, Matt Warren, of Mapleton, and Nate Wright of Payson. Together they excelled at the contest’s task of making a dip tank at the Price campus’s welding facility. This year’s competition was virtual, requiring proctors at each site and that teams were on camera during the event. The 6.5-hour timeframe was met fairly easily due to the team members’ diligent preparation. The contest took place during a record-breaking heatwave, and temperatures inside the shop approached 90 degrees while the students worked. Their camera overheated during filming, and Austin Welch, assistant professor of welding at USU Eastern and the team’s advisor, had to put it in his office refrigerator to cool for a few minutes before continuing.

The Welding Fabrication Competition was one of many contests held as part of the SkillsUSA National Leadership and Skills Conference (NLSC), an annual conference and competition, that most recently hosted 6,500 contestants in 106 separate contests in areas ranging from welding to commercial baking to medical terminology. USU Eastern won the first national SkillsUSA team welding contest in 2008 and this year’s national title marks the seventh gold medal a USU Eastern team has won in the past 13 years, in addition to one bronze (2009), and two silver (2010, and 2015) – bringing USUE’s total medal-count in the event to 10.

According to the organization’s website, “SkillsUSA is a partnership of students, teachers and industry working together to ensure America has a skilled workforce. We help each student excel. A nonprofit national education association, SkillsUSA serves middle-school, high-school and college/postsecondary students preparing for careers in trade, technical and skilled service (including health) occupations.”

To qualify for the national competition, teams first had to win the organization’s Welding Fabrication Contest at the state level – meaning that in addition to performing best in Utah, the USUE team competed against the best team from every other state.

Typically, the NLSC is held over the course of a week in Louisville, Kentucky. The contests run through the week and the awards ceremony includes around 20,000 attendees. In the Welding Fabrication Competition, teams are given identical project blueprints with identical materials that they must build within 6.5 hours. Teams are judged not only on the quality of their work, but on teamwork, safety and in-contest presentation. Additionally, teams design their own blueprints using CAD software to propose a future project which is submitted ahead of the building competition.

In order to comply with COVID-19 best practices, the 2021 competition was completely virtual. To ensure contest fidelity, each team was required to film their build in their school’s shop and be monitored by a third-party industry proctor who had to be an AWS Certified Welding Inspector.

Branson Gross, who is working toward an associates in welding technology, shared his experience working on the project.

“The hardest part of the welding competition was that this year it was virtual,” said Gross. “We didn’t have a final set of prints till days before the competition itself. It was challenging trying to make something perfect that we had minimal practice on.”

This year, the contest project was a dip tank that will be used to treat standard-sized lumber for the organization Sleep in Heavenly Peace (SHP). After fabricating the project for the competition, each team donated their completed dip tank to SHP to be used to treat lumber the non-profit uses in building beds for needy children throughout the United States.

Another student competitor, Matt Warren, who is also pursuing an associates in welding technology praised the competition as a chance to collaborate and develop communication and fabrication skills.

“I would definitely compete in the competition again if I had the chance,” said Warren. “I believe the experience to collaborate as a team made me a better fabricator. I would highly recommend participating in this competition to other welding students.”

Welch, attributes the welding program’s success to dedicated and hardworking students. He also emphasized that the SkillsUSA competition helps solidify USU Eastern as a nationally recognized welding program that attracts students from all across the nation. An increasing number of students in the past few years have come from as far away as Alaska, Connecticut and Texas, among other states, to pursue the very best in welding education and training.

Nathan Wright, the third member of the fabrication team, cited quality instructors and talented, successful alumni as his reasons for choosing USU Eastern over other options.

“Exceptional students like these reciprocate their own hard work, competitiveness, and overall excellence directly into our program,” said Welch. “I couldn’t hope to adequately describe their influence on our program, USU Eastern, and Utah State University as a whole. It is my great privilege to be their instructor.” 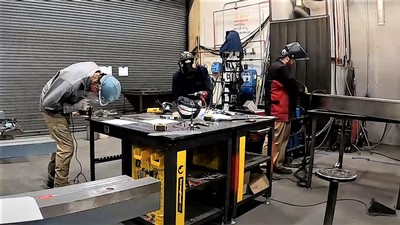 Team members at work during the national competition. 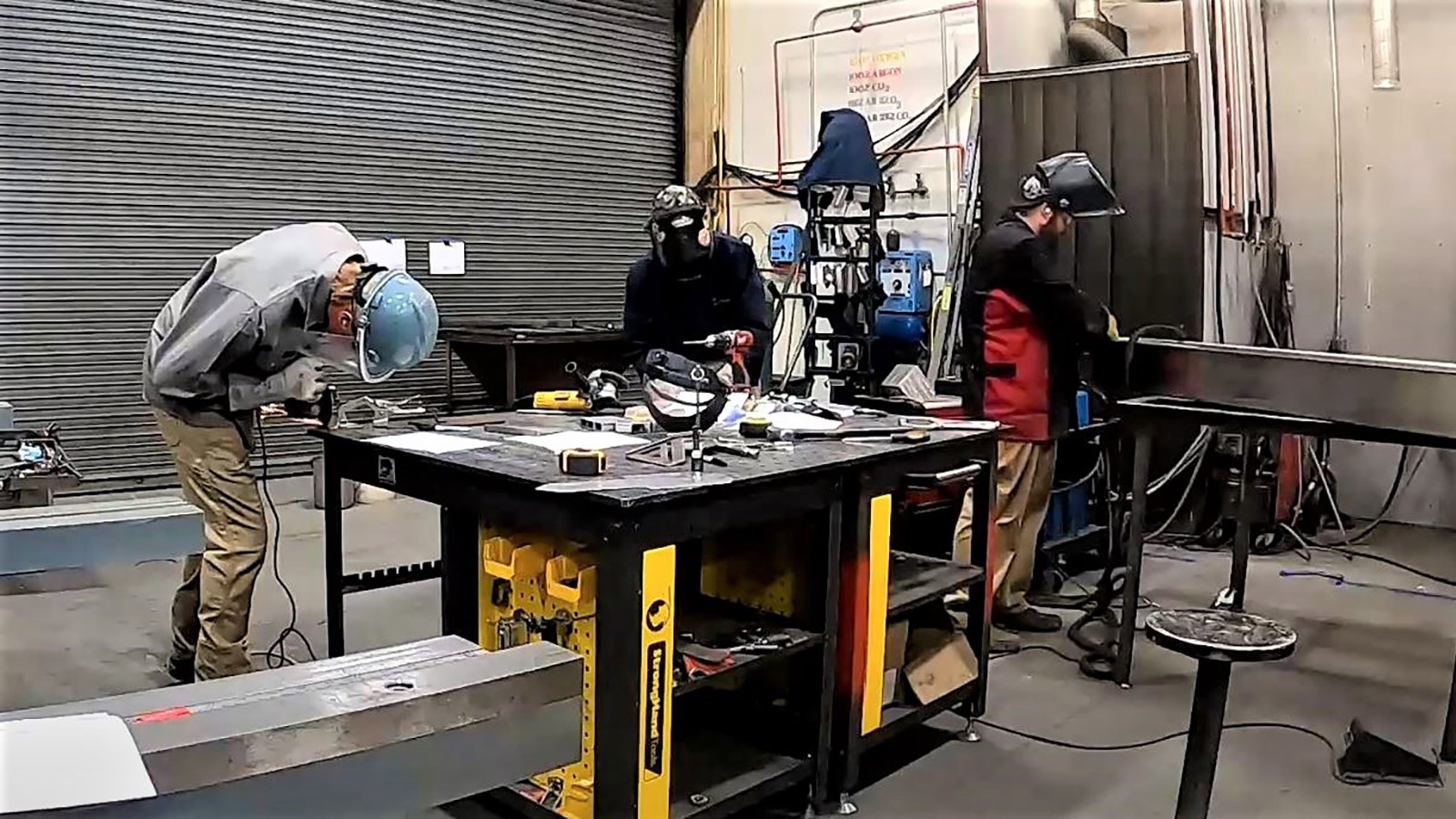 Thanks to the generous support of donors, two new endowed professorships have been created in the Utah State University College of Engineering. 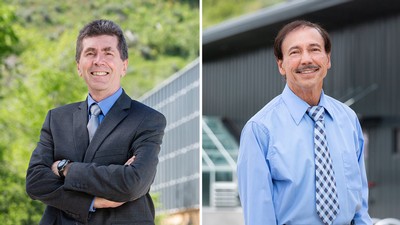