The U.S. Military may soon produce some of its own fuel by growing biofuel crops on land surrounding bases.

Utah State University Extension, in collaboration with The Louis Berger Group, was recently awarded the Outstanding Sustainable Planning, Design or Development Initiative by the Federal Planning Division for the “Feasibility of Energy Crops Grown on Army Lands” proposal.

The plan and award will bring biofuel crops on military bases one step closer to reality.

The Federal Planning Division of the American Planning Association invites planners working for and with federal agencies to reimagine federal landscapes at all scales, from highways to national parks, from military installations to intrastate watersheds.

According to Dallas Hanks, director of the Center for Agronomic and Woody Biofuels, which is part of USU Extension, the award gives the concept important national exposure and access to federal agencies that can push the program along.

“The Department of Defense manages more than 30 million acres; about 4 million of those acres could potentially be used to produce 400 million gallons of renewable biofuels annually for use by military vehicles,” Hanks said. “This not only saves the military money but it replaces petroleum with a renewable, cleaner fuel resource. We are working with eight bases, seven Army and one Air Force, where we hope to start producing biofuels soon.”

According to Keith Eastin, vice president of strategic planning at The Louis Berger Group, this can be a source for substantial amounts of renewable fuel for the military.

“Sometimes the obvious answers to renewable energy are right in front of us,” he said. 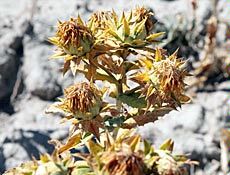 A variety of crops such as Safflower can be gown for biofuels. 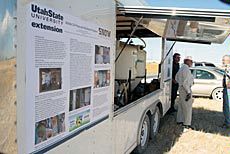 USU Extension has a biofuels demonstration trailer that can be transported to remote sites.