It’s been 20 years since Utah State University’s Get Away Special “GAS” student research team has sent an experiment into Earth’s orbit. The renowned team, largely responsible for USU sending more student-built experiments into space than any other university in the world, sent at least 11 payloads containing more than 30 projects into space aboard NASA’s space shuttles between 1982 and 2001.

In the wake of the 2003 Columbia disaster, NASA discontinued its Get Away Special program (from which the USU team takes its name), leaving the USU team without a ride into space, but hardly idle. Since 2001 to the present, the team, made up of undergraduates of varied majors, has secured passage multiple times through NASA’s highly competitive Microgravity University, flying experiments on microgravity “Vomit Comet” aircraft, as well as using high-altitude balloons, to continue to propel experiments, if not into space, at least into weightlessness.

Following a successful proposal submitted to NASA in 2013, the team is poised to send a CubeSat (cube satellite) into space in December 2021, aboard the SpaceX CRS-24 resupply rocket bound for the International Space Station. The USU team was awarded the opportunity to participate in the mission as part of NASA’s CubeSat Launch Initiative.

“Our team is set, once again, to make history,” says student GAS team coordinator Jack Danos. “This is not only the GAS Team’s first CubeSat sent into space; it’s Utah’s first, solely undergraduate-built, CubeSat, as well as one of the first student-built CubeSats in the nation, to launch into orbit.”

The project represents nearly a decade of painstaking research and sweat by Aggies who preceded and bolstered efforts by the current team in preparation of the innovative design. The CubeSat, named GASPACS (Get Away Special Passive Attitude Control Satellite) features a novel inflatable boom. Tightly folded into the roughly four-inch square USU spacecraft, the boom addresses common challenges in deploying structures in space.

“It takes tremendous energy and expense to get an object into space, meaning that size and weight are large limitations on satellite designs,” says Danos, an undergraduate mechanical and aerospace engineering major, who’s led the team for the past year and a half. “Our CubeSat attempts to solve these problems with a compact boom, tucked into the satellite, that expands in space and acts as a passive-control mechanism.”

Danos says the CubeSat will fly much like an arrow on Earth, with the inflated boom trailing behind the main body of the satellite.

“Without the boom, the satellite would slowly spin as it orbits, but the small amount of air still present in Low Earth Orbit allows the satellite, equipped with the boom, to aerodynamically stabilize,” he says. “You can imagine these principles – a compact design that expands in space and a passive control solution that requires no power source – being applied to much larger structures needed for space exploration and research.”

Unlike previous USU GAS experiments, encased in cargo canisters, sent aboard the space shuttles and returned to the students after each mission, the current CubeSat will not return from space.

“With the shuttle and microgravity missions, GAS team members had the opportunity to retrieve their experiments and download and analyze the data,” Danos says. “That won’t be the case for us, so we have to include communications capability inside the satellite to transmit data back to us, while it’s still in space.”

The primary goal of the satellite, he says, is to transmit a photograph of the inflated boom back to the researchers. To accomplish this, the student team has erected an antenna on top of USU’s Dean F. Peterson Engineering Laboratory Building, from which they’ll capture data from the satellite for analysis.

“It’s been a huge undertaking and a lot of work to meet NASA’s stringent deadlines,” says Danos, who leads a team of about 20 undergraduates. “Our team members are busy with demanding classes, as well as jobs to support themselves. They’re performing professional-level space research on top of all of that.”

With the launch of the CubeSat, the GAS Team will recognize a former Aggie who played a pivotal role in the team’s establishment. The small satellite is engraved with the name of Professor Gil Moore (1928-2020), who famously leapt to his feet during an October 1976 professional conference presentation, as a NASA representative was announcing the new program, and offered a personal check to cover the cost of USU’s first payload reservation.

“We’re coming full circle,” says Professor Jan Sojka, head of USU’s Department of Physics, who mentors the GAS Team. “This is an exciting time for the team.”

Sojka is quick to emphasize the student GAS team runs the project on its own, with very little intervention from faculty.

“This is what makes USU’s team unique,” he says. “Some universities ‘allow’ their undergrads to help with faculty research. That’s not the case with us. The students are in charge.”

This month, the GAS Team conducted the final vibration testing, required for the CubeSat’s December launch, at Rocky Mountain Testing Solution in Ogden, Utah, and the device passed with flying colors. Danos, whom Sojka praises as an “outstanding student leader,” will soon travel to NASA partner Nanoracks’ commercial space service company facility near Houston’s Johnson Space Center, to perform final integration of the USU CubeSat prior to its end-of-year launch. The Mandeville, Louisiana native also plans to travel to Florida’s Kennedy Space Center, accompanied with several team members, for the December launch.

“This has been an opportunity of a lifetime,” says Danos, who is the recipient of the College of Engineering’s William and Delma Wagstaff Endowed Scholarship and the Rocky Mountain Power Foundation Scholarship. “I encourage other Aggies interested in space, whatever their major, to get involved in the GAS Team. No experience is required. We’ve all started from ground zero and learned as we went along.” 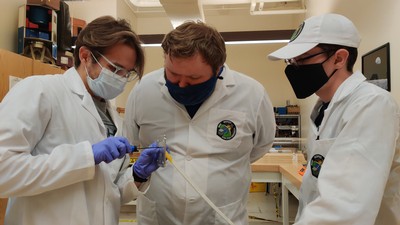 In their campus lab, USU GAS Team Summer Fellows, from left, Cooper Gowan, Andrew Nelson and Carter Page, assemble the boom for their CubeSat, which launches into space in December 2021. Jack Danos. 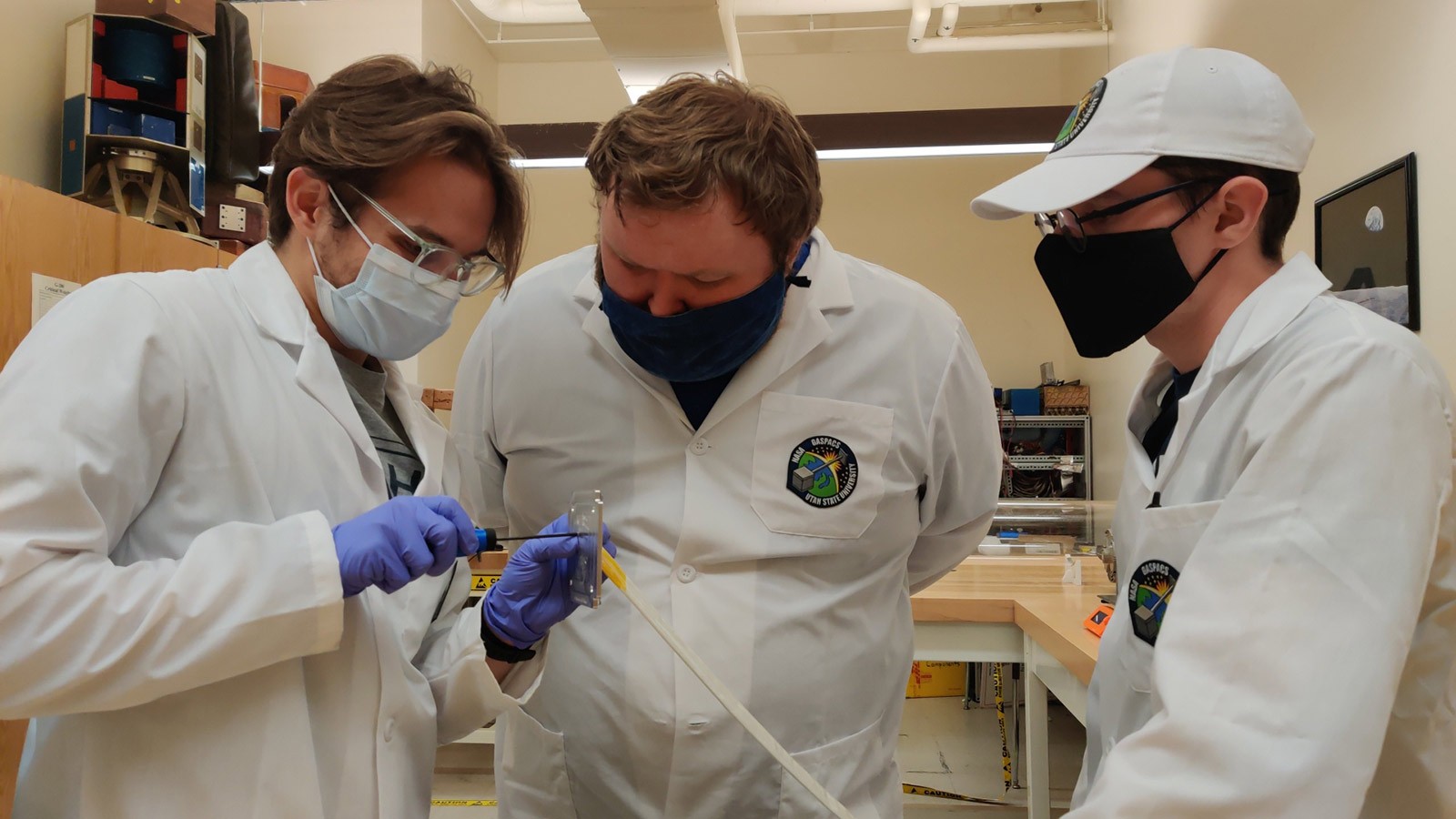 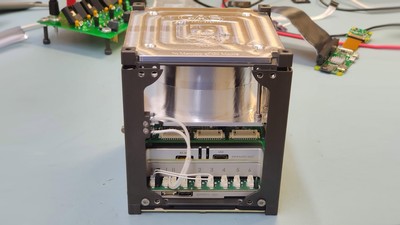 The 4x4-inch GASPACS CubeSat encloses an inflatable boom. Etched on the satellite is 'In Memory of Gil Moore,' honoring the late USU professor who secured the team’s first shuttle reservation in 1976. Jack Danos. 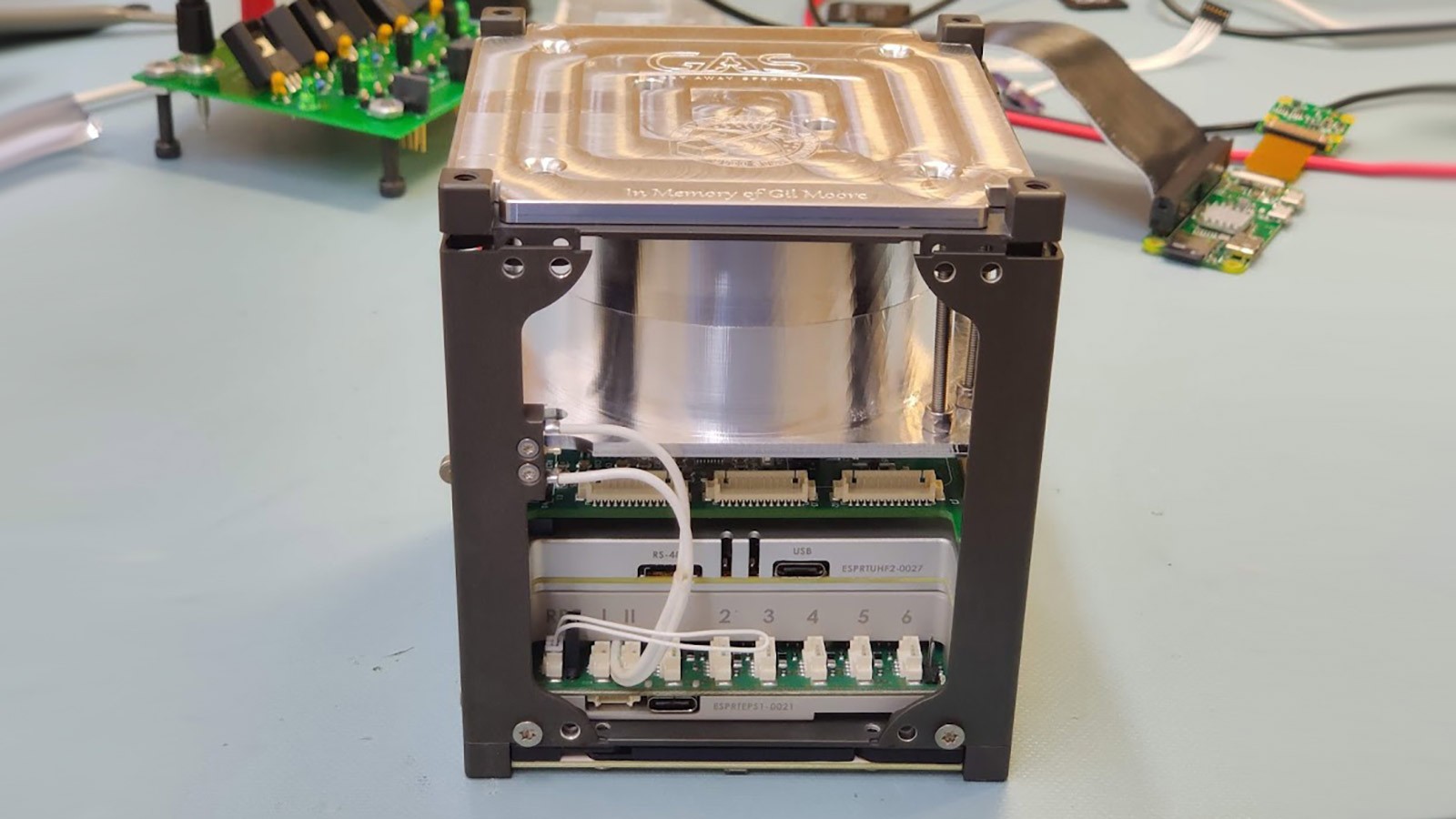 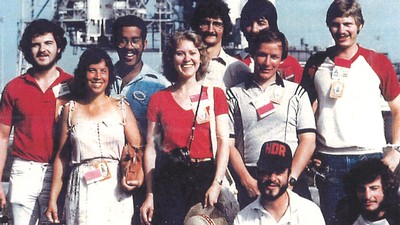 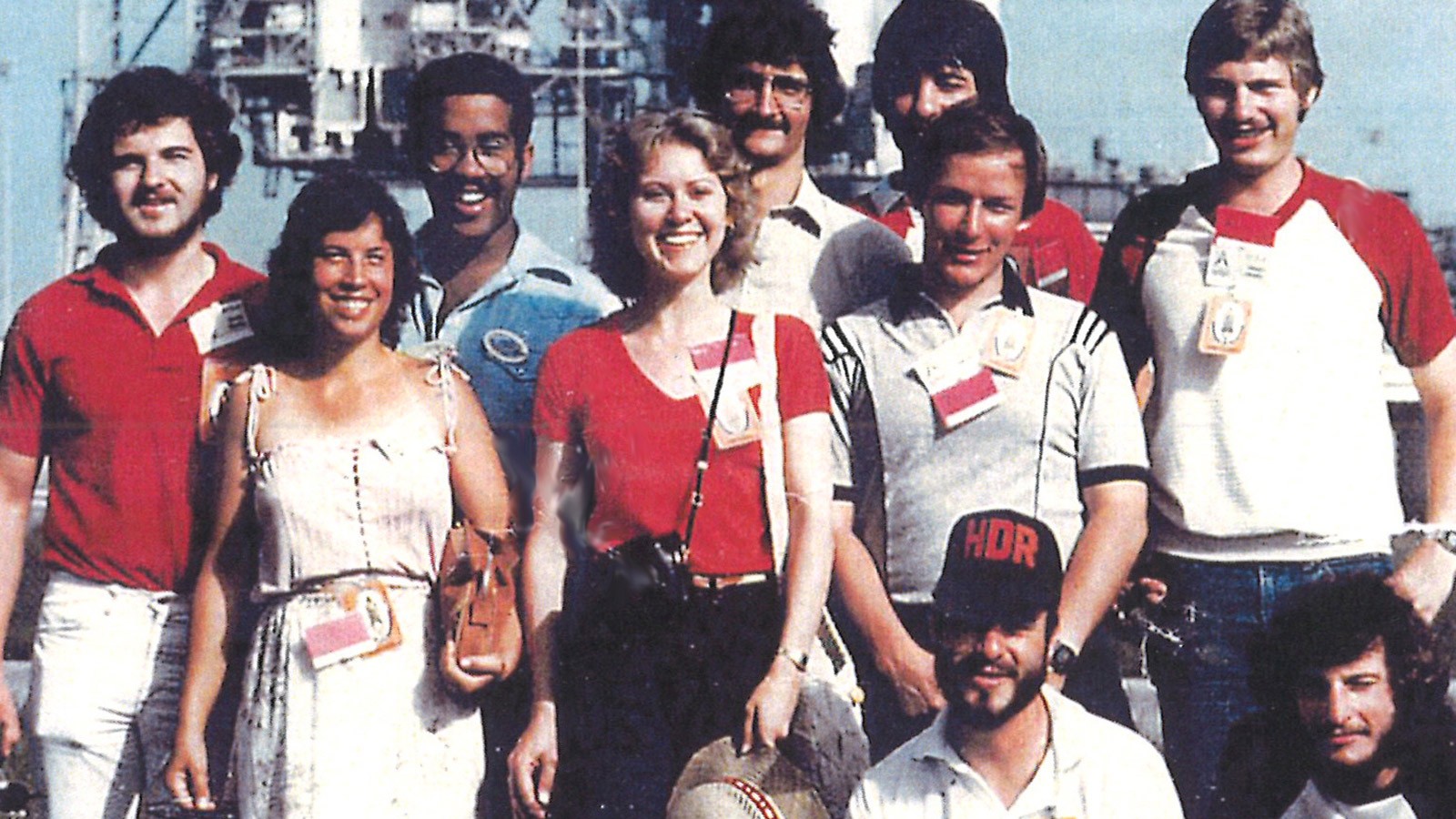