When a 200-plus-pound piece of sensitive electronic equipment is hoisted onto a moving conveyor belt and stowed with a lot of other heavy objects, bad things can happen.
Just ask Gordon Richins, the consumer liaison from the Center for Persons with Disabilities at Utah State University. His motorized wheelchair has suffered a lot of damage during the 100-plus flights he has taken.
“It’s a national issue, it’s not just my issue,” Richins said. In 2007, the Aviation Consumer Protection Division of the U.S. Department of Transportation received 455 complaints of damaged wheelchairs and 136 complaints regarding their storage and delay. An additional 369 complaints were registered regarding other assistive devices.
So Richins set out to find a solution with the help of Stan Clelland, the assistive technology lab coordinator for the CPD at USU. They experimented with containers, color-coded wires and Bungee cords.
In the end, their solution was a big box and tie-down straps. The mobility device can be steered in and strapped down so securely that the crate can be turned on its side without impacting the chair. It has built-in windows through which anyone can check on the security of the chair. It can be lifted with a forklift, and if it is dropped or tipped the chair is semi-suspended and protected from impact. Handles on the box allow it to be lifted; castors let it roll. Its shape is stackable.
The two collaborators took their design to the Technology Commercialization Office at USU and applied for a patent in 2008.
Over the 2008-09 school year, market research students at USU took on the box as a class project. They concluded that it would fill a niche that is currently empty in the marketplace, but the ownership and use of the boxes would best be left to the airlines. That way, travelers would not have to worry about storing a big box when they go on trips.
The airlines have not yet responded to the idea. Still, the Air Carrier Access Act makes the airlines financially responsible for damage to assistive devices, and the inventors say those charges could add up. Mobility equipment ranges from hundreds to tens of thousands of dollars in value.
The inconvenience to the people who use the equipment goes far beyond repairs. Many mobility devices are styled for the specific needs of the individual who uses them. Repairing or replacing them takes time, and during the wait the people who depend on them may be left stranded.
It’s a scenario Lopeti Penima’ani understands too well. The access chair of the Disabled Rights Action Committee in Utah and the user of a motorized chair, Penima’ani was interviewed after returning from a trip to Washington, D.C. , where he lobbied and participated in demonstrations. Both his chair and the chair of his roommate were damaged in flight.
“I travel extensively with several other people who are advocates,” he said.
His mobility device was damaged in five of the seven flights he took last year. The year before, it sustained damage in eight out of eight flights. The 400-pound mobility device is too heavy for one or two baggage handlers to carry, he said.
Once, his chair needed to be replaced, costing the airline $19,700 and leaving him to use a temporary chair that did not have the elevating leg rests and tilt and recline features he requires. He waited six months for the correct chair to arrive.
He is glad that the two CPD inventors are looking for a better way for his chair to fly.
For now, Richins takes his own precautions. Only his back-up chair goes on trips. He makes sure it is folded properly before turning it over to baggage handlers, and these precautions reduce the chances of damage, though accidents still happen.

One thing he doesn’t do is stay home. Travel is part of his job. 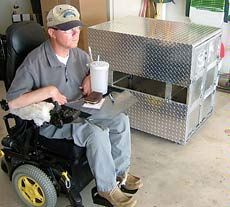