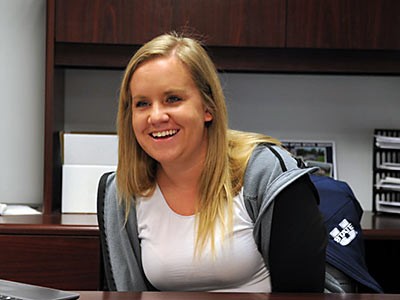 The Student Life section of Utah State Today highlights work written by the talented student journalists at Utah State University. Each week, the editor selects a story that has been published in The Utah Statesman or Utah State News Service (formerly The Hard News Café) or both for inclusion in Utah State Today.

Behind the Scenes: Lighting the ‘A’ Blue

Lighting the “A” blue at sporting events comes with all the fanfare, buttons and special effects. What it really comes down to, however, is a small click of a mouse on a computer.

“We just have a software on our computers,” said Megan Allen, assistant media relations coordinator for athletics. “It just says ‘white’ or ‘blue,’ and you click on which one you want it to be.”

Allen has been “clicking the button” for six years at Utah State, starting as an intern with the athletics department. Her first few times lighting the “A” blue, Allen said, were exhilarating.

“When I started, I was like, ‘Oh my gosh, this is the best thing ever,'” she said. During her studies at Utah State, she always wondered who lit the “A” blue. “Then all of the sudden, I was that person.”

Six years later, Allen just considers it part of her job, but it is still special to let friends and family click the button occasionally.

“We’re just like, ‘Hey, want to do something cool?'” she said. “It is cool to let people do their one time.”

Allen’s brother Bracken Allen, a junior majoring in economics, had the opportunity to light the “A” blue in October. Megan Allen said he enjoyed the experience — that it “made his life.”

“Honestly, I kind of feel like the Wizard of Oz,” said Kyle Cottam, the media relations assistant athletic director. “We’re the man behind the curtain pushing the button and making stuff look cool. Plus we have flying monkeys working in our office.”

Cottam, who also works as the commissioner of the Mountain Rim Gymnastics Conference, has been working with the Utah State Athletics Department for almost two years.

“Back in the day, I think there legitimately was a switch on Old Main Tower, and somebody had to go and do that… But in the past few years it’s gotten streamlined to just being on the computer, super easy,” Megan Allen said.

Lighting the “A” blue happens behind the scenes on a computer program, but “pushing the button” happens in front of crowds at games. A small model of Old Main is brought out, and a designated person or group pushes the button on top. A video showing the “A” changing from white to blue plays.

“So when we do that, it doesn’t actually light it, I’m not going to lie. We’ve already lit it at that point,” Allen said. “The video they play is filmed from last summer. But it’s a fun addition.”

Many treasure the tradition of “pushing the button.” Student body president Trevor Sean Olsen said the act has been on his bucket list since he was a freshman. On Feb. 9, Olsen got a call from an athletics intern at a basketball game against New Mexico.

Even though people don’t actually light the “A” blue, Olsen said the experience is still memorable because of the famous tradition.

“I think that while it may not be the real thing, just the fact that you get to participate in something so big that the whole entire community knows about it, is special,” Olsen said. “Whether it was real or not, it was still special, at least for me.”

“It’s fun for them to at least think they’re being a part of that,” Allen said.