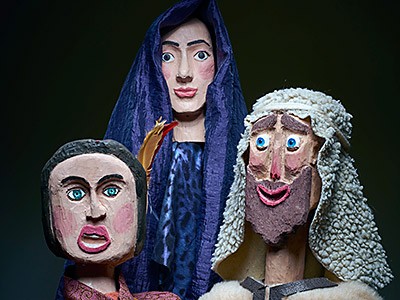 Puppets made by Caine College of the Arts students at Utah State University for the puppet opera presentation of "La Liberazione di Ruggiero dall'Isola d’Alcina."

Francesca Caccini’s The Rescue of Ruggiero from the Island of Alcina, a puppet opera more commonly known as La Liberazione di Ruggiero dall’Isola d’Alcina, premieres for the first time at Utah State University March 18 at 7:30 p.m. and March 19 at 1:30 and 7:30 p.m. The performances take place in the Morgan Theatre of Utah State University’s Chase Fine Arts Center on the Logan campus.

The performance is a comic opera in four scenes and is considered to be the first Italian opera performed outside of Italy. Two sorceresses, Alcina and Melissa, battle for Ruggiero the warrior. Melissa will also liberate Alcina’s former lovers who have been turned into plants and trees.

As part of the Caine College of the Arts Visiting Artists and Scholars Series, Dmitri Carter, professional puppeteer and founding member of the Carter Family Marionettes, will be the puppet and stage director for the production and Craig Trompeter from the Haymarket Opera in Chicago is the musical director.

Carter is currently the director of the Northwest Puppet Center and has worked there since 1996. He has traveled to Uzbekistan, Austria, Germany, China and more researching and teaching puppetry.

Trompeter has performed at many locations, including the Metropolitan Museum of Art, the Art Institute of Chicago and the Glimmerglass Festival. He is currently the artistic director at the Haymarket Opera Company.

In Logan, the opera is presented by the students of the Caine College of the Arts and the Performance Practice Institute (PPI). The PPI embodies a project-based approach to the study of the history of performance, which enriches the intellectual and artistic life of the students involved while making accessible to Utah audiences exciting concerts of lesser known repertoires.

A pre-concert talk by Suzanne Cusick, professor of music at New York University, begins at 6:30 p.m. March 18 and 19 in the Morgan Theatre of USU’s Chase Fine Arts Center. Those attending can also meet the puppets on the stage following the Saturday matinee performance of the opera.

The event is sponsored by the Caine College of the Arts Visiting Artists and Scholars Series, Utah Water Research Lab and the Center for Women and Gender at USU.

The opera is free and open to the public. For more information, contact the CCA Box Office in room L101 of the Chase Fine Arts Center on USU’s campus, call 435-797-8022 or see the college’s website.

USU Caine College of the Arts