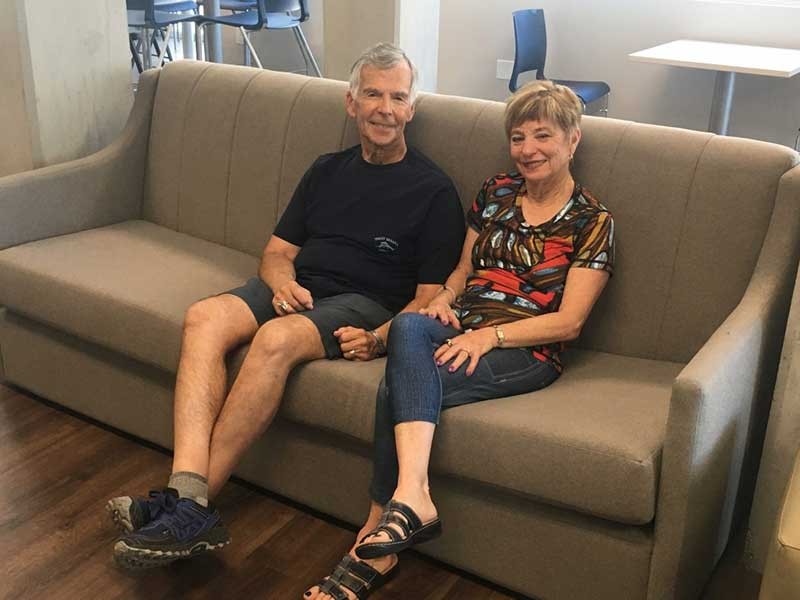 The Logan Summer Citizens program is as unique as its participants. No two summer citizens share the same experiences or even the same background.

An accent enters in on their first hellos, and it is quite apparent Judie Shyman and her husband Ed Melnick are from anywhere but Utah.

One sentence of conversation with this summer citizen couple has everyone wondering:
Where did they come from, and why did they choose Logan as their ultimate summer destination?

Shyman and Melnick grew up in Brooklyn, New York, and lived on Long Island where she was involved in travel training employee services and community relations for a large government contractor.

Meanwhile, Melnick served as a school administrator, known as the top person in his line of work in New York City, specializing in special education.

While Antarctica reminded Melnick and Shyman of “an old science fiction movie on another planet”, the country that surprised the couple most was Ethiopia.

“We figured it would be an interesting country to visit. We didn’t realize the biblical history that Ethiopia presented, and the people were really nice. They love the American people.” Melnick said.

Their love of travel stems from their appreciation of the United States and all that they have been given from their lives.

“We wish more people could travel so they could appreciate the United States. We are so lucky to live in this country,” Melnick said. “Fortunate enough for Judie and I, we love spending time together. We like being active and doing all these things together.”

When the time came to search for a place they could retire outside of New York, they set off on their own little U.S. adventure to find their ideal retirement destination.

They knew their search criteria for their new city involved plenty of activity, a good temperature that wasn’t too hot or too cold and a college town.

In Tucson, Arizona, they found just that.

“We weren’t planning on retiring there, we were actually just visiting, but we saw that it looked like a great place to live,” Shyman said. “I just felt comfortable that it just felt right going by gut feeling.”

With plenty of swimming pools, tennis courts and the University of Arizona nearby to keep them busy, Shyman and Melnick remain happy and healthy with their Arizona lifestyle during the fall, winter and spring months.

“I didn’t think I would become so enwrapped in it,” Melnick said.

The summer heat of Arizona took them on an adventure to find a destination that offered plenty of activity but wasn’t as hot as Tucson.

About a decade ago, Melnick and Shyman were visiting Colorado during the summer while some of their friends had come to Logan.

Shyman is a highly-ranked, avid triathlete and found that running at 5,300 feet wasn’t necessarily her cup of tea, so they decided it was time to try something different.

Two years ago, Melnick and Shyman came to Logan on a weekend and stayed at a hotel. Their friends were involved in the Summer Citizens program, which is a program where seniors living in hot weather climates can escape the summer heat from May to August.

After their friends showed them around Logan and gave them a feel of the city, they decided it was their other perfect fit.

This is now their second year being involved in the Summer Citizens program. The program offers anything from university classes to outdoor recreational activities, as well as arts and theatre performances.

In addition to the many university experiences available, there are also activities provided by different apartments that house summer citizens.

Millennial Towers, where Shyman and Melnick reside for the summer, has its own calendar of activities provided if residents choose to get involved.

Along with being ambassadors of the Summer Citizens program, Shyman makes sure their calendar is always full of activity.

“We just plunged in for three months last year and didn’t think about it,” Shyman said.
Melnick has had many experiences here, but he has found that the people are the reason he enjoys spending his summers in Logan.

“We really didn’t think we would like it as much as we do. The attitudes of the people who live in Logan are so friendly, kind, courteous and so accepting,” Melnick said. “Even when we’re biking, most people pull over to give us space, but here, they pull over as far as they can go. It’s just such courteousness and respect and it’s really nice.”

Although Melnick and Shyman are newcomers to the Summer Citizens program, there are many things that they have found that keep them coming back.

Last year, they got involved in the Lecture Series, and have been to many shows at the local theaters in the area. They have also attended several talks by different people, including Michael Ballam, a professor in the Caine College of the Arts at USU.

“Quite honestly, coming from the New York area, we expected the shows to be a lower quality, and they really weren’t. It shocked us. And this year we signed up for everything. Even the smaller theaters are excellent,” Melnick said.

Linda and Rod Bechky, friends of Shyman and Melnick, have lived in the same retirement community for the past 20 years.

Whether it happens to be participating in bridge, dinner, the theater or happy hours, the Bechkys have found plenty of enjoyment in the company of Shyman and Melnick.

The Bechkys’ describe Melnick and Shyman to be personable, friendly and fun to be with.

“They are extremely active and involved,” Linda Bechky said.

Melnick and Shyman have found several hidden treasures in Logan that they wouldn’t have found elsewhere.

“A lot of it has to do with memories,” Melnick said. “When we go to the west side of Main Street and find farm animals, that’s totally new to us, and we would look around with the mountains in the background and say, ‘This is beautiful. This is incredible.’”

Shyman has found a lot of treasure in the people she has met here.

“We have been able to make a lot of new friends we would not have outside of our own community. We’ve been able to expand our horizons that way,” Shyman said.

Another treasure they’ve found is the beauty of Utah State University.

“We did not know what to expect, but we realized how nice it is. We love Logan and we feel a part of it. We even root for your sports teams,” Melnick said. “This is our second home.”

For others who might visit Logan or participate in the Summer Citizens program in the future, Melnick and Shyman recommend getting involved, and expanding horizons beyond their usual comfort level.

“I would say to explore all the opportunities that Logan has to offer. Take classes, take a walk around the university to see how beautiful it is, and talk to people,” Melnick said.

Shyman’s attitude is to “take advantage of everything”.

Although Logan isn’t quite Mongolia or Antarctica to Shyman and Melnick, spending summers in Logan is about “finding respite” even in their busy lifestyle.

“Coming to Logan is finding the normal way of life,” Melnick said.