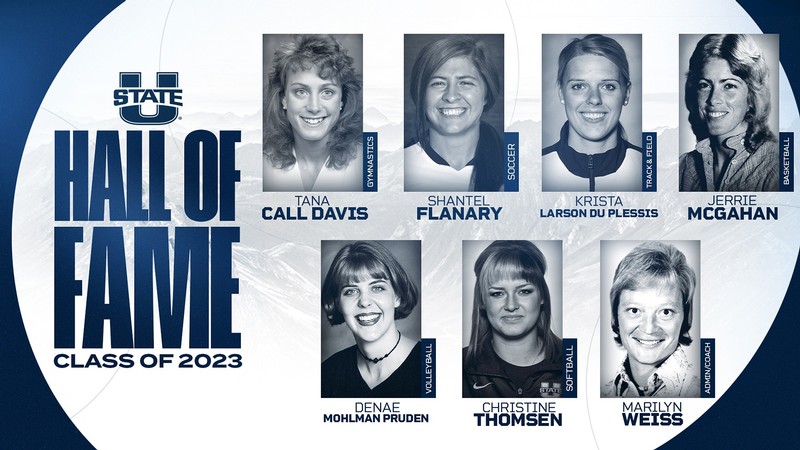 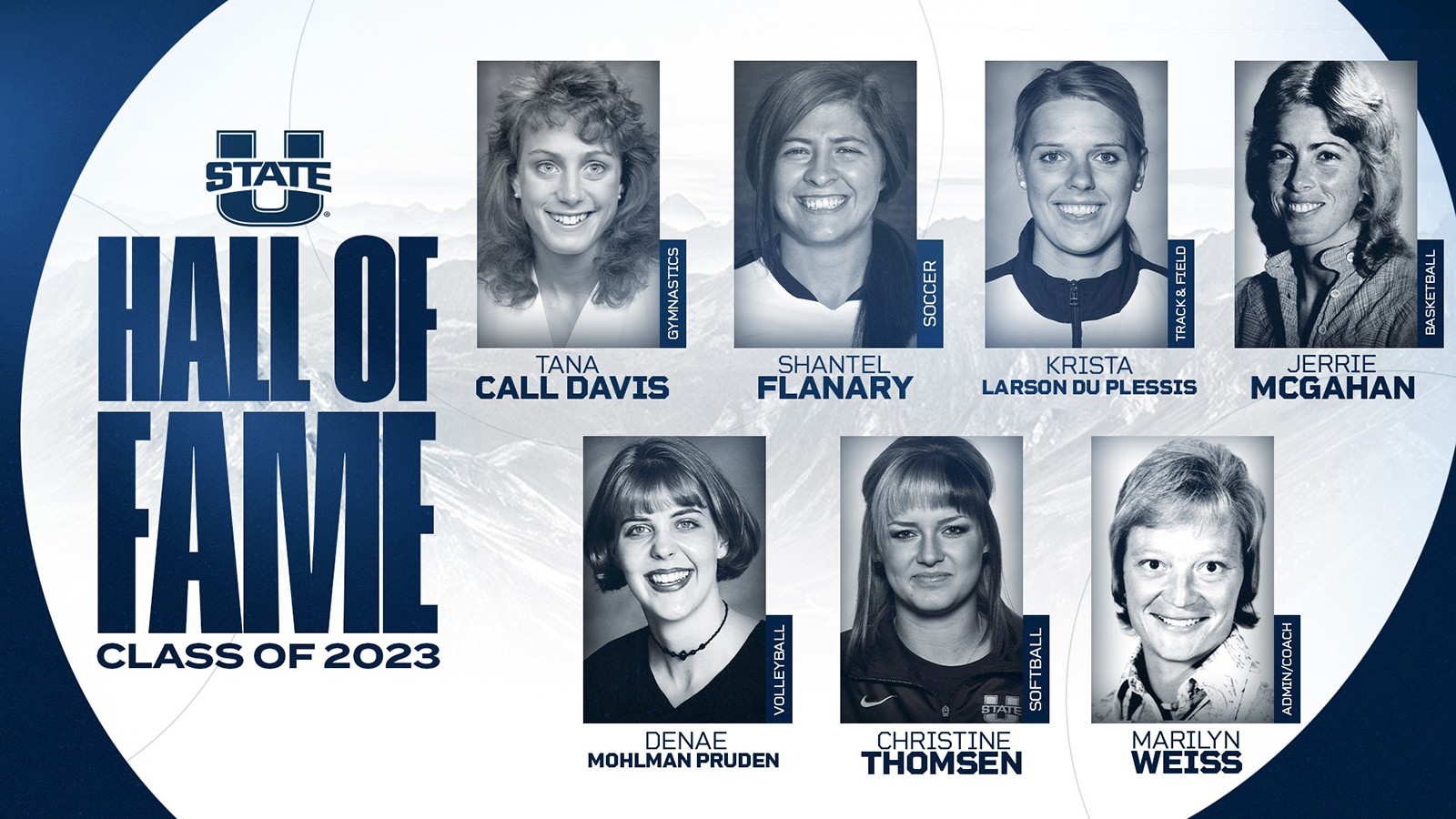 LOGAN, Utah — In conjunction with the 50th anniversary of Title IX, which unlocked access to educational and athletic opportunities for women, Utah State Athletics announced Wednesday its 2023 Hall of Fame Class that consists of seven former female student-athletes and administrators that paved the way for future Aggies.

The induction ceremony for the Hall of Fame's 20th class is scheduled for 7 p.m., on Saturday, April 15, 2023, at the Russell/Wanlass Performance Hall on USU's campus. More information on the event can be found here. Tickets to attend the ceremony can be purchased here.

In addition to the Hall of Fame Event, 'A Celebration of Women in Sport with Utah State Athletics,' will be held on Friday, April 14, at the Riverwoods Conference Center. The gala will take place to honor 50 years of female student-athletes competing at USU. It will feature keynote speakers, live panels and will aim to raise funds for all Aggie female student-athletes. More information on this event will be released soon.

The seven inductees into the 2023 class include: Tana Call Davis, one of the most accomplished gymnasts in school history who held 16 school records at one time; Shantel Flanary, a two-time Western Athletic Conference Offensive Player of the Year in soccer; Krista Larson Du Plessis (Do-Pless-Is), an All-American track & field athlete; Jerrie McGahan, one of the best all-around women's basketball players and first 1,000-point scorer in school history; Denae Mohlman Pruden, a three-time first-team all-conference volleyball player; Christine Thomsen, one of just seven softball All-Americans in school history; and Marilyn Weiss (We-ss), who served as Utah State's Director of Women's Athletics from 1975-1981, as the Aggies won three national championships under her leadership.

"We are excited to celebrate and memorialize the successes of this group of inductees," said USU Interim Director of Athletics Jerry Bovee. "These women are pioneers and role models, and they have helped pave the way for the opportunities afforded our current student-athletes. We salute and honor the legacy these women have left at Utah State and beyond."

Located inside the Steve Mothersell Hall of Honor, the Utah State Athletics Hall of Fame gives fans the opportunity to view biographical information and watch videos on each of the inducted members. Both the Hall of Fame and Hall of Honor are located inside the Jim and Carol Laub Athletics-Academics Complex in the north end zone of Maverik Stadium.

Tana Call Davis, one of the most accomplished gymnasts in Utah State history, held 16 school records at the conclusion of her illustrious career. Call Davis was an at-large competitor in the all-around at the 1989 and 1990 NCAA Championships, placing 26th and 31st, respectively. Overall, she helped lead the Aggies to regional appearances from 1987-90. During her senior season, Call Davis led Utah State to a then-school-record score of 192.600 in a home meet against New Mexico. At the conclusion of her career, Call Davis held the single-meet records for best all-around, bars, beam and floor scores, and set school records for the top season average in the all-around, beam, floor and National Qualifying Score. She also set the school record for top career average in the all-around, vault, bars and beam. Call Davis was also a team captain her senior season, as voted on by her teammates.

Shantel Flanary was a two-time Western Athletic Conference Offensive Player of the Year and is the school record holder with 85 career points, which includes 34 goals and 17 assists. Over the course of her career, Flanary was named first-team all-WAC three times and second-team all-WAC once and was the 2008 WAC Freshman of the Year. During her junior and senior campaigns, Flanary was the top-ranked player in the WAC and one of the top 100 players in the country by Top Drawer Soccer. As a senior in 2011, she helped USU win the WAC regular season and tournament championships and the school's first-ever appearance in the NCAA Tournament. For her career, Flanary ranks first all-time in school history in shots on goal (113), second in career shots (215) and game-winning goals (10), third in career goals (34) and fourth in career assists (17). Flanary also turned in three of the top single-season scoring marks in USU history, logging 10 goals in both 2008 and 2011 to rank seventh, and nine goals in 2010 to rank 10th. Flanary also has two of the top assist seasons in USU history, recording six in both 2010 and 2011, to rank tied for seventh. Flanary's 26 points in 2011 rank fifth in school history, while her 24 points in 2010 rank eighth. Flanary is among the all-time leaders in single-season shots on goal, tallying 38 in 2010 to rank second, and 29 in both 2009 and 2011, to rank seventh. Flanary's four game-winning goals in 2011 rank second all-time in school history. Flanary led Utah State in goals twice, logging 10 during the 2009 and 2011 campaigns. She also led the Aggies in assists with three during the 2009 season and six during the 2010 season. Flanary finished as the team leader in points during the 2009 season with 23 and again in 2011 with 29. She led the Aggies in shots on goal for three-consecutive years from 2009-11. Flanary is also one of only nine players in school history to record a hat trick.

Krista Larson Du Plessis (Do-Pless-Is) earned All-American honors as a senior by finishing ninth in the hammer throw at the 2009 NCAA Outdoor Track & Field Championships in Fayetteville, Arkansas. After earning an at-large bid to the championships and entering the national meet ranked 16th, Larson Du Plessis placed 12th in the qualifying round with a toss of 57.33 meters (188-1) and ninth overall and eighth among American finishers in the finals with a mark of 58.21 meters (194-3) to earn All-American honors. During her time at Utah State, Larson Du Plessis was a two-time all-Western Athletic Conference honoree. She was also a four-time academic all-WAC selection and earned academic All-America accolades. Overall, Larson Du Plessis was the first female hammer thrower at Utah State to earn All-American honors. She currently ranks fourth all-time in school history in the hammer with a mark of 59.95 meters (196-8), which she set as a senior. Indoor-wise, she ranks fifth all-time in the weight throw with a heave of 18.09 meters (59-4), also set in 2009.

Jerrie McGahan is the program's all-time leading rebounder, tallying 840 boards in her career, and is the school-record holder with 553 made field goals over 94 games. McGahan also set the school record for career points with 1,317, a mark that stood for 33 years and is now the third-best in school history. For her career, she averaged 14.8 points and 9.4 rebounds per game, which is the fifth- and second-best averages in school history. She also ranks fourth all-time in school history in field goal attempts (1,182), eighth all-time in field goal percentage (46.8) and ninth all-time in free throws made (211). During her senior season, she averaged 18.1 points and 9.5 rebounds per game, which rank as the sixth- and 10th-best single-season marks in school history. For her career, she scored 30 or more points three times, including a career-high 31 points twice, which is tied for the 27th-most in a single game in school history. She also had seven career games where she grabbed at least 15 rebounds, including a career-high 21 against UTEP in 1978, a number that still ranks as the fifth-most in school history. Overall, she is one of just 13 players in program history to score 30 or more points in a game and one of 17 players to record at least 15 rebounds in a game. Along with basketball, McGahan also competed on the USU track & field team.

Denae Mohlman Pruden was a three-time all-Big West Conference selection for Utah State and is one of just two players in school history to earn first-team all-conference honors three times. Mohlman Pruden, who was named the Big West Freshman of the Year in 1997, was also a three-time academic all-conference selection and earned academic all-district honors as a senior. During her senior season, she helped Utah State to its first-ever NCAA Tournament as the Aggies advanced to the second round and finished the year ranked 22nd in the nation. Mohlman Pruden still ranks first all-time in school history with a .348 career hitting percentage, and she still holds the top three spots for hitting percentage in a season as she hit .375 as a freshman, .353 as a senior and .343 as a junior. Along with being the school record holder in hitting percentage, Mohlman Pruden ranks second all-time at Utah State in total blocks (477) and block assists (420), tied for fourth in matches played (121), sixth in kills (1,294) and eighth in total attempts (2,796). Additionally, Mohlman Pruden is tied for seventh in single-season blocks (148) twice, tied for eighth in block assists (136) and tied for 10th in block solos (21), along with ranking seventh with a .302 hitting percentage during her sophomore campaign. She also set one match record during her career as she recorded 11 blocks as a senior, which is tied for the most in a three-set match in school history.

Christine Thomsen is one of just seven softball players in school history to earn All-America accolades as she was named an Easton second-team All-American in 2012. The standout slugger was also one of the hardest batters to strike out in the nation that season, as she posted a 0.13-strikeout rate per game. Thomsen was named first-team all-Western Athletic Conference in both of her years at Utah State. She also earned academic all-conference honors as a senior and was a two-time WAC Player of the Week. Thomsen still holds the program record with a .431 career batting average and ranks fourth all-time with a .585 slugging percentage. During her two years at Utah State, she hit .425 as a senior and .418 as a junior, marks that still rank second and third, respectively, in school history. She also posted 66 hits, including 14 doubles, and 97 total bases as a junior, marks that still rank tied for third, tied for sixth and ninth in school history, respectively.

Marilyn Weiss (We-ss) served as Utah State's Director of Women's Athletics from 1975 to 1981. During that time, she also served as USU's women's basketball coach, USU's volleyball coach and its women's track coach. As Utah State's Director of Women's Athletics, Weiss oversaw six programs (basketball, gymnastics, softball, volleyball, and track & field/cross country). In 1976, she hired Mary Jo Peppler and Marilyn McReavy as co-head coaches of the volleyball program, and then hired Ray Corn and John Horan as head coaches for the gymnastics and softball programs, respectively, the following year. Shortly thereafter, the volleyball program won the AIAW National Championship in 1978 and finished as the national runner-up in 1979, while the softball program won back-to-back AIAW National Championships in 1980 and 1981, under the direction of first-year head coach Kelly Phipps (1980) and Lloydene Searle (1981), both of whom were hired by Weiss. Searle spent 17 years as USU's head coach and led the Aggies to five conference championships and to the Women's College World Series five times. Furthermore, the gymnastics program went from club status to a nationally ranked program during Corn's 31 years as he led the Aggies to the postseason 26 times, including five trips to the national championships. Another significant hire for Weiss was Lyle Knudson as head coach of the women's track & field/ cross country programs in 1977. Knudson, who was recognized as a top-level national coach for many Olympic athletes, was instrumental in bringing regional and national recognition to the program. Following her time at Utah State, Weiss continued to impact women's collegiate athletics at the University of Florida, before forming a successful sporting goods sales agency in Texas for 35 years. 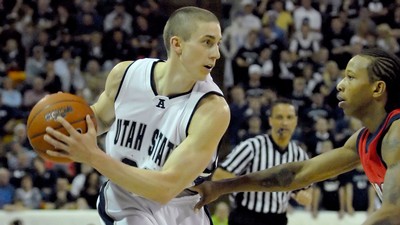