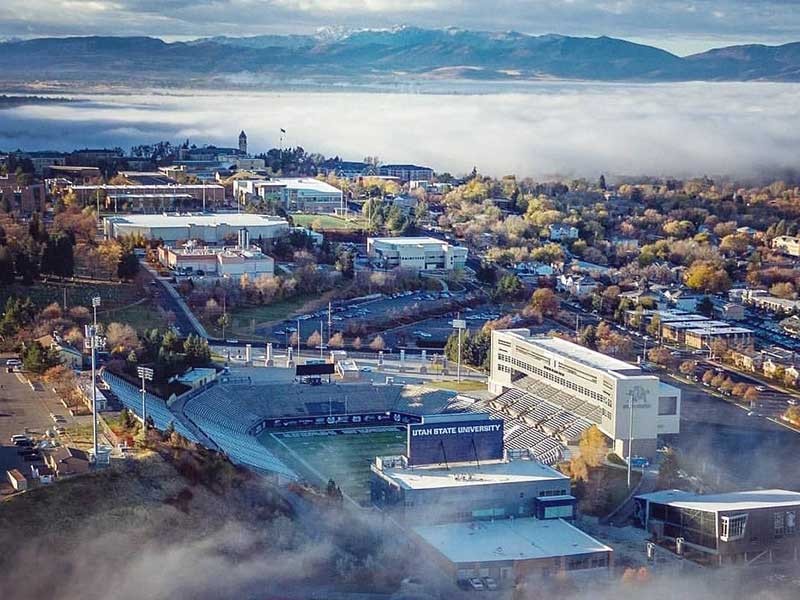 Download
Close Download
Utah State Athletics continues to excel on and off the fields of competition, and the 2018-19 academic year was no exception. In fact, this past year was one of the most successful in school history, especially with the accomplishments of its football and men's basketball programs.

Academically, Utah State's nearly 400 student-athletes have a combined 3.24 grade point average and a 92 percent graduation success rate, which leads the Mountain West. During the 2018-19 academic year, USU recognized 206 student-athletes for earning a 3.2 or better GPA, while 66 student-athletes will participate in Utah State's 132nd undergraduate commencement this weekend and receive their degrees.

Athletically, Utah State's men's basketball program won its first-ever Mountain West regular season title and tournament championship after entering the season picked ninth in the preseason polls. Additionally, its football program was picked to finish fourth in the Mountain Division of the Mountain West, but posted a 7-1 league mark to tie for first in the division.

Collectively, Utah State produced a combined 39-9 record between football (11-2) and men's basketball (28-7) this past year, which is a single-season school record. That 39-9 mark is tied for the fourth-best winning percentage and seventh-most wins nationally. The previous school record was a combined 34-12 mark during the 2010-11 academic year.

Furthermore, the 2018-19 academic year marked the first time in school history that Utah State won 10-plus games in football and 25-plus games in basketball. The Aggie football team finished with a school-record-tying 11-2 record and was ranked 21st in the final Coaches Poll and 22nd in the final Associated Press poll. Men's basketball finished with a 28-7 record, which is tied for its third-most wins in school history, and was ranked 25th in the nation in both the AP and Coaches poll going into the NCAA Tournament.

Overall, Utah State was one of just five schools in the nation to finish the football season and enter the NCAA Tournament nationally ranked, along with Cincinnati, LSU, Kentucky and Michigan.

In all, Utah State was one of just two schools in the nation this season, along with Cincinnati, to win 11-plus games in football and 25-plus games in men's basketball.

The 2018-19 academic year also marked just the third time in school history that Utah State's football team played in a bowl game and its men's basketball team advanced to the NCAA Tournament, also doing so during the 1961-62 and 1997-98 academic years.

Across the nation, Utah State was one of 29 schools to participate in both a bowl game and the NCAA Tournament this year. Furthermore, Utah State's No. 8 seed in the NCAA Men's Basketball Tournament was its highest in school history.

And finally, Utah State's head football coach (Matt Wells) and head men's basketball coach (Craig Smith) were both named the Mountain West Coach of the Year, marking just the second time in school history that has been accomplished, along with the 1997-98 academic year when USU was a member of the Big West Conference. Furthermore, Smith's 28 wins were the most in the nation this season by a first-year head coach, not to mention a school record.