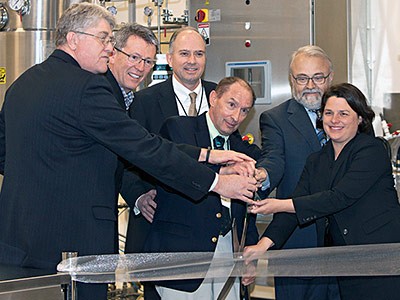 During an event held Feb. 5 at Utah State University’s newly constructed Bioproducts Scale-Up Facility on the university’s Innovation Campus, officials announced that the new facility will enable synthetic spider silk to be produced in commercial quantities. Funding for the facility was provided by the Utah Science Technology and Research (USTAR) initiative.

“Within this new, state-of-the-art facility, Utah State will begin the process of producing synthetic spider silk and other biosynthetic materials in quantities that have not yet been achieved, which will enable commercial partners to take advantage of years of USU faculty research on new biomaterials that can be used for a wide variety of applications,” said H. Scott Hinton, director of the USTAR Synthetic Biomanufacturing Institute at Utah State. “This new USTAR Bioproducts Scale-Up Facility can provide large quantities of these new biosynthetic materials to companies for innovative bioproducts that range from medical devices to textiles.”

In addition to manufacturing large quantities of bioproducts for commercialization, the USTAR Bioproducts Scale-Up Facility has been designed to enable the optimization of upstream and downstream processes to enhance the production of bioproducts, including synthetic spider silk, produced by fermentation.

“Spider silk has long been known to contain properties that make it an incredibly strong material with potential applications in many different industries,” said USTAR Professor Randy Lewis. “The production of mass quantities of spider silk has been limited by the process in which we can harvest it.”

Stronger than Kevlar and more elastic than nylon, spider silk, until now, could only be produced in limited quantities. The USTAR Bioproducts Scale-Up Facility at Utah State enables scientists to produce synthetic spider silk, and other synthetic bioproducts, in quantities that will be useful for the production of real-world products.

Lewis has been at the forefront of researching spider silk, an ancient biomaterial for the future. He is considered one of the leading experts on the production of synthetic spider silk for potential uses such as ligament and tendon repair, advanced coatings, high-tech clothing, parachutes, bioadhesives, time release coatings and gels and airbags, to name a few.

For large-scale fermentations, the facility houses two 500-liter fermenters, which have a variety of setup options and data collection resources that allow process optimization. A 125-liter fermentation system, which is also fully automated and sterilizable-in-place, is available to serve as a seed reactor. For cell and product recovery, several sizes of centrifuges are available. In addition, a chromatography system makes it possible to purify production quantities of spider silk proteins.

“The capabilities of this fermentation facility enable scale-up of fermentation bioproducts that can be grown and analyzed under a variety of growth conditions for maximum product yield and quality with the room for growth necessary to add additional equipment as demand increases,” said Hinton. “The facility is an incredible addition to the USTAR Synthetic Biomanufacturing Institute and was designed to provide the flexibility to create and produce many new and exciting bioproducts that have been invented and developed here at USU.” 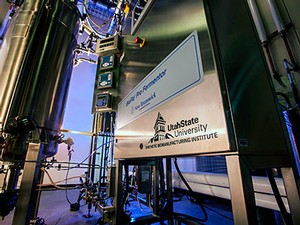 State of the art fermenters within the USTAR Bioproducts Scale Up Facility allow scientists to mass produce spider silk and other bioproducts. 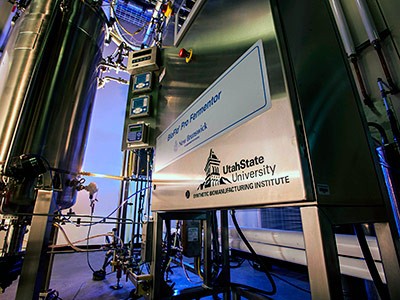 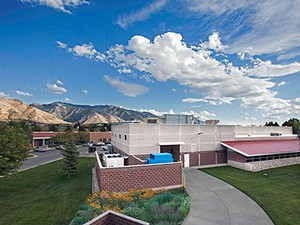 The USTAR Bioproducts Scale Up Facility at USU was designed and built to facilitate the production of spider silk and other bioproducts in sufficient quantities that enables commercialization of current research into real-world applications. 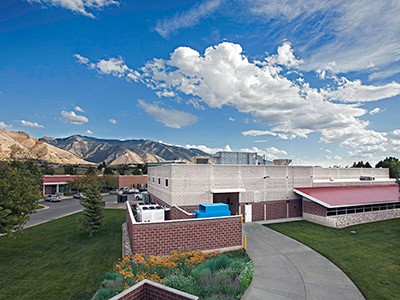 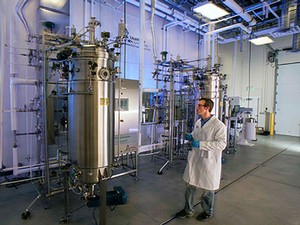 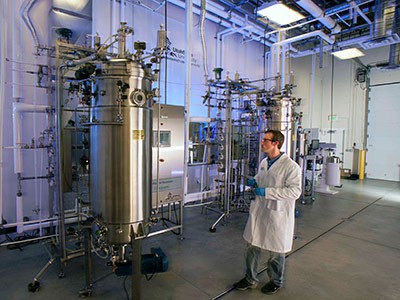