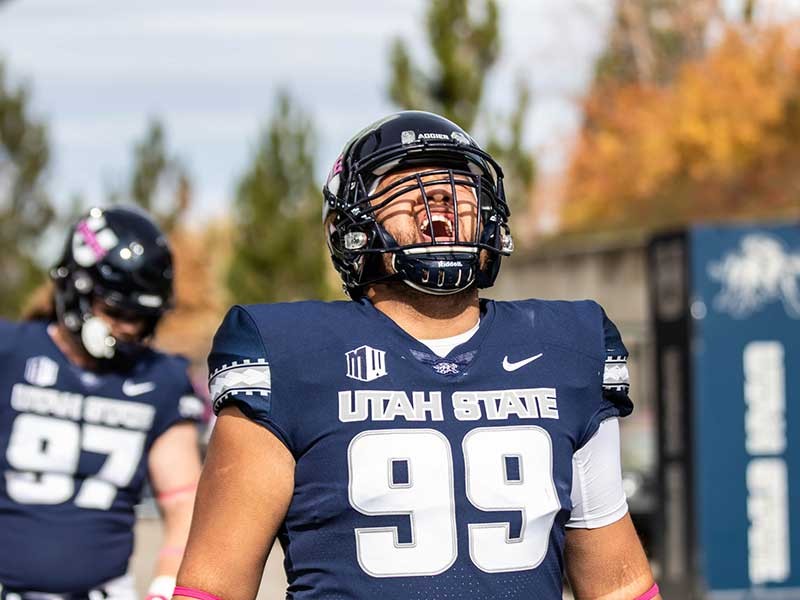 Download
Close Download
Following its 56-17 Mountain West road win at Hawai'i on November 3, Utah State football is ranked No. 14 in the Associated Press (AP) Poll with 586 votes and 16th in the Amway Coaches Poll with 565 votes.

Overall, this is just the fourth Utah State team in school history to be nationally ranked in the AP poll joining the 1960, 1961 and 2012 teams. The 1960 team was ranked 18th and 19th in consecutive weeks, while the 1961 team finished the season ranked 10th and the 2012 team was ranked for four-straight weeks and finished the season 16th. One other Aggie squad has been nationally ranked as the 1978 team started the year with a 5-0 record and was 18th in the country in the United Press International (UPI) poll.

Prior to this season, the last time Utah State received votes in either poll was on Oct. 18, 2015, following its 52-26 home win against then-No. 21 Boise State, as it received seven votes in the AP poll to rank 36th and five votes in the Coaches poll to rank tied for 34th.

Utah State (8-1, 5-0 MW) is off to its best start to a season since the 1963 team also won eight of its first nine games. USU is also 5-0 in Mountain West play for the first time in its six years in the league. The last time USU had a better conference start was in 2012 when that team posted a perfect 6-0 mark in its last year in the Western Athletic Conference.  Overall, it is the fourth time in the last seven seasons and just the 13th time in 121 seasons of Aggie football that USU has won at least eight games.

On the season, Utah State is one of just 15 teams in the nation with one or fewer losses and one of 10 teams that has not lost a conference game.

Utah State's current eight-game winning streak is tied for the fifth-longest active winning streak in the nation and the second-longest in school history as the 1960 team holds the school record with nine-straight wins.

Utah State ranks among the top 40 teams in the nation in 32 different statistical categories, including ranking second in scoring offense (50.1 points per game), tied for first in non-offensive touchdowns (8), tied for third in defensive touchdowns (4), second in turnovers forced (23), second in kickoff returns (30.2 yards per return), tied for fifth in winning percentage (.889) and eighth in sacks allowed (0.89 per game). USU also ranks second in the nation with 19 scoring drives on the season of less than 60 seconds and leads the nation in defensive three-and-outs at 6.38 per game.

Utah State continues Mountain West play this weekend as it hosts San José State (1-8, 1-4 MW) on Saturday, Nov. 10, at 2 p.m. The game will be aired exclusively on Facebook. Overall, USU has won seven of its last eight Mountain West games dating back to last season and has won five-straight at home. Prior to the game, USU will honor its 25 seniors in a pregame ceremony.