Steven D. Aust, a professor in the chemistry and biochemistry department at Utah State University, received the 2004 Kenneth A. Spencer Award for achievement in agricultural and food chemistry.
“Dr. Aust’s research credentials are world-class, providing the chemistry department with outstanding visibility and stature,” said Steve Scheiner, department head and professor of chemistry and biochemistry at Utah State. “His presence plays a role in attracting highly qualified faculty as well as students, and his research accomplishments furnish a role model for all of us to emulate.”
The American Chemical Society presents the Spencer Award to individuals who have made commendable contributions to agricultural and food chemistry. It is given to further progress in agricultural and food chemistry by encouraging research, education and industry. Aust was selected to receive the award by a 12-member jury.
“I was amazed but humbled upon learning that I had received the Spencer Award,” Aust said. “I am most thankful to all my mentors and the students, postdoctoral students and others who have done the work.”
Aust moved to Utah in 1987 as the director of Utah State’s Center of Excellence in Biotechnology and has been a professor of chemistry and biochemistry at Utah State for 18 years.
“Dr. Aust plays a large role in this department as the senior member of the biochemist group, he provides a solid anchor for that branch of endeavor,” said Scheiner.
Aust’s interests and research focus on the role of iron in oxidative stress and biodegration of environmental pollutants.
“Generally I am drawn to these research subjects because I feel we can make a significant contribution towards understanding them and either capitalizing on their attributes or mitigating their adversities,” said Aust.
Aust is an internationally recognized expert on the role of iron in the harmful oxidation of biomolecules, the nature, effects and detection of polyhalogenated aromatic hydrocarbons, lipid peroxidation, and the use of white-rot fungi to break down lignin and harmful substances such as pesticides, poisons and explosives, Scheiner said.
Aust has published more than 300 articles in peer-review journals, 20 invited review articles, 60 conference proceedings articles, contributed to 10 handbooks and has been cited in more than 4,000 papers.
“My respect for Dr. Aust runs high,” said Scheiner. “He is a credit to this university and to his field.”
Aust received his bachelor’s and master’s degrees in agriculture from Washington State University and received his doctorate in dairy science from the University of Illinois. He did postdoctoral research at the Karolinska Institute in Sweden before becoming a professor of biochemistry and director of a research center at Michigan State University.
He has received other honors including the DuPont Science and Engineering award in 1988, fellowships in the Academy of Toxicology Sciences in 1992 and The Oxygen Society in 1994, as well as receiving an Alumni Achievement Award from Washington State University in 1997, the Governor’s Medal for Science and Technology in 2002, and both the D. Wynne Thorne Researcher of the Year award and the University Outstanding Graduate Mentor Award in 2003. He has been a mentor for 18 master’s students, 34 doctoral students and 16 postdoctoral students.
“The Spencer Award was first given in 1955 and rededicated in 1966 to Kenneth A. Spencer, a man of vision, ideals and deep humility who constructively and progressively built his dreams into reality for the betterment of his fellow man,” said Eckhard W. Hellmuth, professor in the department of chemistry at the University of Missouri-Kansas City.
Aust will accept the award at the Spencer Award Banquet in Kansas City in February. 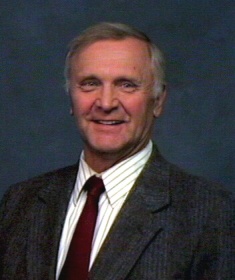 Steven D. Aust is the recipient of the Spencer Award