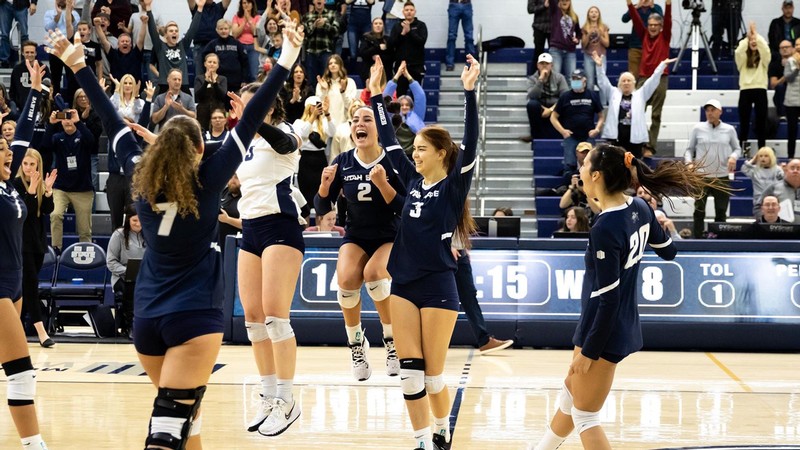 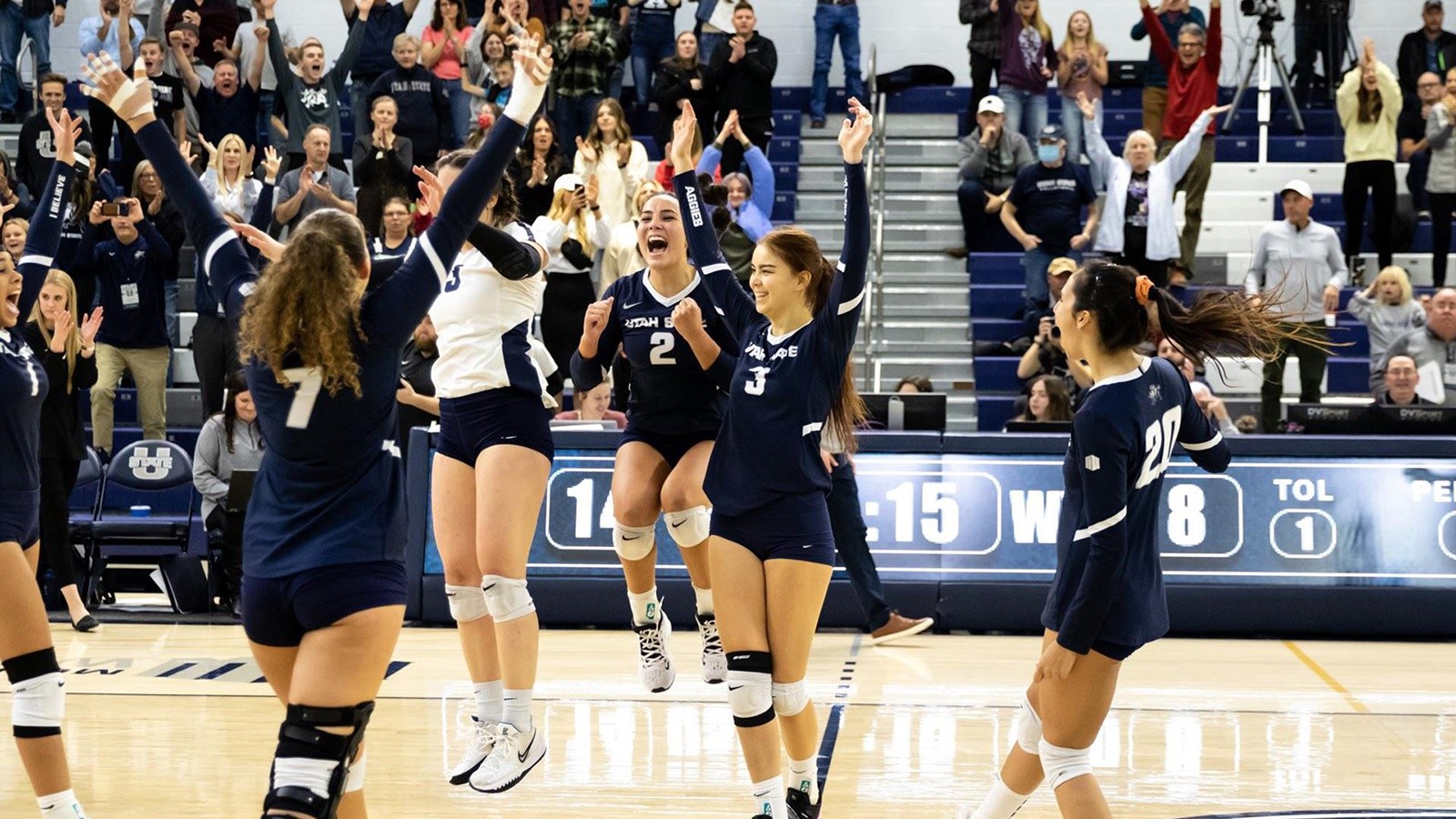 On Senior Day and with a Mountain West regular season championship on the line, Utah State volleyball met the challenge, rallying to defeat Wyoming in an epic five-set match.

"It's indescribable," senior Corinne Larsen said. "Had you come to me three years ago and said, 'You're going to be MW champs your senior year,'" I would've laughed. Where we were at as a team, what we've gone through and what we've climbed through is unbelievable, and I never would've guessed in the whole world it would happen. But, I had no doubt this season. As I saw this team play and work together, there was no doubt in my mind that we would come out on top."

Doubts could have been excused following the first set, however, as the teams exchanged runs throughout the set, meeting at a dead heat at 24-apiece. A Cowgirl kill and service ace gave the first set to the visitors.

"I think we exerted a lot on Thursday," Larsen said. "So, we took a little deep breath, too much of one, and thought we could relax a bit. It was more, we were shaken up and then we just sat on the bench and said 'Okay listen, it's going to be a battle.' They came to play. Obviously, this is their last match, too. We just had to regroup and remember our basic training and get back to it."

The Aggies battled through the emotions to build a 14-8 lead at the start of the second set. The Cowgirls again responded, utilizing a 10-5 stretch to shrink the margin to a single point. Facing the possibility of going down 0-2, USU's seniors answered the call.

Senior Kristy Frank killed an assist from junior Kalena Vaivai to swing momentum back in the Aggies' favor. Larsen then scored the final three points of the set off a kill and two service aces, the last of which barely trickled over the net to give USU the 25-22 win and squaring the match at one-apiece.

"They're so great," USU head coach Rob Neilson said of Frank and Larsen. "They've learned so much and they know how to prepare for matches. I'm so proud of both of them for how much they've improved. They've contributed enormously to what we've accomplished and what we're hoping to accomplish."

USU looked to take control of the match in the third set, slowly building a 15-12 advantage at the media timeout. A 7-2 run by Wyoming signaled another closely-fought set as the Cowgirls retook the lead. The sides alternated points until a 4-0 Cowgirl run tipped the set into Wyoming's favor, 25-22.

"In any sport, you can play to win or you can play not to lose," Neilson said. "There are those moments where we'd find our groove and we'd see ourselves up and then (Wyoming) would score a point and then it's, 'Okay, we don't want to lose this lead.' So, things get a little bit slower, not quite as fast, not quite as aggressive. It just trickles through into lots of different areas. Maybe that's the most important part. Winning a championship is great, but the character to battle through those emotions, that's going to teach us lessons for a long time going forward."

Facing an elimination set, the Aggies greeted the danger with two 3-0 spurts early in the fourth set to take an 11-7 lead. Utah State held at least a two-point separation until a 4-1 burst from Wyoming tightened the deficit to a single point. Sophomore Tatum Stall and junior Kylee Stokes answered with two straight kills to clinch the set, 25-22, and force a decisive third set.

Stokes finished with 13 kills while hitting .308 for the match. Stall ended the match with a team-high 19 kills with a .314 hitting percentage, also adding 12 digs for her ninth double-double this season.

"Stall texted me after the Colorado State match and was feeling a little bad she didn't have as many kills," Neilson said. "We just talked about all the little things that she did in the Colorado State match to help us win. She had a little bit of a chip on her shoulder. She wanted to go kill some balls and it was awesome to have her carry a big load for us. She was the star of the match."

"The crowd getting into it was amazing," Neilson said. "Maybe after 18 points in the fourth set, the crowd got into it a little bit and I felt like that freed us up. As soon as that happens, we can play volleyball well in so many different ways and put pressure on teams in so many different ways. We're at our best when our backs are against the wall. That's what the fourth and fifth set was, and I'm just proud of our perseverance and the character of this squad."

Freshman Beatriz Rodrigues and Vaivai directed the Utah State offense to the tune of 29 and 27 assists, respectively. Vaivai added another 13 digs, her sixth double-double on the year. Frank added 11 digs of her own alongside nine kills. Sophomore Abby Peterson ended with a team-high 19 digs. Larsen finished with 10 kills and tied for the team lead with Mehtola with four total blocks. As a team, the Aggies had 10 service aces, their second-most in a match this season. Larsen led the way with four aces, followed by Vaivai with three.

"Could not ask for a better Senior Day," Larsen said. "That is exactly how we wanted it to turn out and I'm so so grateful for how it did."

With the win, the Aggies also claimed a first-round bye in next week's Mountain West Tournament in Las Vegas, Nevada. Utah State will face their semifinal opponent on Thanksgiving Day.

"We play Thursday then Friday," Neilson said. "Thanksgiving in Vegas. You think about how grateful for the things you want to be able to do. The chance to go play for a championship in the sport you've dedicated yourself to is an unbelievable opportunity. We're chomping at the bit to go take advantage of it. We're excited and we've been preparing for this moment. That's been the goal for this group: to go win a tournament championship. We've got our eyes set on it, we're getting better and we're peaking at the right time here." 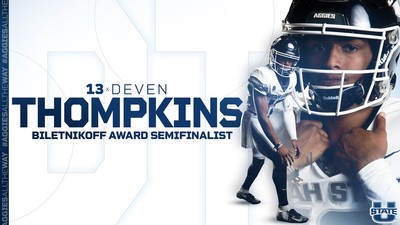 For just the second time in program history, and first since 2017, Utah State's women's cross country team was selected to participate in the NCAA Division I National Championships.