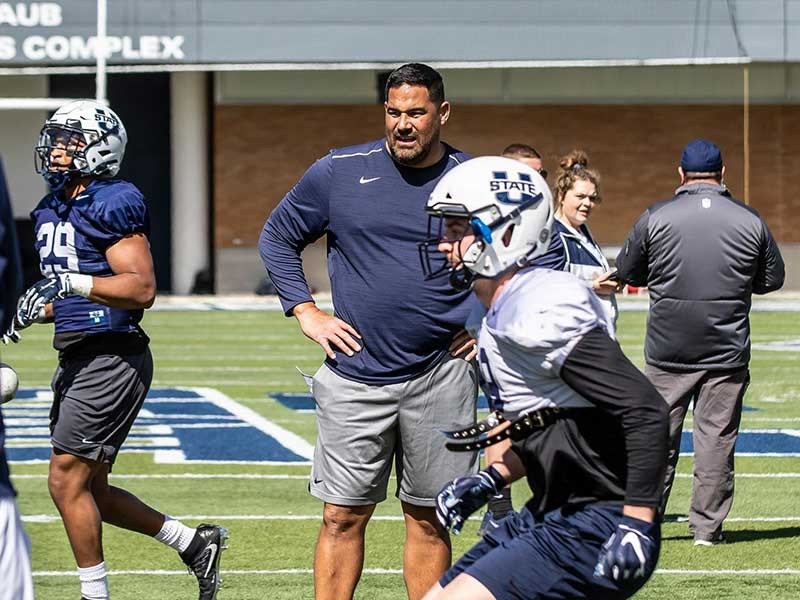 Utah State's football team held its 11th practice of spring camp Tuesday afternoon inside the Stan Laub Indoor Training Center and the Aggie defense is preaching hustle, effort and desire as they continue to build and develop smart and tough players.

Leading Utah State's defense in 2019 is first-year coordinator and inside linebackers coach Justin Ena, who brings 10 years of college coaching experience with him to USU, including five seasons as a defensive coordinator.

"Practice has been nice. The players are really understanding this defense and they have been flying around. We love the pace we are getting from the offense and it is making our guys become quick thinkers. We're looking for smart, tough guys, and I think we've gotten smarter and are starting to get tougher too."

Five of those players returning are all-Mountain West performers as Galeai and Woodward were both named to the second team last season, while Leilua, 'Unga and Williams all earned honorable mention accolades.

Leading Utah State's defense this season will be Woodward, who was named a first-team All-American by ProFootballFocus and a third-team All-American by The Associated Press last season. Woodward started all 12 games he played in 2018 and has appeared in 22 games overall during his two-year Aggie career. For his career, he has 6.0 sacks and 15.5 tackles for loss as part of his 163 total tackles, while adding three interceptions, two forced fumbles, one fumble recovery and nine career double-digit tackle outings, including a career-best 20 stops at Colorado State last season.

Woodward finished his sophomore season by recording 10 tackles and one interception against North Texas in the New Mexico Bowl for his eighth double-digit tackle outing of the year. For the season, Woodward led the team with 134 tackles and ranked 11th nationally with his 11.2 tackles per game average. The native of Olympia High School in Olympia, Wash., also ranked second on the team in both sacks (5.0) and tackles for loss (12.5), while adding two forced fumbles and two interceptions.

"We're really loaded at the defensive line position," added Ena. "When you go all the way across from Tipa to Dalton Baker to Justus Te'i, and then our interior guys, Devon Anderson, Christopher and Fua. We have to make sure we play those guys and get pressure on the quarterbacks."

In the back end, Williams started all 13 games for Utah State last season as he led the team with four interceptions and 11 pass breakups, while adding 1.0 sacks and 3.0 tackles for loss as part of his 42 total tackles. Williams was also named the Defensive MVP of the New Mexico Bowl and was named to the ESPN All-Bowl Team as he had two interceptions against North Texas.

"One of the top things for the linebackers and defensive backs is the zone drops. We've been emphasizing our zone drops and we've done a good job with teaching and relaying that message to our kids and they're starting to get it right now."

Highlighting this group is Ingram, who has started 15 career games and played in 19, and has 11 career pass breakups, to go along with one interception. Haney has played in 37 career games, with 10 starts and has career numbers of 73 tackles and 16 pass breakups. Te'i has made nine career starts and has 28 games played under his belt, as he has 66 career tackles, which includes 5.0 tackles for loss.

Of the players returning who have yet to start a game during their Aggie careers, Meitzenheimer is the most experienced player in that group with 19 games played in his career, while Gunther has appeared in 15 games, Andersen and Grayson have both played in 12 games, and Green has played in 11 games.

"The number one thing for us between now and fall camp is to keep preaching hustle, effort and desire. We need to make sure the guys understand there's no substitution for busting their butt and flying to the ball."

Utah State will hold two more practices this week, including its annual Blue vs. White Spring Game on Saturday, April 13, on Merlin Olsen Field at Maverik Stadium, at noon.