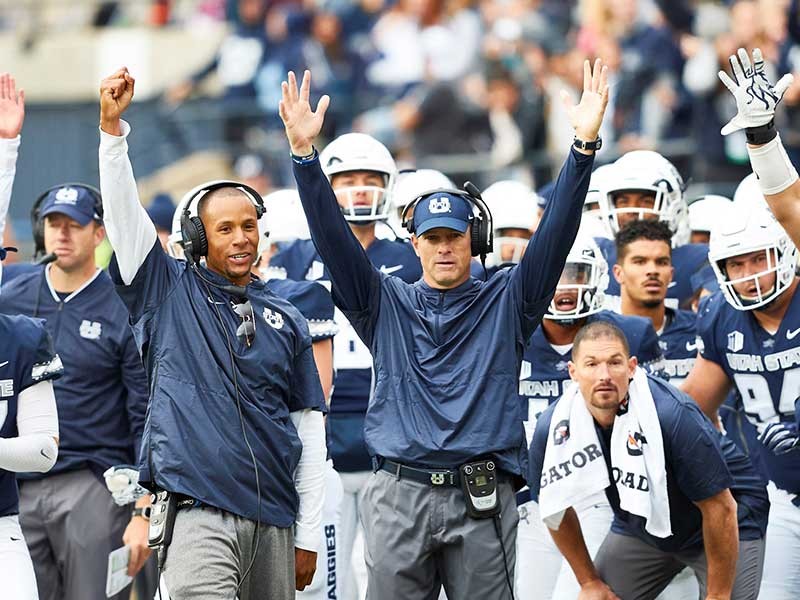 USU Football Coach Matt Wells (center, U State hat) is the fifth coach in conference history to be named the Mountain West Coach of the Year multiple times.

Overall, Utah State's 18 total honorees are tied with the 1997 Big West Conference championship team for the most in school history.

Wells, who was also named the Mountain West Coach of the Year in 2013, is the first coach in school history to earn multiple coach of the year honors. Overall, he is one of just five coaches in school history to be so honored as Bruce Snyder (1978), Chuck Shelton (1991) and John L. Smith (1997) were all recognized by the Big West Conference, while Gary Andersen
earned Western Athletic Conference Coach of the Year accolades in 2012.

Aggies who earned all-conference honors for the second time this season included Andrus, Eberle, Ficklin and Raymond, as Eberle earned first-team all-Mountain West honors in 2017, while Andrus, Ficklin and Raymond were all named to the league’s honorable mention team a year ago.

Ficklin, a 6-foot-2, 300-pound senior offensive center from Mesa, Ariz. (Red Mountain HS/BYU), started all 12 games and had an overall performance grade of 92 percent for the season, which ranked first on the team. During the year, he ranked second on the team in offensive snaps played at 745 and had a team-best 48 knockdowns, which included a season-high 10 against BYU, while not allowing a single sack all season.

Scarver, a 5-11, 185-pound wide receiver from Las Vegas, Nev. (Centennial HS), leads the nation in kickoff returns (34.2 ypr) and is tied for second nationally with his two kickoff returns for touchdowns (0.17 pg). On the season, Scarver has returned 21 kickoffs for 719 yards and has four returns of 50 or more yards on the season.

Andrus, a 6-4, 310-pound senior offensive lineman from El Dorado Hills, Calif. (Oak Ridge HS/Snow JC), started all 12 games, including 10 at left guard and two at left tackle this season, and had an overall performance grade of 91 percent. Overall, he only allowed one sack all season as he played four different positions on the offensive line. During the year, he led the team in offensive snaps played at 750 and had 24 knockdowns, which included a season-high six against San José State.

Galeai, a 6-5, 230-pound redshirt junior linebacker from Euless, Texas (Trinity HS/TCU), started all 12 games and is tied for second in the Mountain West and tied for 27th in the nation in sacks with 8.5 (0.71pg), tied for seventh in the MW in forced fumbles with two (0.17 pg), tied for eighth in the MW in tackles for loss with 11.0 (0.92 pg), and is 47th in the MW in tackles with 58 (4.8 pg). Overall, Galeai ranks first on the team in sacks, second in tackles for loss and fifth in tackles, while tying for the team lead in forced fumbles and ranking tied for third on the team in interceptions. He recorded a career-high 11 tackles against Air Force and returned one of his two interceptions 56 yards for a touchdown against BYU.

Love, who was named the Mountain West Offensive Player of the Week five times in 2018, set the single-season school record for touchdowns passes with 28 and tied the single-game school record with five touchdown passes twice. Against San José State, Love was 32-of-42 passing for a career-high 491 yards and five touchdowns, as those 32 completions are a career high and tied for the second-most in a game in school history. Overall, Love is 246-of-374 (.658) passing for 3,208 yards with 28 touchdowns and just five interceptions and has thrown for at least 300 yards six times this season, and at least four touchdowns passes four times. He has also rushed for six touchdowns on the season to rank third on the team.

Rocquemore, a 6-1, 210-pound senior safety from McKinney, Texas (McKinney HS), started all 12 games this year and is tied for third in the Mountain West and tied for 36th in the nation with three interceptions (0.25 pg), and tied for 30th in the MW with 70 tackles (5.8 pg). On the season, Rocquemore ranks third on the team in both tackles and tackles for loss (8.5) and is tied for third on the team with his two sacks. He is also tied for the team lead with his three interceptions, returning one of them 32 yards for a touchdown at Colorado State. His best game of the year was against Air Force as he recorded a career-high 13 tackles, which included a career-best 2.0 tackles for loss.

Thompson, who was named the Mountain West Offensive Player of the Week once this season, has carried the ball 132 times for 951 yards and 14 touchdowns, while catching 22 passes for 336 yards (15.3 ypr) and two touchdowns. Overall, he had five 100-yard rushing games this year, including a career-high 141 yards on 13 carries and a career-best three touchdowns at Hawai’i. He also had at least one rushing touchdown in nine games this year and was the only running back in the conference to have 100 yards rushing and receiving in the same game as he had 140 rushing yards on 15 carries and 115 receiving yards on four receptions against San José State.

Woodward, a 6-2, 235-pound sophomore linebacker from Olympia, Wash. (Olympia HS), started all 11 games he played in this season and ranks first in the Mountain West and 10th in the nation with 124 tackles (11.3 pg), fifth in the MW in tackles for loss with 12.5 (1.1 pg), sixth in the MW in forced fumbles with two (0.18 pg), and ninth in the MW in sacks with five (0.5 pg). On the season, Woodward leads the team in tackles, tackles for loss and forced fumbles, while ranking second in sacks, to go along with one interception. Overall, he has recorded seven double-digit tackle outings on the season, including a career-high 20 stops at Colorado State, which are the most tackles by an Aggie since 2015.

Adeoye, a 6-3, 275-pound senior defensive end from St. Louis, Mo. (Ritenour HS), started three of the 12 games he played in this season and is tied for third in the Mountain West and tied for fifth in the nation with three fumbles recovered (0.25 pg). Adeoye ranks second on the team among defensive linemen with his 35 tackles, which includes 1.0 sacks and 4.0 tackles for loss. He recorded a career-high seven tackles against Air Force this year and had a career-best 1.5 tackles for loss against New Mexico State.

Castaneda, a 6-4, 305-pound senior offensive lineman from Round Rock, Texas (Round Rock HS/Ellsworth CC), started all 12 games at right guard and had an overall performance grade of 89 percent and only allowed one sack all season. During the year, he ranked fourth on the team in offensive snaps played at 623 and was third on the team with 33 knockdowns, which included a season-high four against four different opponents.

Eberle, who has been named the Mountain West Special Teams Player of the Week twice this season, tied two NCAA single-game records this fall against New Mexico State with his 24 points scored and three 51-yard field goals, as he became just the sixth player in NCAA history to make three 50-yard field goals in a game. Both of those marks are also school and conference records. He also set school and MW records as he was 6-for-6 on field goal attempts against NMSU, which is tied for the third-most made in a single-game in NCAA history.

Ferguson, a 6-foot, 210-pound senior safety from Mendon, Utah (Mountain Crest HS/Snow JC), started 11 of the 12 games he played in this season. Overall, he ranks fourth on the team and is tied for 32nd in the Mountain West with his 68 tackles (5.7 pg), which includes 1.0 sacks and 3.0 tackles for loss. He is also tied for third on the team with two interceptions and had one fumble recovery, to go along with four pass breakups. He had a career-high 15 tackles against Air Force this year and returned his first career interception 40 yards for a touchdown at No. 11 Michigan State.

Leilua, a 6-2, 285-pound redshirt junior defensive end from Anaheim, Calif. (Spanish Fork (Utah) HS/Oklahoma State), started all 12 games this year and ranked 10th on the team and first among defensive linemen with 37 tackles, which included 1.5 sacks and 5.5 tackles for loss, to rank fourth on the team.

Raymond, a 6-5, 250-pound junior tight end from Provo, Utah (Timpview HS), is third in the Mountain West among tight ends in receiving yards (313) and fourth in receptions (23), despite missing nearly four games with a broken hand. Overall, he is fifth on the team in both receptions and receiving yards, while adding two receiving touchdowns. He began his junior season by catching a career-high seven receptions for a career-best 76 yards at No. 11 Michigan State.

Tarver, a 6-3, 215-pound senior wide receiver from Belle Glade, Fla. (Glades Central HS/Fort Scott CC), started all 12 games this season and is seventh in the Mountain West and 61st in the nation with his 62 receptions (5.2 pg), and seventh in the MW and 62nd in the nation with his seven receiving touchdowns (0.6 pg). Overall, he has caught 62 passes for 676 yards (10.9 ypr) and seven touchdowns to lead the team in every receiving category. On the year, he has two 100-yard receiving games as he caught a career-high-tying nine passes for a season-high 128 yards against Air Force, and then had seven catches for 112 yards against New Mexico. He also had a career-high-tying two receiving touchdowns in back-to-back games against BYU and UNLV.

Taylor, a 6-5, 300-pound senior offensive lineman from Vallejo, Calif. (Vallejo HS/Laney CC), started all 12 games at right tackle and had an overall performance grade of 91 percent and only allowed two sacks all season. During the year, he ranked third on the team in offensive snaps played at 656 and was second on the team with 40 knockdowns, which included a season-high five against UNLV.

Unga, a 6-foot, 295-pound nose guard from Rochester, Calif. (Rancho Cucamonga HS), started all 12 games this year and ranked third on the team among defensive linemen with 32 tackles, which included 0.5 sacks and 2.5 tackles for loss. On the season, he had a career-high nine tackles against Air Force and recorded at least three tackles in six games.

Williams, a 5-9, 180-pound cornerback from Smyrna, Tenn. (Smyrna HS/Independence CC), led the team and ranked third in the Mountain West with 13 passes defended (1.1 pg). He is also tied for third on the team with two interceptions and is seventh on the team with 42 tackles, which includes 1.0 sacks and 3.0 tackles for loss, while adding one forced fumble. He had a career-high 1.0 sacks and 3.0 tackles for loss as part of his six tackles against New Mexico State and posted a career-best three pass breakups against Colorado State.

Utah State is 10-2 on the season and tied for first place in the Mountain Division of the Mountain West with a 7-1 league record. For USU, it is just the third time in school history that USU has won 10 games, along with the 2012 (11) and 2014 (10) teams, while its seven conference wins are tied with the 2013 team for the most in school history. This season also marks the second time in its six years in the MW that it has either won or shared the Mountain Division title.

Utah State, which is bowl eligible for the seventh time in the past eight seasons and will play in its 13th bowl game in school history this year, will learn its postseason destination on Sunday, Dec. 2.