For the summer, Utah State University undergraduate Scott Shahverdian planned to return to his river guide job on the Green River, running rapids through southeastern Utah’s breathtaking canyon country. Instead, he jumped at the chance to spend hours collecting sandy sediment in unsettled weather and conducting painstaking research in darkened laboratories.

“My river buddies think I’m crazy,” says Shahverdian, who entered USU last fall. “But I’m thrilled with the opportunity to pursue research that’s fascinating to me.”

The Connecticut native is among the first grant recipients of USU’s pilot Summer Undergraduate Research and Creative Opportunities — SURCO — program, which USU’s Office of Research and Graduate Studies launched this summer [2012]. Modeled after the office’s successful academic year URCO program, the competitive grants are intended to provide students, who would otherwise need to seek employment, with opportunities to earn and learn while conducting summer research.

With guidance from faculty mentor Patrick Belmont, assistant professor in USU’s Department of Watershed Sciences, Shahverdian is investigating variability in long-term sediment yield throughout the Columbia River Basin with master’s student Elijah Portugal. Their research is part of a larger, National Oceanic and Atmospheric Administration-funded study coordinated by the Integrated Status and Effectiveness Monitoring Program of the Columbia Habitat Monitoring Program.

“Until I got involved in this project, I didn’t realize how much energy scientists put in to studying rivers,” says Shahverdian, who completed a 14-day trip to a remote study site in the upper reaches of eastern Oregon’s John Day River basin at the end of spring semester. Over the course of the summer, he and Portugal will make additional study trips to sites in Washington and Idaho, and will return to the Oregon site.

“We’re trying to gain insight into how physical changes in the landscape relate to erosion and sediment transport through salmon habitat,” Shahverdian says. “We’re looking at changes over 1,000-year time scales to see if erosion rates are changing and, if they are, why they’re different and what mechanisms are causing changes.”

Knowledge gained through the study will aid scientists and river managers in determining the most appropriate and effective restoration options for waterways throughout the Columbia River watershed, he says.

In the field, the team’s days start early and end late as the student scientists carefully map and document characteristics of stream segments.

“Carrying buckets, shovels and other tools, we slowly make our way along each segment and, using a GPS unit, make note of points of interest and select sites to collect sediment,” Shahverdian says.

The students use sieves to manually collect sediment, a meticulous process that sometimes requires hours of focused labor.

“At one site, it might take 45 minutes to fill a collection bag of sand but, at another, it might take three or four hours to get a sample,” he says.

Camping in tents in all types of weather, the team went for days without seeing other humans.

“Our study areas are away from established trails so we don’t often encounter other campers,” Shahverdian says. “But we saw black bears, deer, elk, bobcats and lots of predatory birds.”

Back on campus, the undergrad researcher uses a variety of dating technologies to determine the age of the collected sediment samples.

“We have access to some pretty incredible dating techniques,” Shahverdian says. “One, radiocarbon dating, has been around for a long time. But OSL — optically stimulated luminescence — and TCN, terrestrial cosmogenic nuclide dating, are relatively new and are far more versatile, allowing us to date many landforms that don’t have material suitable for radiocarbon dating.”

Utah State houses the USU Luminescence Lab, established in 2007, on its North Logan Innovation Campus. It’s the only lab of its kind in Utah and one of few labs in the country with single-grain OSL dating capability, a specific technique that allows researchers to determine the ages of individual grains of sand.

Getting involved in cutting-edge research isn’t what Shahverdian expected of his USU experience.

“I started with one path in mind and thought I’d spend most of my time in classroom,” he says. “But after taking Patrick Belmont’s class in watershed hydrology and getting involved in research, I’m discovering exciting learning opportunities that tie in with my interests at the intersection of land and water management and social issues.” 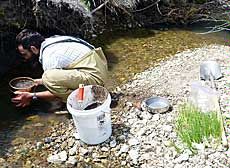 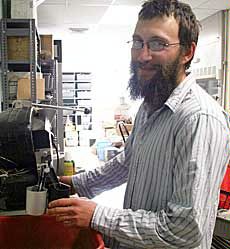 Back on campus in a USU geology lab, Shahverdian uses a magnetic separator to prepare sediment samples for optically stimulated luminescence dating.