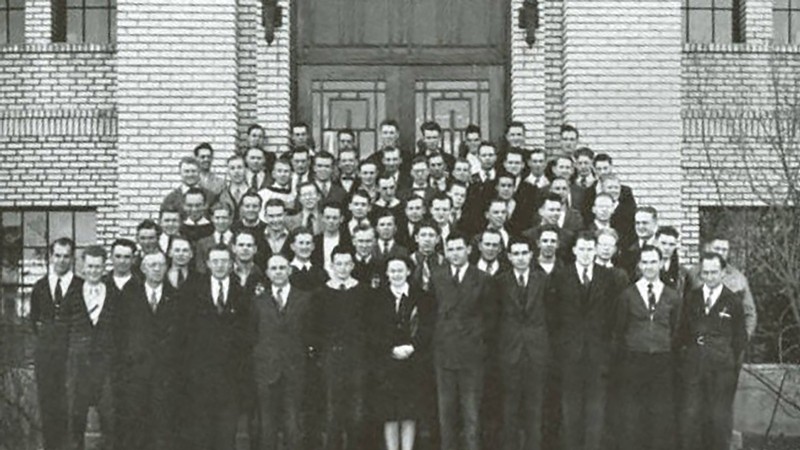 Ms. A. Kearl was the first woman in the USU Civil Engineering Club in 1939 (first row, center) in front of the Ray B. West building. 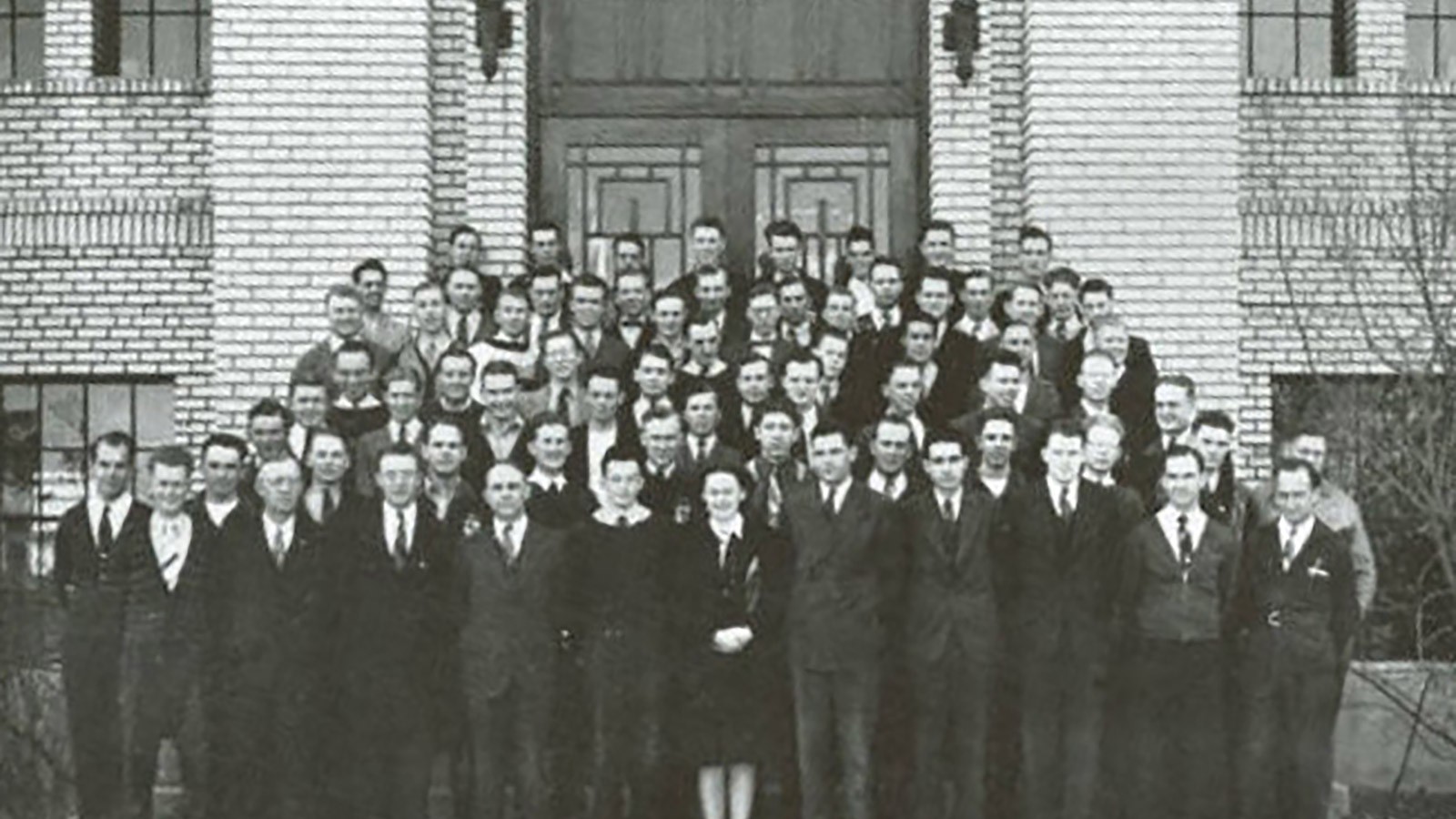 In the early days of education for both men and women (women began to be admitted to colleges in 1837), areas of study were often gendered, leading women, although educated, to remain in the domestic sphere, whether that be through teaching or through running their own home. While many women became trailblazers in their designated fields, they often faced resistance on their path to personal achievement. Through personal determination and support from relations and mentors, women began to break down gendered barriers, demonstrating that they were as capable as men.

Photo archives document that women participated in mechanical courses since the 1920s, but it was not until some years later that record is found of a woman thoroughly involved in engineering.  The 1939 Buzzer yearbook documents Ms. A. Kearl as the first woman involved in the college’s Civil Engineering Club. On the other hand, it wasn’t until 1967 that the College of Engineering graduated its first woman, Adonna Watkins. A Herald Journal article published in 1979 records that women comprised only 5% of the College of Engineering student body. Women who were interviewed reported that most ended up in engineering because of encouragement from high school teachers and counselors, demonstrating the importance of mentors in any given career field. Today, women comprise just over 15% of the College of Engineering student body and have established an active campus chapter of the Society of Women Engineers (SWE).

Dr. Idalis Villanueva has had the consistent goal to help people throughout her career in academia. Villanueva is known for her work researching communication in learning environments, focusing on identifying and eliminating the “hidden curricula” – unspoken academic rules and social norms that are not known across all groups of students and faculty, specifically those from diverse social and cultural backgrounds. She specifically hopes her research will help retain and recruit underrepresented students in faculty that pursue STEM careers.

Villanueva is a first-generation student from Puerto Rico, where her parents taught her to be a problem solver. She graduated from the University of Puerto Rico-Mayaguez in 2004 with a bachelor’s degree in Chemical Engineering. Villanueva continued her education in the states at the University of Colorado, earning a Master’s (2007) and Ph.D. (2009) in Chemical and Biological Engineering.

At the time she received the PECASE award, several individuals praised Villanueva for her passion and determination in engineering education. Graduate students spoke of Villanueva as an excellent mentor who encouraged them to believe in themselves and to do more. Through her mentorship, many students have chosen to continue in the engineering program. In an interview conducted when she received the PECASE, Villanueva said, “I do hope that this inspires other Latinx women and other intersectional individuals to see engineering as a pathway for them and as a way to inspire future generations as well.”

Villanueva has been the recipient of numerous awards in addition to the PECASE, a testament to her hard work and dedication on behalf of students and her research. Some of these include the National Science Foundation CAREER Award (2017-2021),USU Robins Award: Faculty Researcher of the Year (2019), and Researcher of the Year for the College of Engineering (2019).

When she began her college career, Elizabeth Vargis considered becoming a doctor but found a home in engineering when she became more interested in making healthcare more effective and accessible. Graduating with a bachelor’s in Bioengineering (2014) and a Master’s and Ph.D. in Biomedical Engineering, Vargis now uses her education and research to make better models of the human eye and develop new methods to easily detect bacteria or biomarkers of cancer. In 2019, Vargis received a three-year grant from the National Eye Institute for her research surrounding retinal disease. As part of her research, Vargis and her team will determine the relationships between how retinal cells grow normally and why those conditions change.

While working at a breast cancer biology lab after she graduated from college, Vargis discovered an interest in the world of research. Finding herself in the lab all the time, Vargis decided to pursue academia, where she could research, teach, and act as a mentor for students pursuing biological engineering.

After learning the importance of mentorship through her own education, Vargis entered her career to help and inspire others, just as her mentors had done for her. As an Indian-American woman in engineering, Vargis is a minority, but she doesn’t let that stop her from making an impact. Vargis was asked what advice she had for underrepresented populations pursuing a degree in engineering. She stressed that the most important behavior is to find a support group of people who are in a similar situation and find mentors that will help and encourage a pathway to success.

USU is proud to boast an excellent faculty and staff who serve as mentors to USU students in their own educational journeys. It is through mentorship opportunities that we are able to come together as an Aggie community, and we can create a better future for ourselves, our community, and future generations. 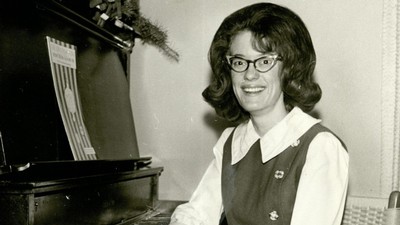 The College of Engineering graduated its first woman, Adonna Watkins, in 1967. 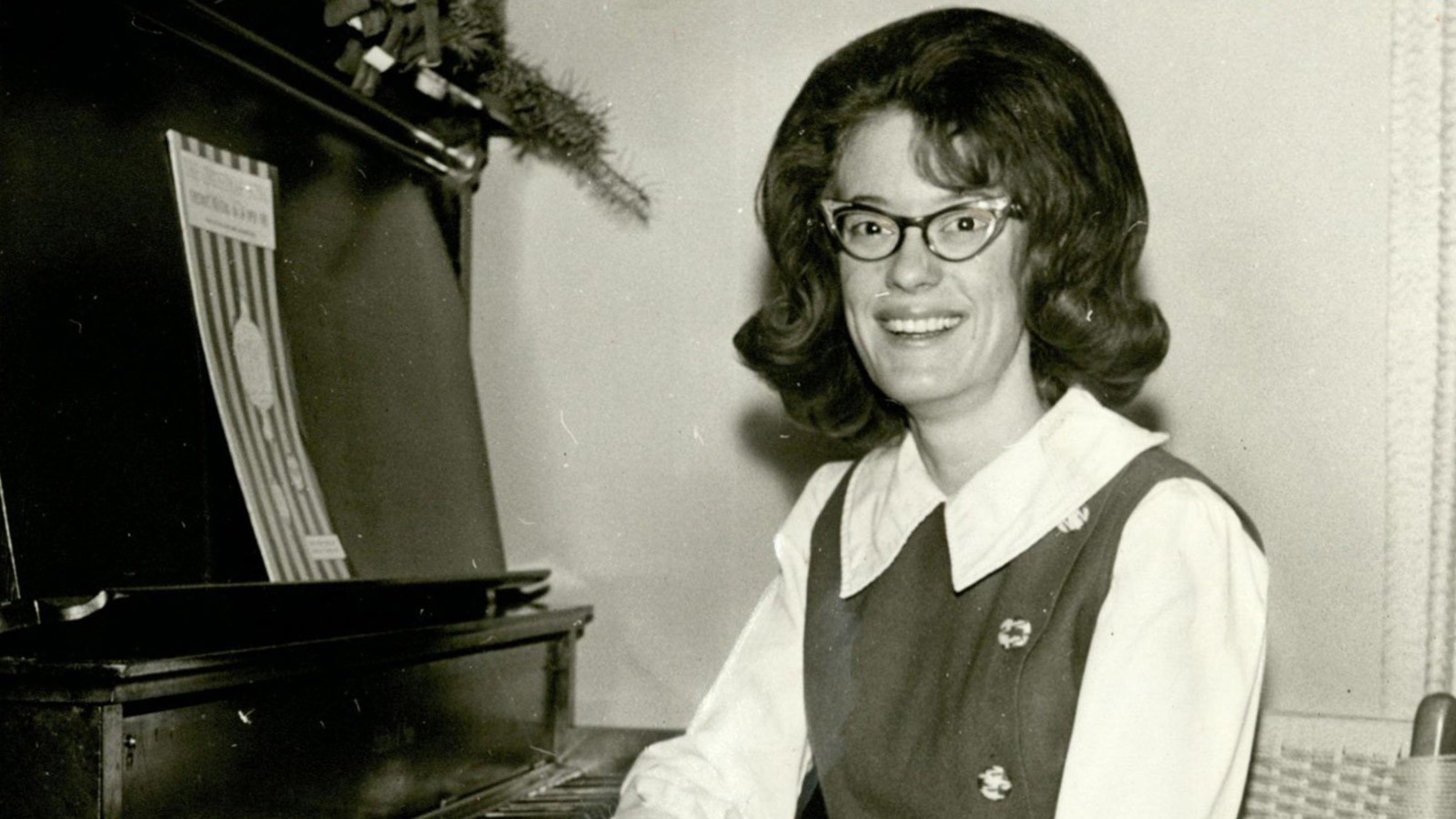 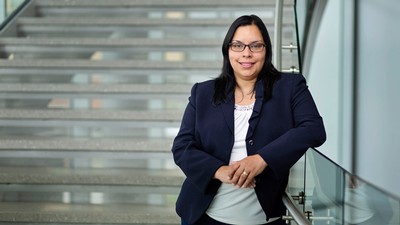 Idalis Villanueva has had the consistent goal to help people throughout her career in academia. 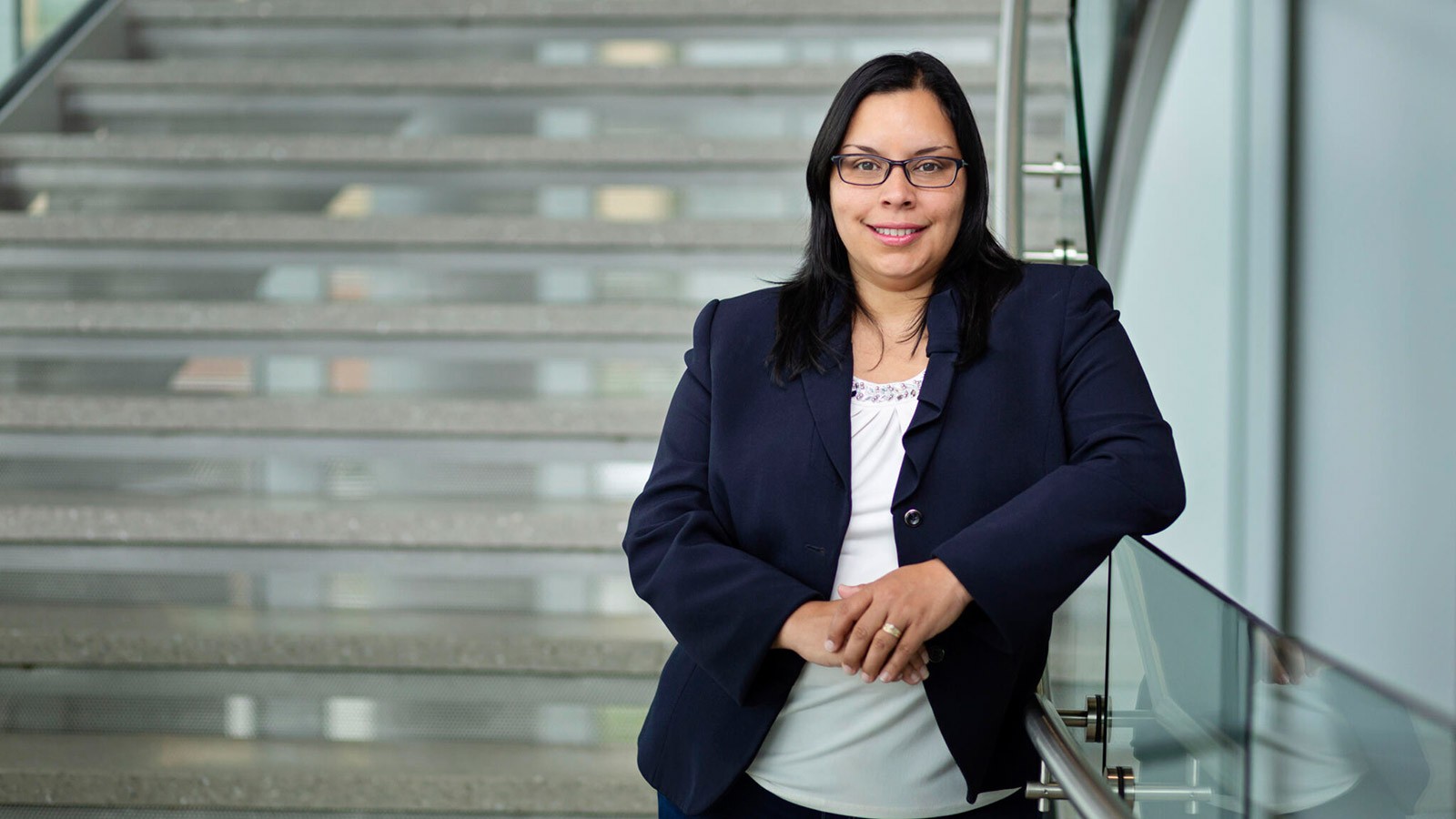 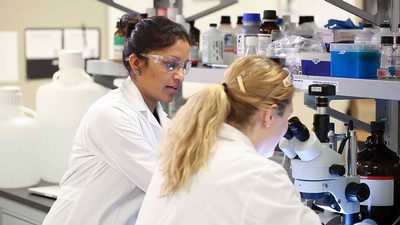 Elizabeth Vargis uses her education and research to make better models of the human eye and develop new methods to easily detect bacteria or biomarkers of cancer. 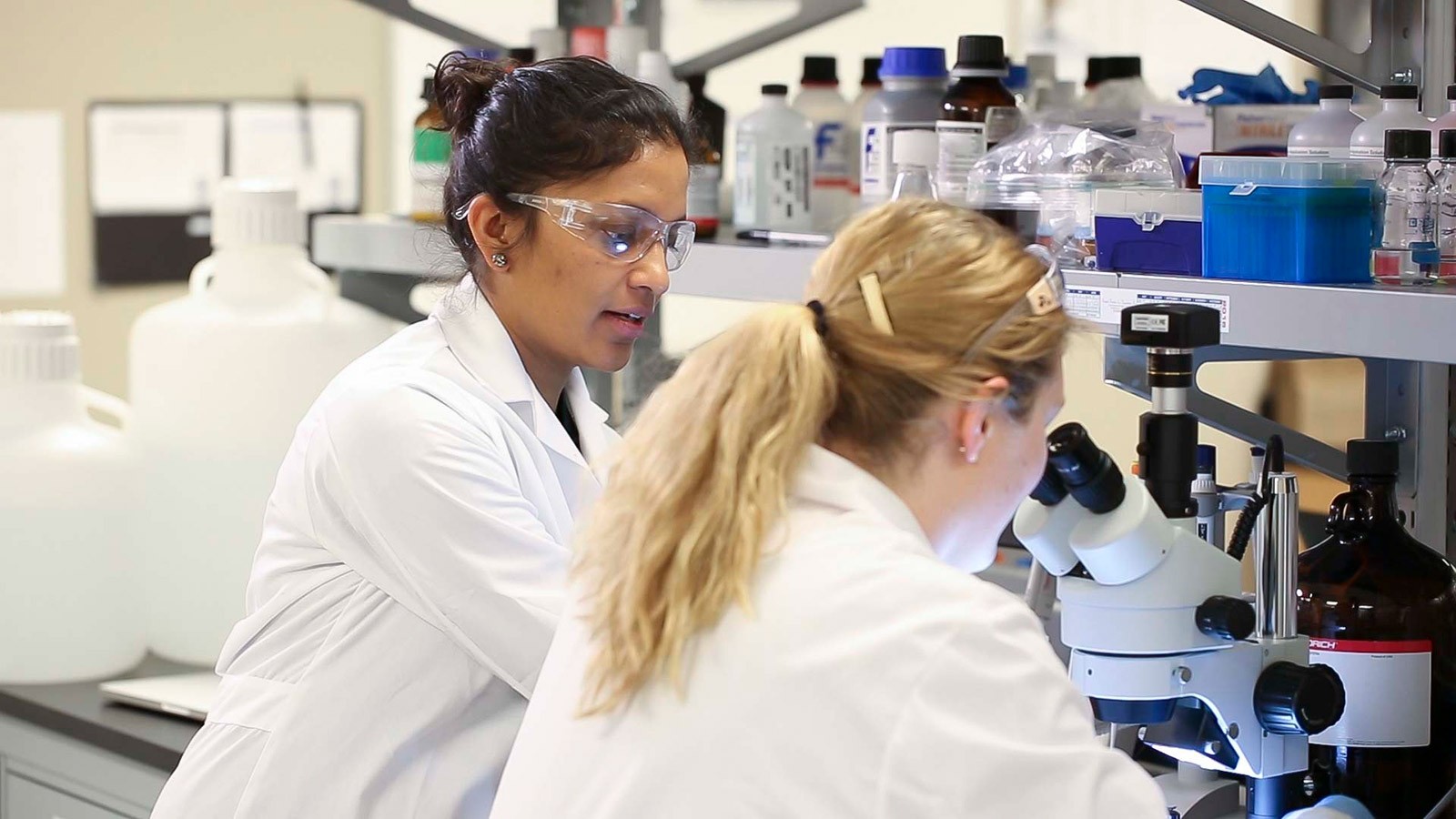 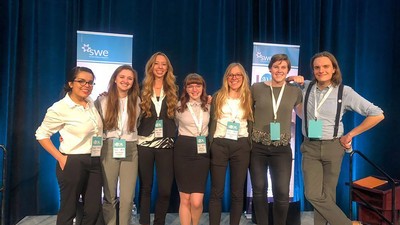 Today, women comprise just over 15% of the College of Engineering student body and have established an active campus chapter of the Society of Women Engineers (SWE). 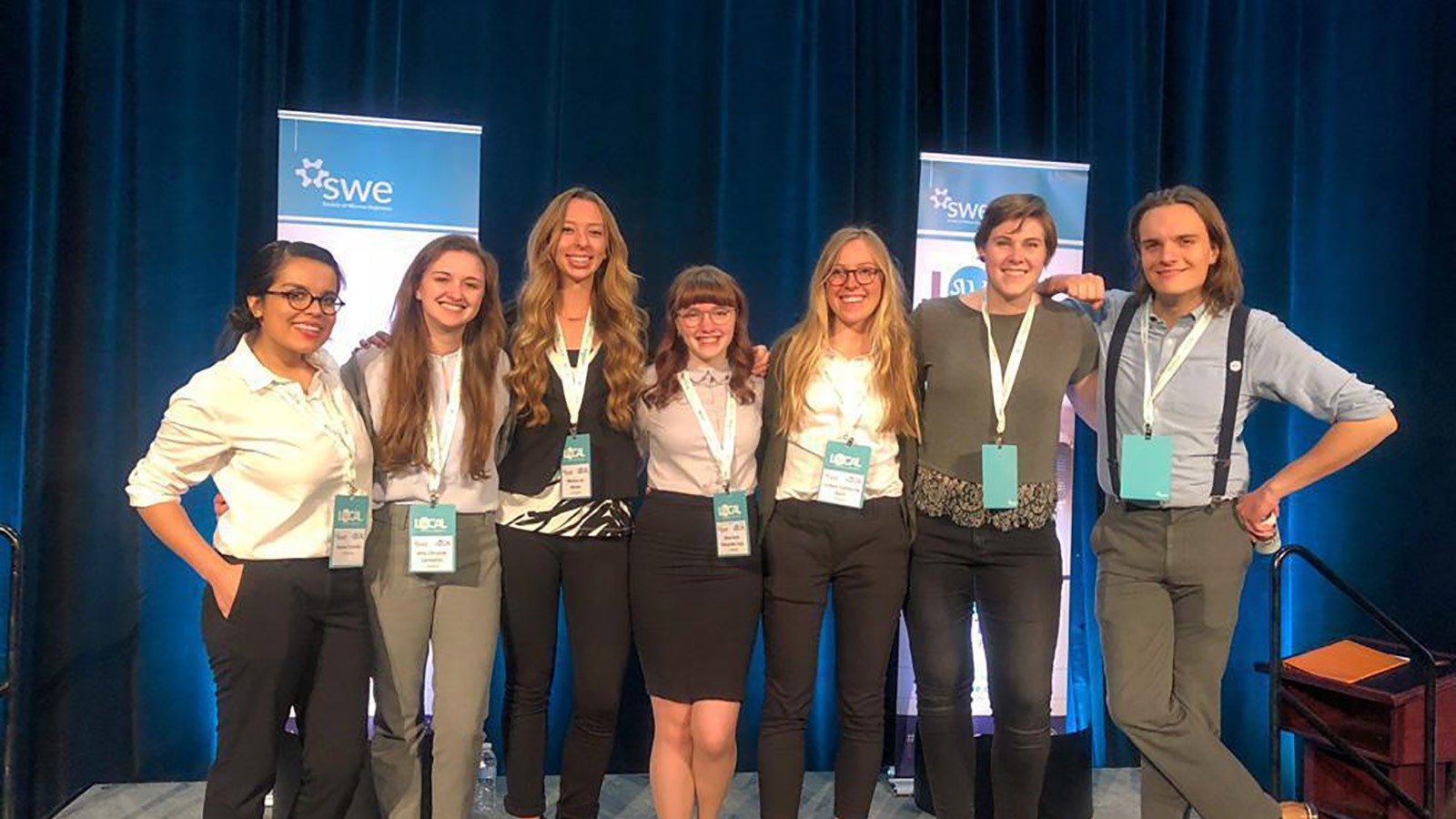