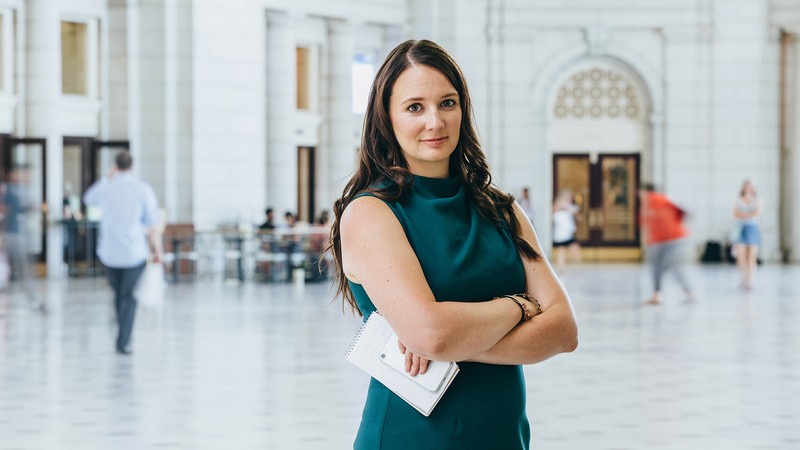 From her home-run newspaper as a child to the Utah Statesman, to The Wall Street Journal, Natalie Andrews has had a long-lasting dream to tell stories that help people and inform the public. 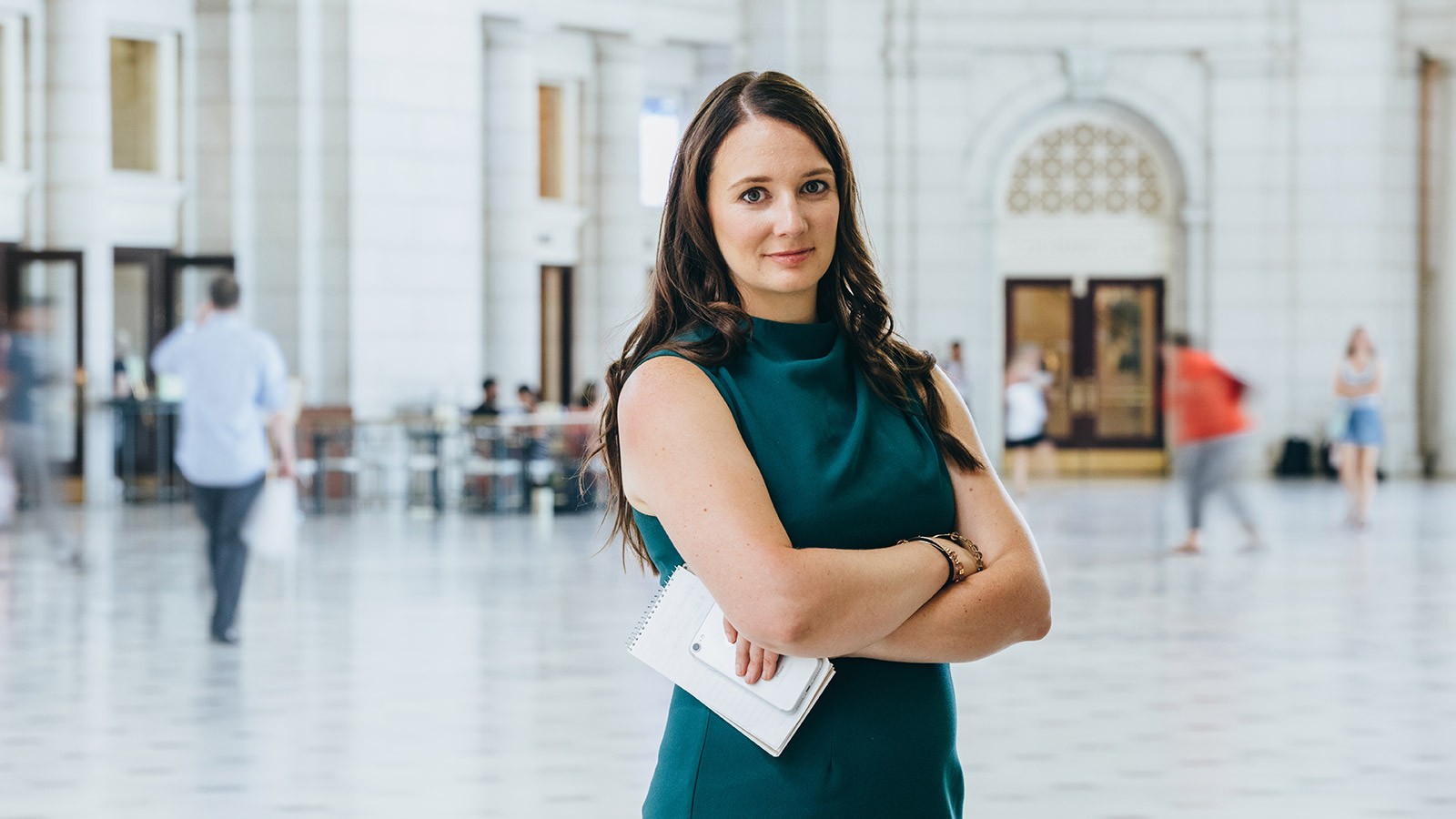 Utah State University and the state of Utah have a rich history of journalism. Even prior to Utah gaining statehood, the territory produced multiple news sources with many contributors being women. Today USU has a strong Journalism and Communication department that trains studying journalists with all they need to be successful in the industry.

Did I stay too long in the school room
After lessons were through
Leaving my mother and sisters
With all the work to do?
And has it vexed you, mother
My mother, so patient and true?
Forgive me, my mother and sisters,
Smile kindly and gently speak;
I’ll try to do better tomorrow
And all the rest of the week.
If my wayward mind and feelings
Do not play me another freak.
For I have been writing something
Which will likely enough be read
By our children’s children
After we all are dead;
And I must think I should have been
Washing dishes instead?
- 1870

Louisa Lula Greene was born in 1849 in Kanesville, Iowa, the eighth of thirteen children. In 1852, the Greenes migrated to the Salt Lake Valley where Louisa’s father taught school and acted as a representative in the legislature. In 1864, now in her teen years, Louisa and her family moved to Smithfield, Utah. Richards had an early interest in written stories, with some of her earliest poems dating back to when she was fourteen.

In 1867, at eighteen years old, Louisa and her sister opened a schoolhouse in Smithfield. Barely out of school herself, Louisa often found herself ill-equipped and ending the day with a headache. The journal she kept during her two years teaching often notes how she wishes she could be blessed with the knowledge she needs to teach “the little ones the way [she] want[s] to.” In 1869, Louisa at last had the opportunity to pursue higher education. While her location in Smithfield made her a prime candidate for the Utah Agricultural College, she did not have the option of attending because it would not be open for enrollment for another 20 years! Louisa set off for Salt Lake City, Utah and enrolled at the University of Deseret (presently University of Utah).

While she was at school, she began to work hard to achieve her dream of being a journalist. As she began to submit her works for publication, she was met with quick success and was published in both the Salt Lake Herald and Deseret News.

In 1872, Edward Sloan, the editor of Salt Lake Herald, approached Louisa with the opportunity to act as editor for a new women’s magazine, The Women’s Exponent. At 22, Louisa had some reservations about accepting the position. As a Latter-Day Saint woman, she wondered if she shouldn’t be focused on getting married. After receiving the council of Eliza R. Snow and her uncle, Brigham Young, Louisa accepted the position. She immediately set out to sell subscriptions for the magazine, with the first issue coming out on June 1, 1872.

For the first year and a half, Louisa worked out of her great-uncle’s basement with little equipment and few materials, but over time, the Exponent’s staff would grow to include associate editor, a secretary, a business manager, a consulting committee, and an ever-increasing number of contributors. The Exponent was the first continuous newspaper published for and by women west of the Mississippi and was read by thousands. While the Exponent was operated by Latter-Day Saint, or Mormon, women, the magazine was separate from the church and often covered non-religious topics such as woman’s suffrage.

In 1873, Louisa married Levi W. Richards and she continued her work at the Exponent. After Louisa had two daughters die in infancy, she decided that it was time for her to step down from her editorship and focus on raising a family. Succeeded by Emmeline B. Wells, The Women’s Exponent continued to be published until 1914 when it was replaced by the Relief Society Magazine.

Although Louisa stepped down from the Exponent, she continued to publish in various magazines, including: The Women’s Exponent, Relief Society Magazine, Children’s Friend, and Young Women’s Journal. She also published a book of verse entitled “Branches that Run Over the Wall.” Additionally, Louisa was a champion for suffrage, writing multiple poems and songs, such as ‘Women, Arise!”

“Woman ‘rise, thy penance o’er, sit thou in the dust no more, seize the scepter, hold the van, equal with thy brother, man.”

While rearing her family, Louisa continued to write, serve in community and church leadership positions, and travel to various women’s conventions. Louisa died in Salt Lake City in 1944, at 95 years of age.

Now: Cathy Bullock – Professor and Interim Department Head in the Department of Journalism and Communication (2001 – Present)

Cathy Ferrand Bullock was a natural to lead with Dr. Candi Carter Olson the 2019 Bennion Teachers’ Workshop on “Gender, Media, and Suffrage in the United States.” Her research includes media coverage of historic civil rights battles. Teachers in the workshop learned about how suffragists were skilled public relations strategists who used everything from newspapers and cartoons to cookbooks, textiles, and marches to shape attention paid to social issues. The participants marched in a suffrage-style parade in downtown Logan and presented an updated Declaration of Sentiments to Mayor Holly Daines. Having visited Seneca Falls, Dr. Bullock helped bring living historians portraying Frederick Douglass and Lucretia Mott to campus for a “conversation.” She is well versed in the Suffrage Songbook and an accomplished musician, directing the Westminster Bell Choirs in the community.

Dr. Bullock came to Utah State University in 2001 after earning a doctorate at the University of Washington. Prior to joining the USU faculty, her work focused on magazine writing, editing, and photography. As a professor, Dr. Bullock serves as interim department head, teaches classes on mass media, and engages in academic research with a focus on how media cover domestic violence, child abduction and sexual assault.

From her home-run newspaper as a child to the Utah Statesman, to The Wall Street Journal, Natalie Andrews has had a long-lasting dream to tell stories that help people and inform the public.

Andrews is a Utah State University alumna who graduated in 2006 with a bachelor’s in journalism. She first started as a police beat reporter in Provo before moving to San Diego where she worked at a small business daily paper. In 2011, she graduated from the University of San Diego with a Masters of Business Administration in Marketing.

She returned to Utah to direct social media at KSL News in Salt Lake City. While there, she developed and produced stories under the KSL Interactive brand, which pioneered using Twitter and Facebook in television news. Two of the stories were recognized with Rocky Mountain Emmy awards. Andrews returned to USU for the 2013 fall semester as an adjunct instructor, teaching a course targeted toward digital journalists and public relations specialists. The course covered social media, mobile development, coding, and content creation.

In 2014, Andrews moved to Washington, D.C. to work for The Wall Street Journal as the social media editor for the politics team and explore emerging platforms for storytelling, such as Snapchat. After the 2016 presidential election, she joined the Journal’s Congress team as a reporter. She has since covered the confirmation of Supreme Court Justice Brett Kavanaugh, House Democrats’ fight to take the House in 2018 and the impeachment investigation and trial of President Donald Trump.
_________________________________________

Women like Cathy Bullock and Natalie Andrews are strong examples of individuals who carry on the legacy of those who have come before them. Women like Louisa Lula Greene Richards were not always admitted or accepted in the workforce, but they pressed forward with the support of others and with a hope for the future. Their dreams live on through those individuals who take chances and embrace opportunities to pursue what they love and continue to work to make the world a better place for those who will come after them.

Andrews is a Utah State University alumna who graduated in 2006 with a bachelor's in journalism. She first started as a police beat reporter in Provo before moving to San Diego where she worked at a small business daily paper. In 2011, she graduated from the University of San Diego with a Masters of Business Administration in Marketing. 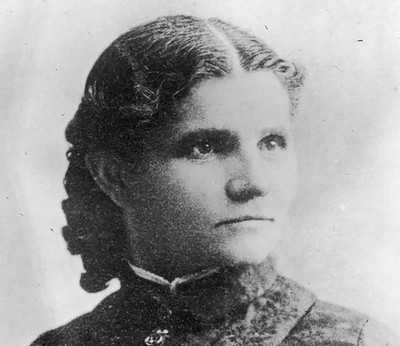 Louisa Lula Greene Richards enrolled at the University of Deseret (presently University of Utah) in 1869 and while she was at school, she began to work hard to achieve her dream of being a journalist. Image courtesy of Utah State Historical Society. 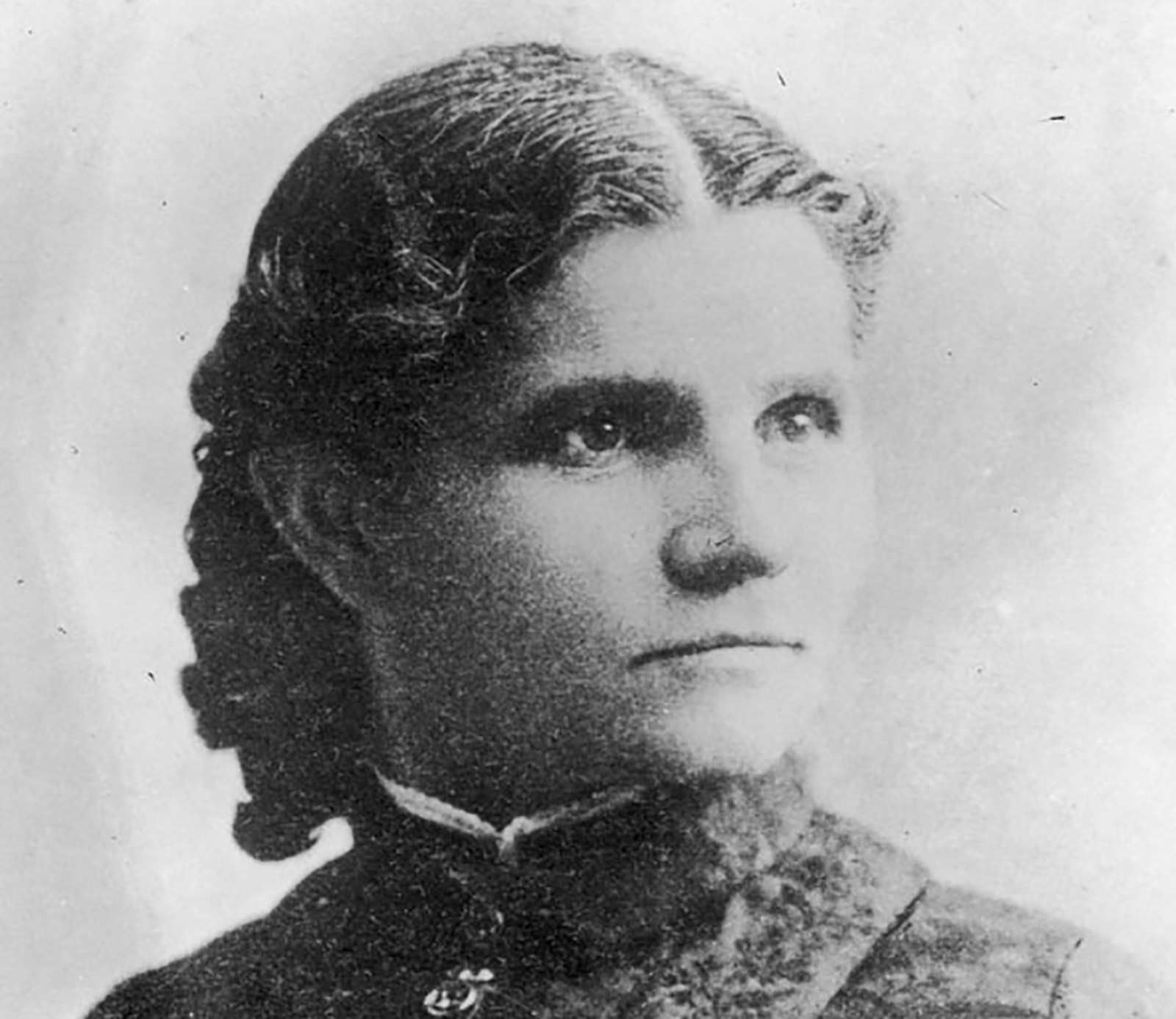 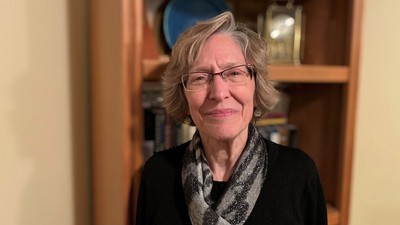 Cathy Bullock came to USU in 2001 after earning a doctorate at the University of Washington. Prior to joining the USU faculty, her work focused on magazine writing, editing and photography. 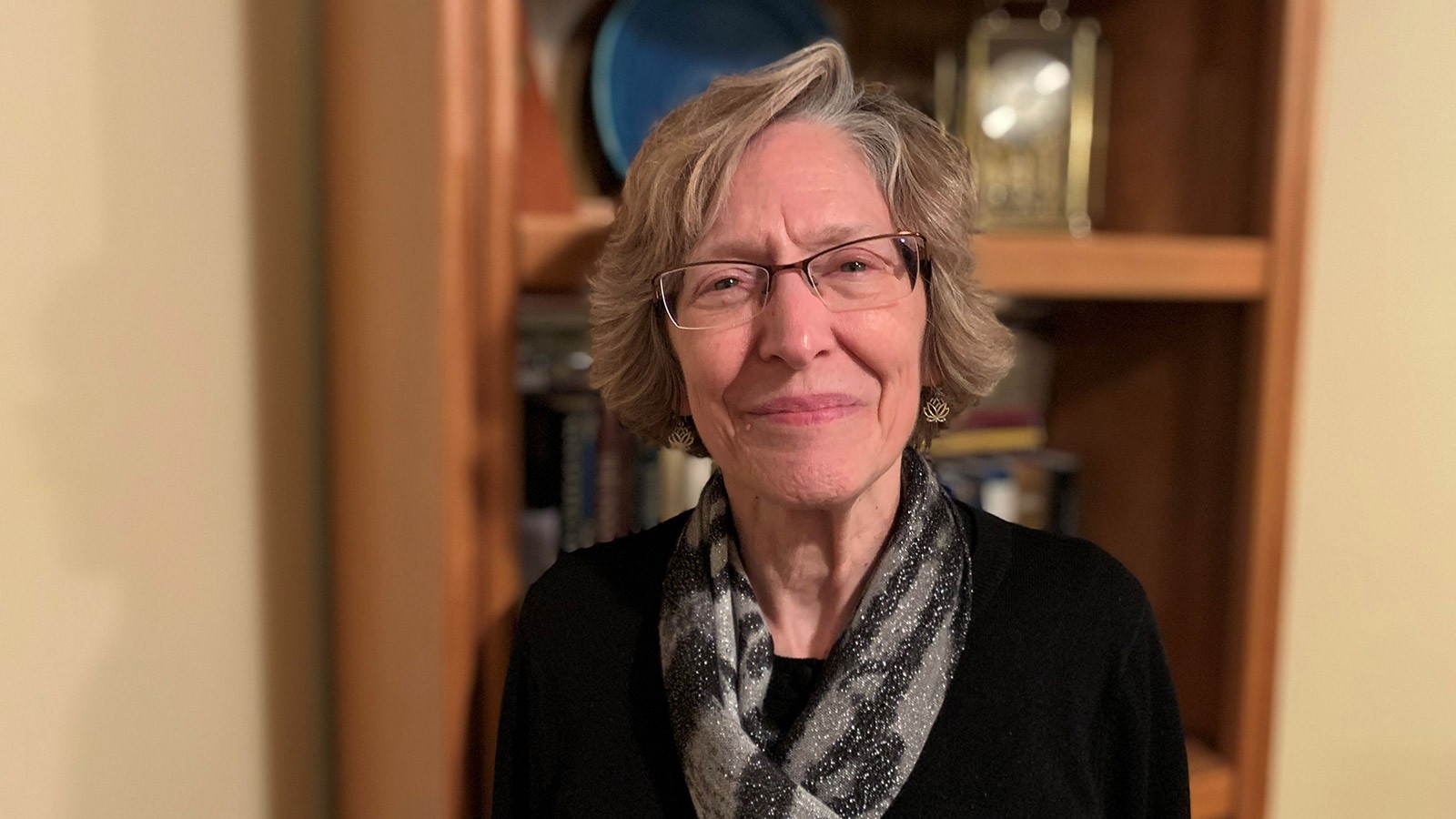 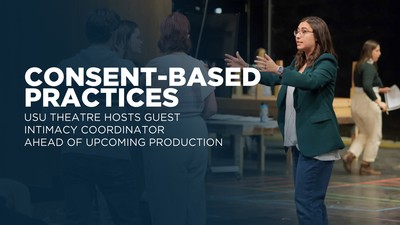