The Value of Higher Education for Women in Utah

The critical need for college-educated individuals within the state of Utah has become an ongoing discussion in a variety of settings. In fact, a newly released study commissioned by the Utah System of Higher Education (USHE) found that 99 percent of Utahns sampled believe that higher education is important; 82 percent say it is “very important.” Yet, in 2008 only 29 percent of Utahns 25 years and older held bachelor’s degrees or higher. Although the number of students getting degrees has slowly increased over the last several decades, Utah now falls behind the national average in terms of having an educated citizenry. One of the most recent concerns is that the number of women in the USHE is significantly below the national average. National statistics show that more women (57 percent) enroll in college than men. However, in Utah approximately 49 percent of higher education students are women, with the lowest percentages enrolled at the University of Utah (44) and Utah Valley University (43). This report outlines various aspects of the broad value of higher education.

On average, better-educated women live longer and are more likely to enjoy healthier lives than their less educated peers. Researchers have found that “with the exception of black males, all recent gains in life expectancy at age 25 occurred among better-educated groups.” This is due primarily to an overall healthier lifestyle. College-educated individuals tend to smoke less, exercise more, and maintain a healthier diet. More educated women are less likely to be overweight or obese. Other studies report that educated individuals have lower alcohol abuse-dependency, lower cholesterol levels, and higher dietary fiber intake. One study found that “each additional year of schooling past high school seems to prolong life by 0.4 percent, or nearly 2 percentage points upon graduation from college.” Interestingly, not only do more educated women live T Nationally, more women (57%) than men enroll in college. In Utah, 49% of students are women. UWEP Utah Women and Education Project 2 longer, but Fox News recently reported that their spouses live longer as well.

Women with college degrees demonstrate increased participation in civic and community involvement. Not only does higher education prepare a more ethically aware and contributing member of the community, but college graduates are more likely to vote than high school graduates by a 2:1 ratio. The College Board reported that in 2006 college graduates had a volunteer rate of 43 percent compared with 19 percent of high school graduates. In fact, the median number of volunteer hours appears to increase with levels of education. This includes a National Health Interview Survey finding that college graduates are even more likely to donate blood. These trends, in part, can be explained by the finding that higher levels of education provide students opportunities to apply what they have learned in non-profit organizations and other community-based settings through internships and course-related service learning.

There are many reasons why a college education contributes to better parenting. Educated mothers are more likely to give birth to healthier babies, since they are less likely to consume alcohol or smoke, choices that set the foundation for the child’s future. Numerous researchers have found that there are increased risks of developmental and health problems for low-weight babies. One group of researchers found that children born below average weight had lower reading and math scores; however, “the independent net effect of maternal education appears to far outweigh the effect of MLBW [moderately low birth weight] as a predictor of children’s test scores.”

College institutions historically seek to influence and promote self-understanding of individuals through targeted development of independence, interpersonal relationships, and leadership training. Most institutions provide opportunities for students to confront dogma and prejudice, which allows students to examine and develop the moral and ethical standards needed for occupational preparation.Research shows that higher education delivers sustained changes in psychosocial development as well as in attitudes and values.

Intellectual and cognitive development is a positive byproduct of higher education for women. Today’s students are preparing for jobs that may not currently exist. In order to succeed in a complex global work environment, women need the training and skill base of a strong education in order to respond effectively to the dynamics of changing technologies. A broad educational experience provides the communication skills as well as creative and critical thinking skills necessary to perform in an economy that demands its workers develop habits of lifelong learning. One report from the American Association of Colleges and Universities stated that this type of “education is the best and most powerful way to build students’ capacities to form reasoned judgments about complex issues.” Importantly, reasoned judgment is not only a critical competency women need in the workplace, but also a skill needed for effective contributions in politics, communities, churches, and homes. Research also shows that women in particular receive valuable development opportunities in the areas of verbal and writing skills, interpersonal and teamwork abilities, quantitative and analysis skills, critical thinking, reflective judgment, principled moral reasoning, integrating ideas and concepts, gaining content knowledge in various fields, and learning effectively on their own.

The positive impact on society as education relates to economic stability cannot be underestimated. Societies that have higher levels of education are safer and have less poverty. For every year of increase in the average schooling level within a community, there is a 30 percent decrease in murder. According to the 2009 American Human Development Project, “Education is the single most important factor in the determination of a person’s poverty status: almost 24 percent of the adult population without a high school diploma is poor, compared to 11 percent of those who are at least high school graduates and only 3.6 percent of college graduates.” Education provides the avenue out of poverty and encourages individuals who are less prone to commit criminal behavior and more likely to participate in civic activities.

To learn more about The Value of Higher Education for Women in Utah read the entire brief. 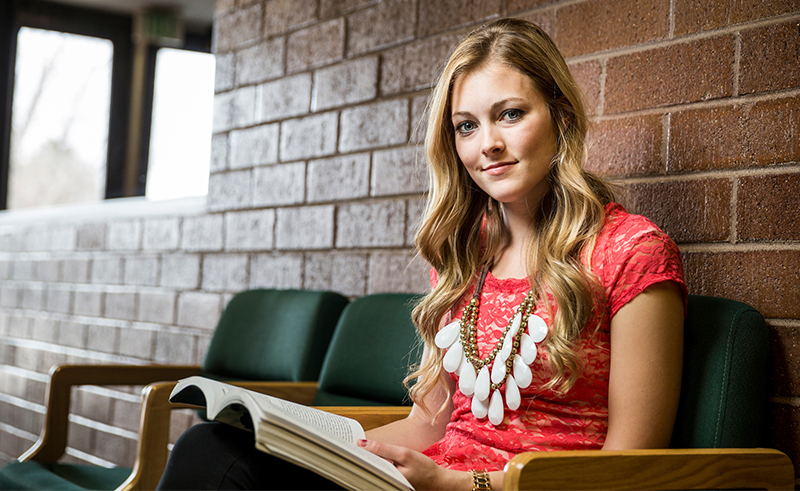