It seems Mayor Seghini never sleeps. Elected multiple times to serve as Midvale City mayor, she continues to actively lead in her late 70s, though she says this is her last term. She’s still putting in 7-8 hours a day.

As Doug Robinson of the Deseret News describes it, Midvale is getting quite a deal:

Her job is supposed to be a part-time gig, but there’s nothing part time about the way she does it. She works seven to eight hours a day, including Saturdays. On weeknights she’s often in meetings, which is what happens when you belong to 33 boards and committees around the valley.

Why does she put in such long hours?

“Midvale is the smallest community in Salt Lake County,” she says. “If I’m not there to be the voice for my citizens, many things will not happen — funding for special programs, transportation funding, attracting other businesses. If you’re going to go after the money, you gotta be at the table because larger communities have a much larger voice.” (Deseret News, May 3, 2015)

In 2014, Mayor Seghini was awarded the Eleanor Roosevelt Award by the Democratic Party. The newspaper reported:

Seghini… said she was especially honored to receive the award as a mayor, which is a nonpartisan elected office. “Being nonpartisan means that I’m responsible for letting every person in my community know that every one of them is part of a party called ‘People From Midvale,'” she said. “I have to make sure everybody in my community feels like they are part of that party.”

Mayor Seghini is respected at every level of government, making her effective in making things better for Midvale. She has served over 30 years as a city council woman or mayor.

Her advice to women: Just get the job done. 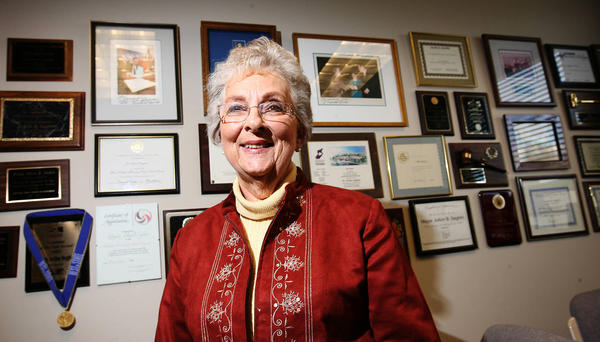