The Status of Women in Utah Politics: A 2017 Update

It has been three years since the release of the first set of UWLP status briefs. This report updates the 2014 brief titled “The Status of Women in Utah Politics.” Tracking progress through updated status reports is an important way to help decision makers and other influencers clarify what is working and to determine and refine best steps moving forward. For this brief, we have removed the section on voter participation as those statistics appear in the 2016 Utah Women Stats research snapshot titled “Voting and Civic Engagement Among Utah Women.” We have added new sections on elected county positions, city councils, and boards of education. This update provides both Utah and national data for the following seven areas: Congress, statewide executive offices, state legislatures, counties, mayors, city councils, and boards of education. The brief concludes with a discussion focused on understanding why more women do not run for public office and offers suggestions on how Utah can move the needle in future years.

Utah has six seats in its national delegation (two senators and four representatives). Most recently, Congresswoman Mia Love was elected to the U.S. House of Representatives in 2014, taking office in 2015, which puts Utah at 16.7% (1 of 6) of its congressional delegation as female; Love was reelected in 2016. Congresswoman Love was the first Utah woman elected to Congress since 1995. Prior to Congresswoman Love’s victory, only three Utah women had served in Congress since its statehood: Rep. Reva Z. Beck Bosone (1949–1953), Rep. Karen Shepherd (1993– 1995), and Rep. Enid Greene Waldholtz (1995–1997).  Two of the three served only one two-year term. Utah has never elected a woman to serve in the U.S. Senate, but, in electing a woman to its congressional delegation, the state has made some progress since our initial brief was published.

There are currently no women serving in Utah SEO. Of the statewide offices up for election in 2016 (governor/lieutenant governor, attorney general, state auditor, and state treasurer), no party (major or third) nominated a female candidate. Throughout its history, Utah has never elected a woman to serve as governor. However, Utah has had one female governor and lieutenant governor. Olene Walker served as lieutenant governor to Mike Leavitt from 1993–2003, until he was nominated by the Bush Administration to serve as the Secretary of the U.S. Department of Health & Human Services. Walker was then appointed as governor to serve until the end of Leavitt’s term from 2003-–2005. She sought re-election but did not win the Republican nomination at convention. The only other woman to serve in a Utah statewide officer role was Jan Graham (D), who was attorney general from 1993–2001.

In 2016, Utah was ranked 43rd in the nation in terms of women serving in the state legislature; that ranking will likely improve in the 2017 legislature, as Utah had a 3.8% increase in female representation in that body compared to the prior year. In 2017, 21% of the Utah Senators, or six of 29 (3 D, 3 R), and 18.7% of the House of Representatives, or 14 of 75 (9 D, 5 R), are female. This means that since 2014 Utah women have gained one additional seat in the Senate and two more seats in the House of Representatives. Overall, 19.2% (20 of 104) of Utah legislators are women. It is interesting to note that in 1971, 8.2% of Utah state legislators were women, while at the national level only 4.5% of seats were held by women. By 1981 Utah had slipped below the national average. In Utah, data also show that female legislators are more likely to be Democrat than Republican.

For Utah, we collected 2016 county data from links listed on the Utah Association of Counties website. We then compared the 2016 database with the lieutenant governor’s online election results site to determine the number of county officials elected in 2016. These results were then verified through contacting county clerks’ offices. Of the 29 counties in the Utah, have elected commissioners, while just six have elected county councils (Cache, Grand, Morgan, Salt Lake, Summit, and Wasatch). In addition, each county elects a clerk/auditor, treasurer, recorder, and assessor. In 2017, of the 69 county commissioners in Utah, 66 (95.7%) of them are men and three (4.3%) are women, who serve in the counties of Beaver, San Juan, and Sanpete. Of the six county councils with a total of 42 seats, 35 (83.3%) council members are men, while seven (16.7%) are women. It is also interesting to note that of the 42 elected county council positions, eight of them are “at-large” positions, representing the entire county; seven (87.5%) of these are currently held by men, and just one (12.5%) is held by a woman (Salt Lake County).

The Utah League of Cities and Towns lists 242 municipalities in the state. All but about 30 had websites with mayor information, and calls were made or emails sent to the remaining city or town offices. Of the 242 municipalities studied, currently 22 have mayors who are women (9.1%), reflecting an increase from the 7% we reported in 2014. Of those 22 mayors, three represent cities with populations of 30,000 or more; in Utah, 29 cities have populations of that size, which means that 10.3% of mayors of those cities are women. Most female mayors in Utah serve cities with populations of 10,000 or less.

For Utah, we collected data from every municipality in the state that had a council (N=241). We gathered information from websites, and then emails and calls were made to obtain the data that was not available online. In Utah, 24.1% of city/town council seats were held by women in 2016 (see Table 3 for council member numbers and percentages by municipality population). The four largest cities in Utah had the fewest women represented (11.5%), while all other population ranges had between 21.2% and 27.5% females serving in elected positions.

In Utah, eight of 15 (53.3%) State Board of Education elected seats in 2016 were held by women; however, in 2017 that number moved to 11 of 15 (73.3%). This is a significant increase from past years and puts Utah as one of the highest states nationally for the percentage of women on a state school board. Currently the Utah State Charter School Board of Education has three of seven (42.9%) seats held by women, but these positions are appointed, not elected.

To learn more about The Status of Women in Utah Politics: A 2017 Update read the entire brief. 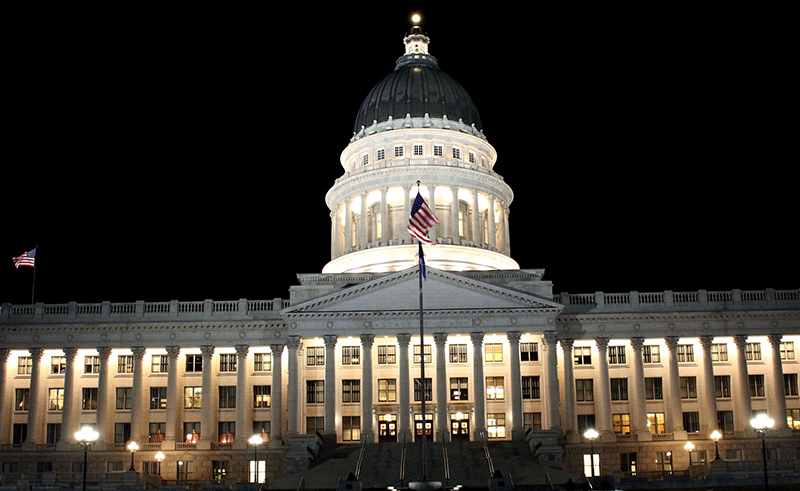