A group of tired-looking journalists was gathered in a second-floor conference room of the Ogden Standard-Examiner, learning how to shoot and upload video from their cell phones.

At the opposite end of the table, possibly the youngest guy in the room taught about A-roll and B-roll video composition. Then, a brief tutorial on how to take a cell phone screenshot. Before the meeting ended, the photo editor conducting the meeting told the group that these were skills any modern-day journalist should know.

It’s a “brave, new world” of juggling tasks, said features writer Becky Cairns after the meeting. She has seen the evolution of journalism first-hand, since she graduated from Utah State University with a degree in print journalism in 1978. Cairns learned the thrill of her first major byline while still in high school.

“I remember that was a pretty big thrill to me when I got The Salt Lake Tribune and there was my name in it, a byline on that story,” she said. “And they actually paid me money for it.”

Cairns was the editor of The Buccaneer at Cyprus High School in Magna. She planned to study English and teach, but her high school journalism teacher convinced her to give journalism a try, and that she could always change her major. She never did.

While a student at USU, Cairns interned for two summers at The Deseret News.

“That was a great learning experience,” she said of her internship. “They really just threw you in there, let you write.” The night before her first day, Idaho’s Teton Dam broke and flooded surrounding community. She arrived, met her editor and was immediately put to work.

“He said, ‘Sit at that desk, pick up that telephone, type down everything that the guy on the phone tells you,’” Cairns said of her first day as an intern. A reporter at the site of the broken dam was on the line.

“He was dictating his story over the telephone and I just had to type it all down,” she said. “The newsroom was crazy; people were running all over because it was this huge breaking story and it was just like being a TV movie or something. I was, like, ‘This is so cool.’”

Cairns said her internship gave her practical experience, and she would recommend a newsroom internship to everyone.

“I think the more experience you can get actually writing for a newspaper is a good thing,” she said. “It seems kind of obvious, but sometimes I don’t think people think about it.”

Though newspapers appear to be fading into history, Cairns said they are evolving with the times.

“It’s all about the storytelling, and we’re just trying to do it in more ways,” she said. “Instead of just writing a print story, maybe you would also be shooting a little bit of video, or taking some photos or doing all these different things to add different dimensions to the story. The basic goal hasn’t changed. It’s just that now there are different ways to get the message out there.”

The technology, however, has changed drastically. Upon Cairn’s arrival at the Standard Examiner, the paper had no website and she wrote all her stories on manual and electric typewriters.

“I know when we first got computers, that little piece of it was weird to me: that you just hit a button or just changed the story and your editor was going to get it,” she said. “I felt like I was missing something by not being able to take it over and put it on her desk.”

She said she felt “so old” the day she noticed a model of her first typewriter next to the linotype machine on a historical display in the lobby of The Standard Examiner’s headquarters. It’s important to be flexible with new technology, she said. Variety has never bothered her, either.

“I was one of those people who liked school,” she said.

School kept her learning and discovering new things, something she continues to do as a journalist.

“I do feel lucky to have a job that I’ve always enjoyed,” Cairns said.

Her advice for someone who wants the same gig?

“Be curious about the world around you,” she said. 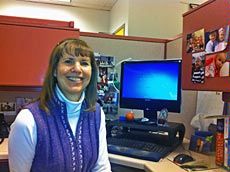 (photo from The Hard News Café)