Utah State University’s biofueled dragster has done it again. After a successful 2012 race season powered with yeast biodiesel, the Aggie A-Salt Streamliner, as the race car is officially known, topped 73 miles per hour this week during its algae-fueled debut. The roadster, with a .8 liter engine, was among competitors at the Southern California Timing Association’s 65th Anniversary Speed Week held Aug. 10-16, 2013, at Utah’s Bonneville Salt Flats.

“With this opportunity, we’ve demonstrated the beautiful cycle of transforming sunlight and carbon dioxide into energy,” says Lance Seefeldt, professor in USU’s Department of Chemistry and Biochemistry. “It also underscores the remarkable efforts of an interdisciplinary, USTAR-initiated project involving USU’s colleges of agriculture, science and engineering.”

Last year, the same vehicle sped to a land-speed record on yeast biofuel derived from the industrial waste of cheese production. That trial, the researchers say, laid the groundwork for the upgrade to algae fuel, which the team describes as “completely renewable.”

“Our yeast fuel is renewable, but it’s based on petroleum-fueled dairy production,” Seefeldt says. “Our goal is really the holy grail of renewable energy development — we want to develop a biofuel that can be mass-produced without the use of fossil fuels.”

The car’s performance this week represents eight years of hard work by “a lot of students,” says USU biochemist Alex McCurdy, a doctoral candidate in Seefeldt’s lab. “It’s the culmination of efforts by plant scientists who grew the algae, biochemists who refined the fuel, and mechanical engineers who built the car.”

Hefting a jar with 1.3 liters of golden fluid, McCurdy says it took about six pounds of dried algae and several years of research to produce the ‘liquid sunlight.’ With support from a U.S. Department of Energy grant, McCurdy, Seefeldt and undergraduate biochemist Michael R. Morgan, driver of the race car, joined professor Bruce Bugbee and his students in USU’s College of Agriculture and Applied Sciences, as well as professor Byard Wood and his students in USU’s College of Engineering, to streamline the process.

“Several groups around the nation are trying to mass produce algae biodiesel but it is difficult to lower the production costs to make it competitive with petroleum diesel,” says Curtis Adams, doctoral student in USU’s Department of Plants, Soils and Climate and a researcher on the project. “Lowering those costs is our research focus.”

Figuring out how to reduce costs requires a merger of plant physiology and biochemistry.

“We’re learning how to trigger production of biodiesel precursor compounds using precision stress as we grow the algae,” Adams says.

Most biodiesel in the United States is currently produced from soybeans, which are a source of protein for people and livestock.

“Soybeans have uses beyond biofuel that offset the cost of production,” McCurdy says. “Similarly, we’re working with private partners interested in growing algae for value-added compounds to offset the costs of algae biodiesel production.”

In terms of performance, USU researchers are now confident in the algae fuel’s ability to eventually compete with petroleum and more established biofuels.

“Our fuel-testing trials indicate algae biodiesel is comparable in performance to petroleum and mass-produced soybean biodiesel,” Morgan says. “And the emissions are cleaner.”

Seefeldt notes toxic oxides of nitrogen — known as NOx emissions — from petroleum diesel engines are a major cause of smog that obscures landscapes of Utah and beyond.

“Creating a fuel that reduces emissions could significantly improve air quality,” he says. 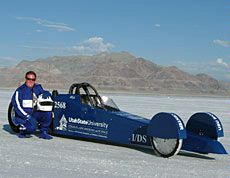 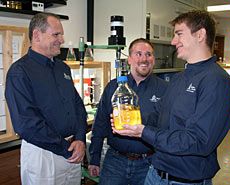