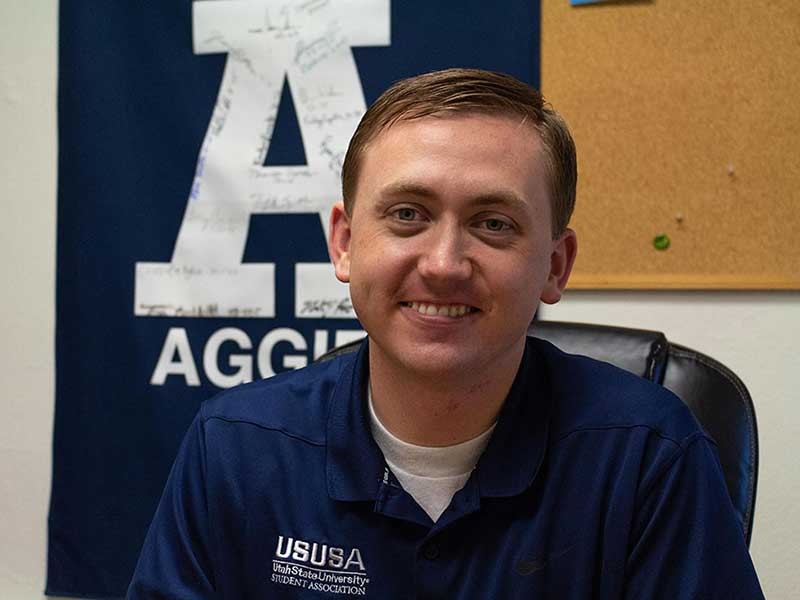 One that might not be expected is his work as an aspiring auctioneer.

Lake became interested in auctioneering as a senior in high school in Blackfoot, Idaho, where he first learned the art. He also enjoyed the cattle auctions he attended growing up.

Because of this, Lake is spending part of his summer at an auctioneer training course in Billings, Montana, where he will receive a certification in auctioneering.

Besides auctioneering, Lake also has a passion for agriculture and loves helping people understand the value of food and the importance of the farmers and ranchers behind the scenes of food.

He is both an agribusiness and plant science major and has an emphasis in horticulture and cropping systems.

Lake would like to go into lending or marketing in the agriculture business after he graduates.

His options for the future, he says, are “limitless.”

“The dual major gives me a lot of options, and, ideally, I’d like to work in ag financing or crop/cattle consulting. I mostly just want to use my passion and help agriculture succeed,” Lake said.

“He uses logic in all of his decisions and takes time to understand others,” Bitner said. “He isn’t afraid of having a contrasting opinion in a crowd which I admire greatly.”

As a past College of Agriculture and Applied Sciences senator, Lake was able to serve as a member of the Academic Senate, which increased his drive toward his new position as Executive VP.

Linda Zimmerman works in the Student Involvement and Leadership office, and has worked with Lake for two years.

Zimmerman said that Lake has a passion for those he serves.

“He is a great listener and is extremely responsible, cooperative and trustworthy,” Zimmerman said. “Dexton is thorough in making sure policies are in place and followed.”

Zimmerman admires that Lake’s caring nature and personality allows him to work well with others.

“Dexton brings an infectious energy and enthusiasm to USUSA and will work extremely hard to represent their needs,” Zimmerman said.

Lake is currently involved in many committees as part of this position. He will also be receiving a council called the Vice President’s chamber, an idea Lake came up with himself.

“Every other officer has some council beneath them except for me in this position,” Lake said. “In my mind, I thought, ‘Well, I don’t want to do this on my own,’ so I created a council.”

A priority of Lake and his council is the improvement of student fee transparency, with Lake serving as Student Fee Board chairman.

A fruit of Lake’s labors can already be found on the MyUSU tab of the university’s website. Lake worked with USU IT and the previous Graduate Studies senator to get a direct link to student fees on the site to make it more easily accessible.

“We are going to take great strides to make sure that students know of the student fees that are being proposed and when they are proposed,” Lake said. “We want to make sure there is feedback from students on how they feel about these proposals.”

Appropriately named “The Big Three,” another of Lake’s ideas will be to help improve student safety.

Lake and his council will also be comprising a diversity statement and video presentation.

“This diversity statement and video presentation encourages open-mindedness about our diversity, being kind to those who are different and making sure we are understanding of other people’s different beliefs, cultures and backgrounds,” Lake said.

When Lake isn’t busy with the many councils and committees he is a part of, he can be found relaxing with ice milk and an episode of the Walking Dead. He also enjoys Diet Mountain Dew and Johnny Cash.

He also likes to spend time with his wife and going on drives.

“There was one Saturday where I thought, ‘I’m just going to go on a drive,’” Lake said. “I literally went from Logan and thought that I was just going to Bear Lake, and then drove into Garden City and had never been to the Idaho side, so I drove on to Montpelier and back through Soda Springs and Grace.”

Lake isn’t a huge fan of living in Utah but loves Utah State. Being from a small town, Lake enjoys being able to get out and enjoy the scenery and different locations of Utah.
Lake’s advice for students is to find something to get involved in.

“I think the college experience is a lot better when you’re finding something that you want to do,” Lake said. “Academics are vitally important and that’s why you’re here. But employers are going to look for involvement and for how you’ve left your mark.”

Lake says that students can expect for him to be open to their ideas and they should feel free to voice their thoughts.

“I want them to come in here and tell me what they want to see,” Lake said. “Sometimes, they’re worried that there is some sort of gap between students and student leaders, and I don’t want that.”

Lake is looking forward to a busy and successful year ahead, with both short- and long-term goals on the horizon that he hopes to accomplish.

“I feel like I have a deep accountability to the students, and I’m going to carry it out,” Lake said.