Ben Quick, a former American Studies graduate student at Utah State University, has won the prestigious Pushcart Prize for “The Boneyard,” an essay featured in the March/April issue of Orion Magazine. Quick earned a master’s degree at USU in 2006.
The Pushcart Prize is a coveted award presented by Pushcart Press. Work by the prize winners, representing the best poetry, short fiction and essays published by small presses and magazines during the previous year, is assembled and published in an annual anthology. Magazine and small book press editors are invited to nominate up to six works they have featured. The annual anthologies of the selected works have been published annually since 1976.
Quick credits USU associate professor of English Christopher Cokinos with planting the seed for the award-winning essay and nurturing his prose into maturity during the time he was Cokinos’s student.
After leaving USU, Quick served as Beverly Rodgers Fellow in creative nonfiction at the University of Arizona, where he just completed a master’s of fine art degree. He lives in Tucson with his son, Sage, and teaches writing at U of A. He is currently working on a memoir that chronicles his solo journey through history and loss in Vietnam.
“The Boneyard” will appear with other Pushcart Prize winner in the forthcoming Pushcart Prize Anthology.
Quick joins a list of past winners, including another USU alum, Brandon Schrand and other literary notables that include Raymond Carver, Tim O’Brien, Charles Baxter, Andre Dubus, Susan Minot, John Irving, Rick Moody, Ha Jin and many more of America’s most respected authors.
Related links: 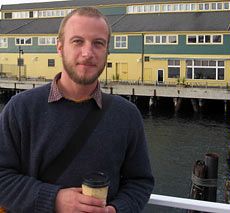 USU alum Ben Quick has earned Pushcart Prize honors for his essay 'The Boneyard.' Quick earned a master’s degree in American Studies at USU in 2006.