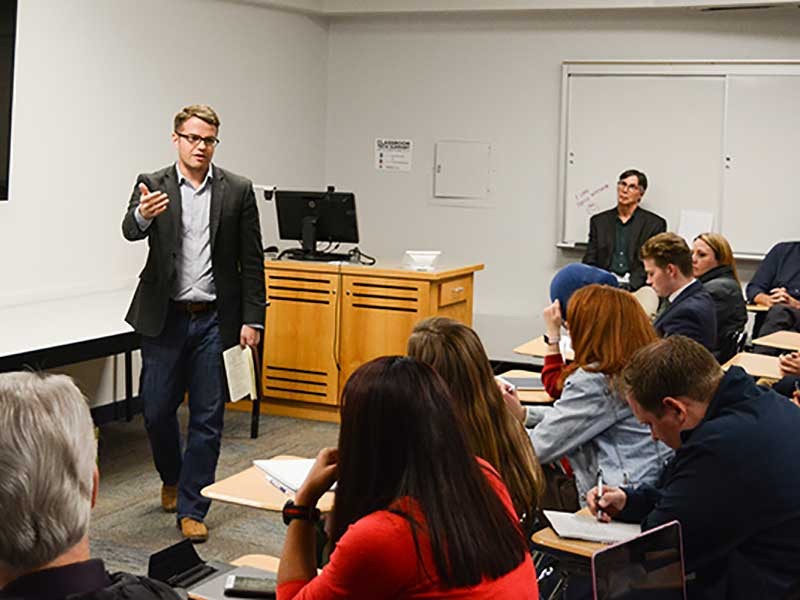 The Emma Eccles Jones College of Education and Human Services at Utah State University recently received a visit from David Yokum, the director of “The Lab @ DC” research office, to discuss a number of topics, including the best way for researchers in the social sciences to have an impact on their communities.

Presenting to a group of students and faculty, Yokum discussed two primary ways researchers can affect policy: presenting information to policy-makers in a way that is easily understood, and by working in research positions within government.

The language of research, particularly in academia, is different than the language of most people, Yokum said, stressing that learning to communicate clearly is a critical skill to develop.

The way information is expressed could be the difference between a researcher’s proposal being accepted or rejected. In mathematical terms, for example, 66.66 percent and two out of three are the same ratio. But it’s much easier for people to imagine the impact of two out of every three.

Yokum addressed other common researcher tendencies that unnecessarily complicate what they’re trying to express. Written research tends to become bloated, he said, with needlessly complex sentences and undefined acronyms. Taking some time to consider who will be reading the research and writing in a way to help them understand will make it more likely that the research is utilized.

As an example, Yokum shared a sentence from a methods section he encountered in a research paper he once read: “Participants read assertions whose veracity was either affirmed or denied by the subsequent presentation of an assessment word.” Regardless of the value of the research, a policy-maker or anyone else who might incorporate the research would get lost in such a complicated sentence. In common language, though, the paper could have simply stated that the research subjects were presented with a true or false question.

Job opportunities for researchers in the fields of behavioral and social sciences are rapidly expanding, Yokum said, and will continue to do so in coming years. A major driver of this trend is the desire of governments at all levels to bring in researchers to assist policy-makers.

In his current role, Yokum and his staff are part of the office of the Executive Office of the Mayor of the District of Columbia. The lab has pursued research projects as varied as understanding what causes kids to miss schools to how the city should handle requests to fix potholes. There is a feeling from many researchers, Yokum said, that research shouldn’t be mixed so closely with politics.

“I know that, as scientists, we are often frustrated with having politics infused into the debate and there’s an impulse to say that if we can get all of the politics out of it, the data will sing for itself,” Yokum said. “But I think that is naive and it is also wrong. I don’t think it should happen that way, simply because so many of the scientific decisions involved in the project are value judgements.”

During his time in the mayor’s office, and in his previous position as a founding member of the Social and Behavioral Sciences Team under President Barack Obama, Yokum said he has seen the policy benefits of being so close to those who are making decisions.

Yokum’s Social and Behavioral Sciences Team once began researching an education campaign for doctors to curb the amounts of medication being prescribed. Past psychological research had shown that people have a tendency to adjust their behavior to align with the societal norm whenever possible. Utility companies, for example, found they could slightly reduce energy costs by sending a letter to customers informing them of their usage. But the change became significant when the customers were shown their usage in comparison to their neighbors.

A similar plan to persuade doctors to reduce prescriptions was developed, and the research team was brought in to participate. The staff sent some letters with the comparison and some without, and then analyzed the response. In this instance, the doctor’s behavior did not reflect what the team expected. That information was valuable, though, as the policy-makers were able to pivot and develop a more effective plan rather than proceeding with an expensive plan that wouldn’t have produced the desired results.

Yokum was invited to visit CEHS as part of a monthly lecture series by the college’s neuroscience consortium. More information about neuroscience doctoral program can be found at neuroscience.usu.edu. 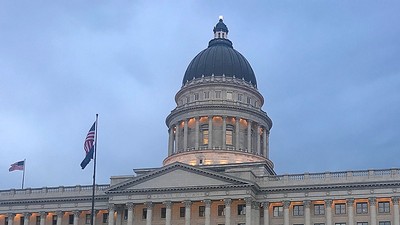