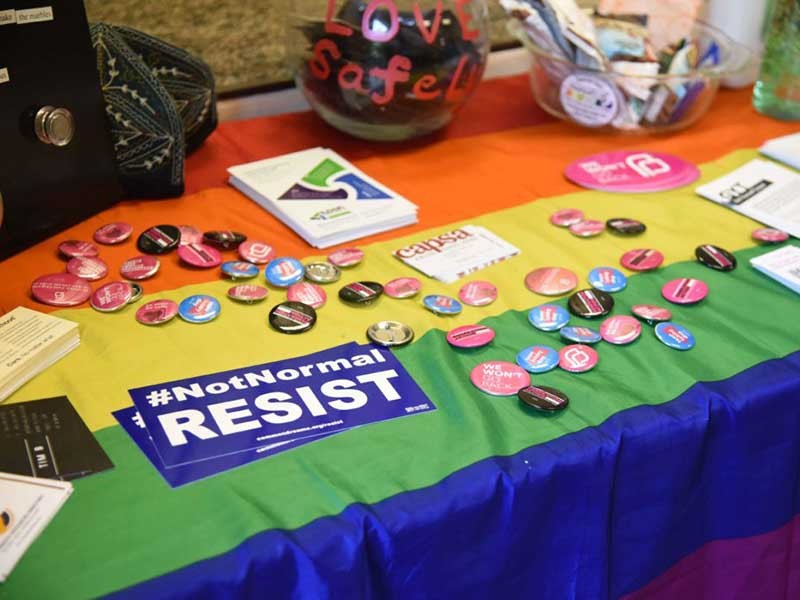 When Patrick Ferlin was younger, he lived in a three-bedroom house with 12 other people. The young LGBTQ+ man slept on top of the stairs and worked 14 hours a day at a local farm.

“There were just a lot of stressful things that go on, especially when you are a youth who doesn’t quite know your identity and where you belong in society,” Ferlin said.

Growing up, Ferlin struggled to understand why he felt different from the rest of his community. He  grew up in a sheltered community away from the idea of LGBTQ+ relationships.

“So when I found myself being attracted to the same sex, I had a really hard time understanding why or even how it was possible,” he said.

He reached a point where his internal conflict was eating him alive. That was when he had his
first suicide attempt.

“It was at that moment that I knew that I needed to reach out, but I didn’t know who to reach out to,” he said.

“Even on the first day, they just made me feel welcome, and accepted, and loved, and like all of my struggles and worries could just disappear while I was here,” he said. “I didn’t have to worry about who would be seeing me or if anybody knew I was here, I was just part of a community in which had the same kind of feelings and struggles that I did.”

Years later, Ferlin had the opportunity to give back to the community that helped him through that time of his life where he was struggling. He became the coordinator for the Cache Pride Center, formally known as the CYRC. The center is a safe place for LGBTQ+ youth and allies, he said.

“It’s just a place for people to come, be themselves and not be afraid of being who they are and stuff like that,” he said.

The CPC currently holds weekly meetings for youths age 14–18. In the near future, they plan to start holding meetings for youths age 10-14, and later they want to open up a group for adults.
During the meetings, the CPC provides the youth with a hot meal, counseling services, clothes, healthcare resources and shelter services should any of them find themselves in need of a place to stay.

What draws most of the youth to the center, however is the community it provides, Ferlin said.
“We have a very religious community here and a lot of them don’t accept our kids for who they are and what they want to become,” he said. “They kind of push them down and don’t allow them to express themselves in the appropriate way.”

Camrin Rivera, a volunteer at the CPC, said the sense of community is strong at the center.
“(The people that come here) feel supported and validated and excited to be with people they identify with, feel comfortable with,” he said.

Cassie Seikkula, the director of the CPC said it’s important for USU students and community members to know about the center because it’s a resource that can help people who are abused, having suicidal thoughts or are struggling with mental health. It’s a safe space and a place to hang out and connect with a community.

The center is also a place where people can go to ask questions without fear of retaliation or negative energy, Seikkula said.

Seikkula grew up in Arizona where there was a lot of diversity. She had a lot of friends who were LGBTQ+ in high school who were accepted and supported by her community. When she came to Utah, she was shocked at the difference. She remembered reading an article about the high suicide rates in the state and noticed how a large percentage of teen suicides were LGBTQ+ youth.

“It broke my heart, ‘cause I couldn’t imagine losing a single person in my life,” she said. “And I just didn’t realize how bad it could get.”

She said it’s sad to see a community that says they don’t want anyone to lose a life but refuses to support those lives. She believes people should be allowed to make their own choice about how to live their lives, as long as they aren’t harming themselves or others.

Adam Fisher, a graduate student in watershed science at USU and a volunteer at CPC,  said he started volunteering because he didn’t have a place like the center growing up and he wanted others to have that opportunity.

“Growing up gay is hard in a straight world,” he said.

Having support, acceptance, and love from people, whether they are family or acquaintances, is important for the LGBTQ+ community, said Lauren Zamora-Kelso, a CPC volunteer and a senior in business administration and marketing at USU.
“I’m LGBTQ+ myself, and I also know there is a lot of influence from different religions in the valley that can make it really hard on kids that are LGBTQ+,” Zamora-Kelso (who prefers to use the pronouns they/them) said.

They started volunteering at the CPC because they wanted to be that support for kids.

“I wanted to come here and be like, ‘hey, life might really suck right now, but it gets better and there are a lot of people out here that care about you, even if they hardly know you,’” they said

Meetings at the CPC start out with everyone gathering to talk about their weeks and catch each other up on what’s going on. Then dinner is served followed by check-in, this is where everyone goes around and shares their name, pronouns, high of the week, low of the week, and answer a random question of the day. Then the group has an activity or lesson. At the end of the meeting, the kids have to opportunity to get any resources they need such as clothes, food, hygiene products or more.

“My absolute favorite thing is knowing that I’m changing these youths’ lives and giving them a better positive outlook on the world,” Ferlin said. “They don’t have to worry about depression, anxieties, anything like that. They don’t have to deal with suicide risks, they have someone that they can reach out to and in any time just be like ‘hey I just need to talk,’ or ‘this is what’s going on, like, help me.’”

On June 30, the CPC will be hosting a pancake breakfast fundraiser 8–11 a.m. at the First Presbyterian church at 178 West Center Street. Admission will be $5 a person, $4 for students and $3 for children age 5 and under. There will be an opportunity drawing to help raise money for the center.

“Everyone is equal, everyone is great, everyone is awesome,”Seikkula said. “And, just, you know, you want everyone to feel loved and to feel amazing and to know they’re loved and amazing, even if they don’t realize it themselves yet.”