Before the building was even dedicated in 1965, faculty at the Water Lab were already working on international projects.
“These international projects have helped establish a close relationship between the UWRL and water agencies and universities in many parts of the world,” said Mac McKee, director of the Water Lab. “Through these relationships, USU has recruited students from around the world, many of whom now work as the world’s water leaders. Today, international students make up approximately 75 percent of the graduate students working at the Water Lab.”
In the 1990s the UWRL began working with An Najah National University in Nablus, West Bank, Palestine. Because few doctoral degrees are offered in Palestine, many ANNU students come to USU to obtain a doctoral degree, and they frequently return to work as professors and experts in their fields.
In summer 2007, associate professor in Environmental Engineering Laurie McNeill began her sabbatical at ANNU, where she taught and researched water problems the area currently faces.
The city of Nablus has a population of nearly 200,000 people, and during much of the year there isn’t enough drinking water available to the Palestinian people.
Due to the shortage, the city can only provide drinking water every few days, and residents have to stock up on water by storing it in large tanks on their roofs to use during the in-between days. While she was there, the time between water days increased from three to five to 10 days by the time she left in July 2008.
This system, in which water runs through pipes only once every few days, is called “intermittent pumping,” and many developing countries use this system instead of continuous pumping, which is used in America. Intermittent pumping can cause a variety of water problems that do not occur with continuous pumping.
McNeill and her students at ANNU worked to develop a model for intermittent pumping so they can understand how it influences water quality and predict future problems. They are also working to develop a model to analyze water quality in the storage tanks.
Not only does intermittent pumping pose potential hazards to the water quality, but the area is also susceptible to water contamination and potential cancer-causing agents.
Just as many water treatment plants in the United States add a small amount of chlorine to water to kill pathogens, chlorine is also added to the drinking water in Nablus. However, in less-than-ideal hygienic circumstances, this chlorine can pose a potential hazard.
When chlorine reacts with organic matter (such as raw sewage), it forms a disinfection by-product, or DBP, which can cause cancer. This is a real concern because some clean-water pipes in Nablus are submerged in flows of raw sewage.
McNeill and her students are trying to model this scenario as well so they can track how the chlorine changes in this system. Then they can determine when and how much chlorine to add.
“It’s a balancing act,” she said. “You need to add chlorine to keep the water clean and safe, but you don’t want to add too much in case organic matter comes into contact with the water and forms cancer-causing disinfection by-products.”
Nabeel Hamdan worked most closely with McNeill on this project. He is working toward a master’s degree and currently works as head of the engineering department in Beita, a town of about 10,000 people located south of Nablus.
“I’ve always been interested in everything related to water quality, and presently there is no information to help identify or quantify the location and extent of DBPs in the Nablus system,” he said. “I hope this research will help decision makers improve water quality here and benefit people around the world.”
The final projects McNeill worked on during her sabbatical dealt with wastewater treatment. One project tested a pilot-scale wastewater treatment process for removing contaminants.
The second project looked into how to run a sewage collection system where none existed previously, the logistics of installing a full-scale treatment plant and what opportunities were available for reusing the treated wastewater for irrigation. This is important because it is not uncommon for Palestinians to have cesspits, allowing sewage to seep into the ground and contaminate the ground water.
“This is just one example of what our faculty does daily,” said McKee. “Our mission involves helping solve water-related problems at the state, national and global levels, and our dedicated faculty make this goal a reality.”
Contact: Laurie McNeill, 435-797-1522
Writer: Annalisa Fox, 435-797-1429
November 2008 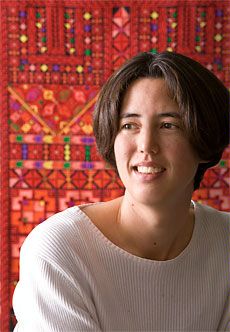 Due to the water shortage in Nablus, the city can only provide drinking water every few days. Residents have to stock up on water by storing it in large tanks on their roofs to use during the in-between days.