Utah State University biologists Joseph Mendelson and Edmund “Butch” Brodie say a fungus is threatening thousands of frog species. Why the hardy frog, which scientists consider a bellwether of overall environmental health, is rapidly succumbing to the fungal disease is a mystery. Mendelson and Brodie are calling for a massive campaign to rescue amphibians in the path of the pathogen, which is found throughout the world and is spreading with particular severity throughout South and Central America.
“This is an extinction event of a scale never before seen in human history,” said Mendelson, adjunct associate professor in USU’s Biology Department and curator of herpetology at Zoo Atlanta. “As such, it sends a signal that the global environment is changing in drastic ways.”
In an article published in the July 7 issue of Science, lead author Mendelson and Brodie, also an author on the joint policy paper, call for the formation of the international Amphibian Survival Alliance to stem the alarming decline. The scientists ask international governments to fund the effort and request a $400 million contribution over five years from the U.S. government.
“Inasmuch as humans are directly reliant on the environment, this phenomenon does require the serious attention of science, government and society,” said Mendelson.
Researchers have identified more than 5,700 threatened amphibian species. While habitat loss is a constant threat to frogs, a particular fungal disease, chytridiomycosis, is proving particularly lethal to the amphibians.
“Significant efforts in the field and the laboratory are necessary if we are to have any hope of understanding and controlling this emerging infectious disease,” said Mendelson.
Frogs play a huge role in every ecosystem in which they occur, he said. Frogs and their relatives feast on massive amounts of insects and also serve as meals for predators. If amphibians die, insect populations could skyrocket and threaten humans, livestock and plants.
“We’re talking about an entire class of vertebrate animals here,” said Brodie, USU biology professor. “Amphibians are the only terrestrial vertebrates with thin, moist skin that absorbs environmental toxins easily.”
Humans should worry when the group of organisms most susceptible to environmental poisons is going extinct, he said.
Contacts: Edmund “Butch” Brodie, 435-797-2489; brodie@biology.usu.edu; Joseph Mendelson, 404-624-5980, jmendelson@zooatlanta.org
Writer: Mary-Ann Muffoletto, 435-797-1429; maryann.muffoletto@usu.edu
Related Links:
Science article
USU Biology Department 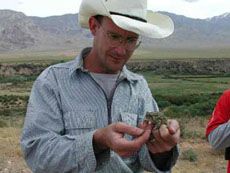 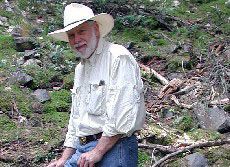 USU biology professor Edmund "Butch" Brodie is among a group of scientists calling for an alliance to aid amphibian survival. 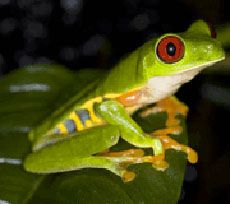 The Red-Eyed Tree Frog of Central America is among thousands of threatened species.