Irina Polejaeva, a new USTAR researcher who recently began her tenure at Utah State University (USU), is a pioneer in animal cloning technology.

Polejaeva comes from ViaGen, a livestock cloning and genomic company, where she worked as the vice president for research and development for eight years. In 2000, she led a team to clone the first pigs via somatic cell nuclear transfer.

Cloned animals, like pigs, are a necessary piece of the biomedical research puzzle. Because pigs are physiologically close to humans, more than other animals, like mice, organs and tissues from genetically modified pigs could be used for transplantation to humans.

Polejaeva is most interested in developing animal models for human diseases rather than xenotransplantation (the insertion of animal tissues into human bodies). To develop the most comprehensive models to map the progression of human disease, Polejaeva creates transgenic animals, which have specific genetic traits. This methodology allows Polejaeva and others to better understand how genetic makeup can influence the course of human disease.

Transgenic animals provide a necessary step in finding treatments and cures for human and animal disease. Other team members involved with the Veterinary Diagnostics and Infectious Disease (VDID) USTAR team will include an immunologist, chemist and infectious disease specialist.

VDID conducts interdisciplinary research leading to commercial opportunities in the areas of infectious disease and diagnostics. VDID draws on the strengths of USU’s College of Agriculture to tackle a $1 billion a year market in the United States for animal disease screening and diagnostics.

Although she’s been at USU only a few short months, Polejaeva already has several projects on her plate. Polejaeva and other members of VDID will use the BSL 3+ laboratory in the USTAR BioInnovations Center, located on the USU Innovation Campus, as well as laboratory space currently under construction in the new Agriculture building.

Polejaeva, an associate professor in the department of animal, dairy and veterinary sciences within USU’s College of Agriculture, is working collaboratively to better understand and find treatments for infectious diseases in humans and animals. As a contributor to the Utah Collaborative Arrhythmia Project (UCAP), Polejaeva will soon begin working with University of Utah researchers as well as scientists from USU’s College of Agriculture, including Chris Davies and Aaron Olsen.

“Loss of specific gene functions could cause Atrial Fibrillation,” said Polejaeva. “Several mouse genetic models are available to study AF, however due to the small size of the mouse heart, functional electrophysiology of transgenic mice can be challenging. If we create large genetic animal models with AF characteristics, we can better understand the disease, find better ways to treat it, and distribute life-saving knowledge worldwide.”

Polejaeva’s background in private industry research makes her exactly the sort of researcher the USTAR program was designed to attract.

Polejaeva’s connection to USU goes back to 1993 when she was a post-doc student in Ken White’s lab working on embryonic stem cells from cattle and mink. Following her work at USU, Polejaeva joined industry and worked with PPL Therapeutics to develop cloning technology. During her first month on the job, Dolly the Sheep was cloned in Scotland and Polejaeva began leading a project to clone the first pig.

Polejaeva’s industry background is a natural fit for the commercialization efforts underway at USU. The Commercial Enterprises team, a division of the office of Commercialization and Regional Development at USU, will work closely with Polejaeva to protect the intellectual property she develops. Commercial Enterprises will work closely with industry partners interested in capitalizing on USU-developed technologies—an investment for the future of the university and the state.

“USTAR is an excellent example of how states, like Utah, can enhance academic pursuits by commercializing university-developed intellectual property,” said Polejaeva. “These commercialized efforts will, in turn, enhance the knowledge foundation at Utah State University.”

The Utah Science Technology and Research initiative is a long-term, state-funded investment to strengthen Utah’s “knowledge economy” and generate high-paying jobs. Funded in March 2006 by the state legislature, USTAR is based on three program areas. The first area involves funding for strategic investments at the University of Utah and Utah State University to recruit world-class researchers. The second area is to build state-of-the-art interdisciplinary facilities at these institutions for the innovation teams. The third program area involves teams that work with companies and entrepreneurs across the state to promote science, innovation and commercialization activities. More information is online or follow USTAR on Twitter. More information about USU USTAR is on the website or follow on Twitter. 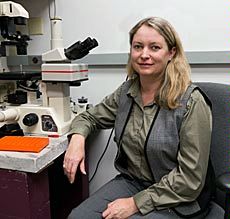 Irina Polejaeva, new USTAR researcher, is a pioneer in animal cloning technology. In 2000, she led a team to clone the first pigs via somatic cell nuclear transfer. Cloned animals, like pigs, are a necessary piece of the biomedical research puzzle.