When Coy Whittier graduated from Utah State University in May 2009, he had a few accomplishments to brag about.
Whittier was presented the Bill E. Robins Award for Man of the Year and served a successful term as Arts and Lectures vice president for the Associated Students of Utah State University, where he brought educational and inspirational speakers from across the country to USU students. He even played the bongos in a local band.
Today, Whittier can add “provided personal laptops to help enhance the education of 85 children in Rwanda” to his list of accomplishments.
Yes, a laptop. A fully functioning laptop for each of the 85 children in the fifth grade class.
Whittier, along with other USU students and alumni, are part of a non-profit organization called Ungana Foundation (pronounced oon-GAH-nah). Created and run by USU alumni, the foundation is working to make a difference by bringing people together to enact change. The name “ungana” means “come together” in Swahili, the language of Kenya, Africa.
In the summer of 2009, the Ungana Foundation members have headed back to Rwanda. Members include Alyssa Callister, Ungana Foundation president (bachelor’s marketing); Whittier, communications associate (bachelor’s journalism); Alexander Erickson, managing director (bachelor’s international business); Dave Kenika Kuwada, health care associate (bachelor’s finance and economics); Ashley Linford, programs associate (a senior in international studies); and Greg Allan (bachelor’s computer science).
“Ungana is focused on what we believe are the four pillars of development: education, entrepreneurialism, health and environmentalism,” Callister said. “Ungana has moved ahead with projects in Gisenyi, Rwanda, and Goma, Congo, based on these core missions.”
What gets the foundation most excited is its partnership with the One Laptop per Child (OLPC) Association, a non-profit organization that provides the XO laptop to the world’s poorest children.
OLPC describes the XO laptops as a small machine with a big mission.
“XO is a potent learning tool designed and built especially for children in developing countries, living in some of the most remote environments,” reads their mission statement. “It’s about the size of a small textbook. It has built-in wireless capabilities and a unique screen that is readable under direct sunlight for children who go to school outdoors. It’s extremely durable, brilliantly functional, energy-efficient and fun.”
The laptops allow children to write stories and add pictures, share activities with other students, draw pictures, learn English by creating their own memory activities, surf the Web, use an encyclopedia, write reports, learn along with their teachers, email pen pals on the other side of the world, teach their parents how to use a computer, create simple computer programs and play problem-solving games.
“A whole new world of educational possibilities is waiting to be discovered,” Whittier said. “In partnering with OLPC, the Ungana Foundation believes that, when given the right tools, children are capable of doing amazing things; even in the most remote places.”
Fifteen years ago, Rwanda crumbled under tragic genocide. The country's gross domestic product (GDP) fell by almost 80 percent, the government was completely dismantled and millions of Rwandese were left traumatized.
“In my personal experience, I have seen a resiliency in these people that is unmatched,” Erickson said. “They are innovating, rebuilding themselves and flourishing as an example to the East African community. However, Rwanda is a dense nation of 10 million people, 90 percent still in poverty. It has a long way to go.”
Providing the XO laptops to the class was one of many ways the Ungana Foundation is helping rebuild Rwanda.
“It really was incredible to see their amazement as they booted up what was now their first trip into the information age,” Whittier said. “During the next few months, and then for the rest of their lives, they will be able to progress like never before.”
When the group presented the laptops, the children immediately started testing the capabilities of the machine.
“The children instantly began taking pictures, searching for more information in the Wikipedia program and drawing pictures of their houses,” Whittier said. “Until now, the children have been entirely dependent on others for their education, awaiting instruction from the overworked, underpaid teachers. With the introduction of the XO, children can supplement the education given them in school with their own interest-driven activities, with a healthy dose of problem solving and hands-on discovery.”
On July 10, the group was able to present the XO laptops at a large expo sponsored by the Rwandan Ministry of Education that included speeches by prominent officials, workshops, informational briefings and a demonstration of the XO put on by students who had received a laptop.
“During the presentation, one of our students logged onto her XO, opened the Web browser, and searched for images of Rwanda’s president Paul Kagame,” Whittier said. “She then wowed them with her ability to copy an image to the clipboard and paste it in a text document, then write a sentence about the president. That’s after two weeks of having the XO for one hour per day.”
This is just the beginning.
“The Ungana Foundation and students from the University of Kinshasa (involved in OLPC Corps) have extensive plans for the deployment, including having the children designing their own schoolhouse on the XO computers that will then be constructed by the Ungana Foundation,” Callister said.
The implementation of the XO computers is just one of the many ways these USU grads are doing their part to bring education to Rwanda.
“It is my hope that our organization can make a difference here,” Erickson said. “We are giving our all to build the best supplemental primary education program, and we want to see Rwanda utilize its natural resources to the fullest, however small they may be.”
For more information on XO laptops and OLPC, watch their videos on YouTube.
Video one
Video two
Contact/Writer: Sarah Reale, (435) 797-2759, sarah.reale@usu.edu 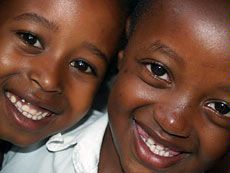 Children from the fifth grade class who received their very own XO laptops. 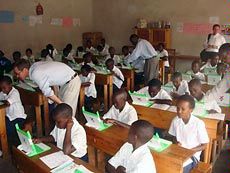 The Rwandan children booting up and learning how to use the XO laptop for the first time. 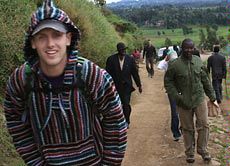