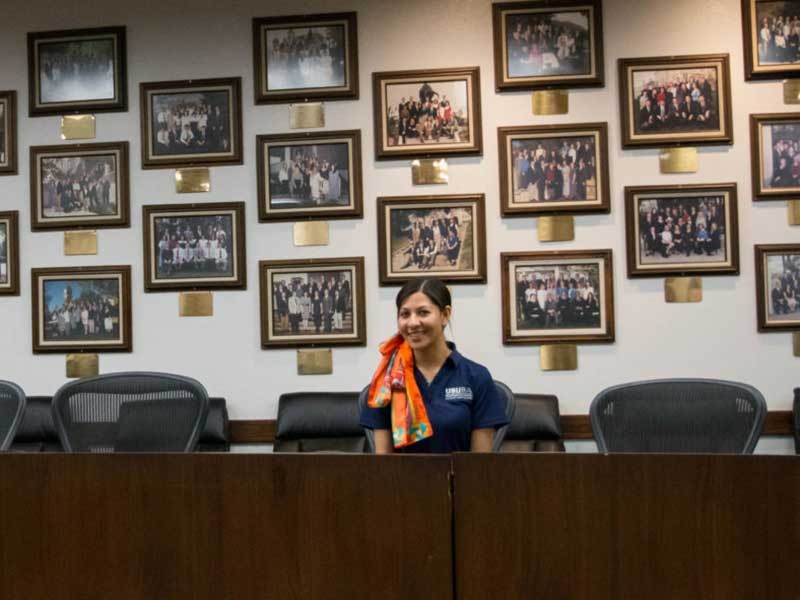 Photos of Frida Kahlo, Alexandria Ocasio-Cortez and other powerful women adorn the office wall of Paulina Rivera-Soto, newly elected USUSA student advocate vice president. For her, they are reminders of her identity and inspiration for the future. Rivera-Soto says that everything she has accomplished in her life so far has helped prepare her to be a leader in her new USUSA position.

Rivera-Soto spent several years of her childhood living in Honduras with her family. Later, they moved to Logan, Utah when her father received a position at the university.

Nereyda Soto, Paulina’s mother, explained that, at first, the move back to the United States was a little difficult for the family, but that experience has made Paulina the person she is today.

“You see Paulina today and she has all kinds of friends. That is just to prove that that did not affect her and I think it made her stronger,” Soto said.

As a child, Paulina says she enjoyed being outside, was very free-spirited and knew she could do anything she set her mind to.

“At one point, I thought I was going to be some kind of warrior princess. Growing up, I was fortunate that my parents never limited me. The thought of not being able to do something because of gender or skin color never crossed my mind. I knew, growing up, I could be anything I wanted to,” Rivera-Soto said.

Rivera-Soto attended a local STEM high school in the valley. Coming from a small graduating class, she was excited to try out the different extracurricular activities Utah State University offers. She enjoys being involved in various university organizations and was selected by the Sigma Phi Epsilon fraternity as last year’s “Sig Ep Sweetheart.” But there is one thing that she says makes Utah State extra special for her.

“My favorite thing about Utah State is the people. Our students are the beating heart of the university. Without us, there would be no Utah State. It is not about the place, but it is about people,” Rivera-Soto said.

Paulina has chosen to study political science and hopes to be a lawyer in the future. With her new position in the USUSA, Paulina wants to help educate and advocate to students that they can receive access to free legal services on campus. She plans on accomplishing this and making sure that all students at Utah State feel safe in and outside of the classroom. Paulina also says she wants to share her passions of female empowerment and service through her position.

Those who know Paulina know that she is loyal, full of passion and a very driven person. Sam Jackson, friend and member of the Sigma Phi Epsilon fraternity, explained why Paulina was the perfect fit to be student advocate VP.

“She always knows what she is talking about and is very well spoken. I think it is pretty hard to faze her. I admire her ability to work through types of conflict and resolve it in a way that is productive,” Jackson said.

Paulina said she is “completely unapologetically myself.”  Through staying true to herself, Rivera-Soto is excited to help bring about positive change to campus and help everyone around her feel like they have a place at Utah State.