The effects of recent protests in Ukraine and the subsequent military action in the Crimean peninsula have reached across land and ocean into the lives of students at USU.

Josh Barton, a master’s student in management information systems, has family living in Kiev, Ukraine’s capital. His father works for the U.S. Agency for International Development and is the current mission director for the agency in Ukraine.

“It’s not so bad now that the protests are over,” Barton said.

According to Barton, when violent protests were in full swing in February, his family had to stay indoors a majority of the time. His sister’s school was canceled and only recently reopened.

There is still some worry about safety; however, that worry has decreased greatly in the past few weeks.

“There are still a little less friendly feelings towards others,” Barton said.

Anti-government protests began in Kiev on Nov. 21 when then-president Viktor Yanukovych announced the government was going to abandon a deal that would strengthen ties to the European Union and was instead going to seek closer ties with Moscow.

The protests became more violent by the beginning of December. Protesters removed cobblestones from the streets to use as weapons against police. The police responded in equal violence, resulting in the deaths of many protestors.

The largest outcry against the violence occurred after government snipers shot down dozens of protesters on Feb. 20. By the end of the protests, 82 people had died.

According to Barton, the scene at Independence Square in Kiev is different now. The cobblestones have been replaced and the road-blocks are being carted away. Memorials are now set up in honor of the fallen.

The protests began to decrease when Yanukovych fled Kiev on Feb. 21. Within days, the interim government assigned presidential powers to Olexander Turchinov, the speaker for the Ukrainian parliament.

However, Ukraine is still not at peace. The transition in government brought an outcry in the Ukrainian peninsula of Crimea. Pro-Russian protesters took to the streets in the region on Feb. 23. On Feb. 27, masked gunmen seized government buildings in Crimea.

By March 1, pro-Russian troops occupied the region. On March 11, the regional parliament in Crimea voted to become independent of Ukraine. Five days later, a referendum was passed that annexed the region to the Russian Federation. On March 18, Russian President Vladimir Putin signed the referendum into law.

The referendum has not been recognized as legal by the U.S.

More shots in this stage of the conflict were fired Saturday when pro-Russian troops stormed a Ukrainian air force base.

According to Robert Nalbandov, an assistant professor of political science at USU, the conflict stems from several levels of confrontation.

First, Ukraine is divided between the pro-Russia east and the west. This leads to an identity conflict, as Russia sees Ukraine as a barrier between Russian and Western ideology.

“Any Western look by Ukraine is seen as seditious,” Nalbandov said.

This creates a conflict between Russian and Western values.

“If you were to hold an anti-American contest, Russia would hit first place. Not Iran, Russia,” Nalbandov said. 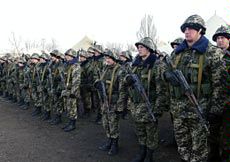 Ukrainian reservists line up for photographers at a newly established base near the Russian border. (Photo courtesy Roy Gutman/MCT, published in the USU Statesman Online)